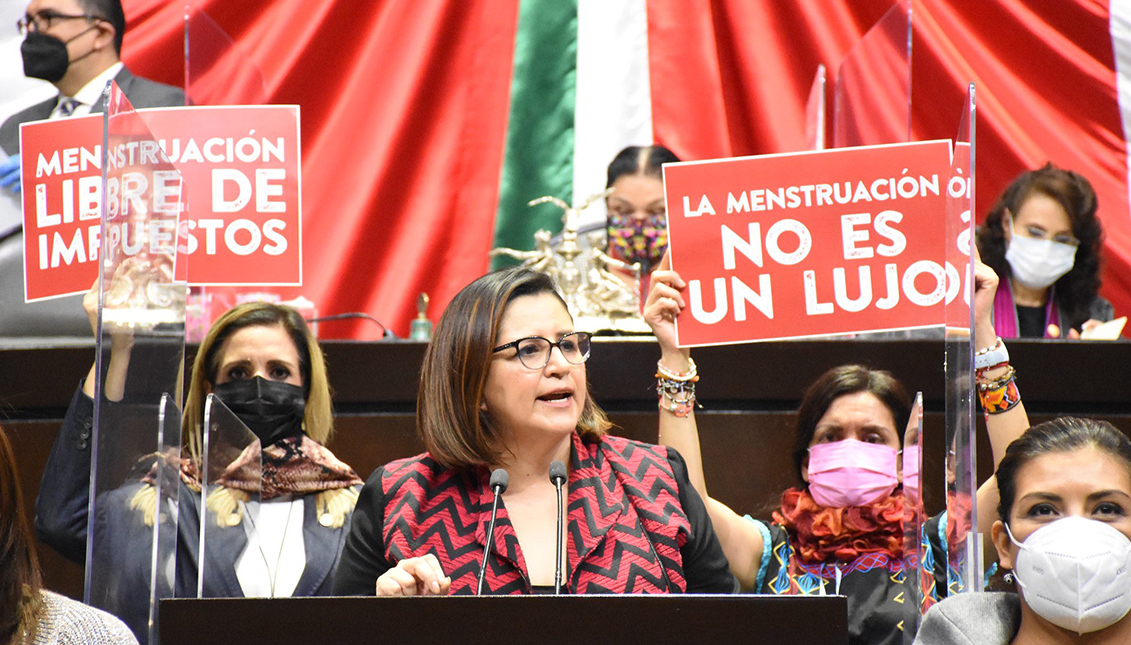 Martha Tagle defended the right of women to a dignified menstruation in the Mexican Congress last Wednesday, Oct. 21. Photo: @MarthaTagleMed

Mexico: "You can't pay taxes for your Period"

In a country where 63 million women menstruate, intimate hygiene products are still a luxury for few.

Last September, at the proposal of the group Menstruación Digna, the deputy of Movimiento Ciudadano Martha Tagle achieved what seemed difficult in a country where the gender perspective is conspicuous through its absence. She raised a proposal to eliminate 16% VAT on sanitary towels, tampons, menstrual cups and intimate wipes to the country's Chamber of Deputies.

Tagle denounced that women could no longer pay a tax related for a biological process that increases inequality, especially for those with less income, and that the products should be considered basic necessities and distributed like food or medicine in schools and neighborhoods for free.

"You can't pay a tax for menstruating. If in this tribune we have discussed and approved tax adjustments on other types of goods that affect the personal economy, such as medicines or food, what would be the difference with the products of menstrual management," said the deputy of Morena, Wendy Briceño.

"Eliminating this tax, which only women pay for a physiological process that we go through naturally, is a matter of tax justice, with which we have to start looking at the issue of taxes," added the Rep.

The issue is not minor. It includes more than 63 million Mexican women, girls and adolescents who currently menstruate, according to INEGI data. Of them, and according to the research center Fundar, four out of 10 live in poverty.

In fact, if a woman menstruates for an average of 2,535 days in her life — about seven years — "we need 360 towels or tampons a year, that is, 720 pesos a year, which is equivalent to 5% of the total expenses of a 10% poorest household in the country, which is a lot," said Fundar.

How the African American Museum of Dallas seeks to change perspectives on the African experience in the Americas
April 8th, 2022
Artist from Cartagena presents his work in Mexico
March 30th, 2022
Do beauty pageants have a dark side?
March 1st, 2022
For the "zero rate"

However, in Mexico menstruation is still a taboo subject and the proposal submitted to Congress to reform Article 2 of the VAT law to include these products with a "zero rate" failed in the Chamber of Deputies.

With 218 votes in disagreement, 185 in favor and 11 abstentions, the congressmen threw out the measure, hiding behind the fact that it was not possible in the midst of the health crisis and that it would harm the companies in the sector.

While in other countries, such as Colombia, the tax on menstruation no longer exists and there are similar initiatives in regions such as Argentina.

Not everything has been in vain, however. The proposal has served to promote the debate on a necessary fiscal policy with a gender perspective in Mexico, in addition to putting on the table once again the unequal access of women to health and the economy.

According to a recent study by the organization Acción Ciudadana Frente a la Pobreza, in Mexico there is a 16% wage gap between men and women in paid jobs. This is compounded by gender inequality and sexist divisions of unpaid domestic and care work.