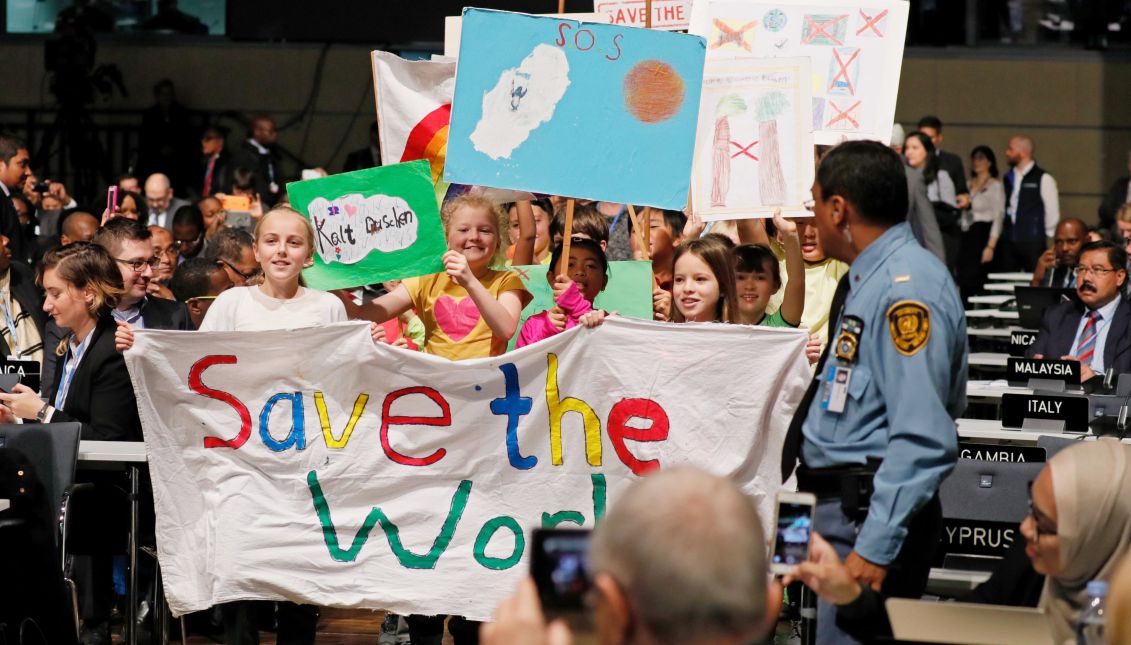 Children carry protest banners in front of the venue where the UN Climate Change Conference, COP23, is held this week in Bonn, Germany. EPA-EFE / RONALD WITTEK

Climate Change Summit in Bonn: More Justice for the Planet

The COP23, attended by 25,000 participants from 200 countries, started on the 6th and will close on the 17th. One of the dominant slogans has been denouncing…

You may think that Bonn - the former capital of West Germany - is too far from home, like the Arctic, where the ice melts at a dangerous speed and countries like Norway compete to open the North Pole for oil exploration. But what happens in Bonn this week is important to you and to the members of your future generation.

Since November 6, delegations from 200 countries around the world are meeting in the German city to discuss proposals to reduce the emission of greenhouse gases and reduce the impact of global warming in the coming years.

Organized under the United Nations Framework Convention on Climate Change (UNFCCC), the so-called COP23 summit aims to "prevent dangerous anthropogenic interference in the climate system," that is, to stop global warming.

The guidelines that are taken in the framework of COP23 - which ends on Friday, November 17 - are important because the planet is significantly feeling the extreme weather conditions caused by global warming (see the recent hurricanes that affected Houston, Florida or Puerto Rico, where the native population continues to suffer in the attempt to recover its normal life after two months since it was hit by the hurricane and subsequent floods, or forest fires in California and Portugal).

After the summit of climate change in 2015 (COP21), most countries of the world - including the US under Obama's mandate - agreed to sign the historic Paris Agreement. The objective of the treaty was that each country should set targets to reduce CO2 emissions to ensure that the global temperature rise remained below 2 ° C.

However, the Trump administration decided in early summer to withdraw the US from the Paris agreements, remaining practically isolated. Even Syria, which since the war was outside the treaty, has shown its commitment to join.

The fact that the second richest and most polluting country in the world decided to withdraw from the agreement has had an unexpected effect: "an unprecedented wave of support for the treaty," wrote Christiana Figueres, spokesperson for the Sierra Club environmental platform. "He supported the world's resolution on climate action, and that's why we can all be grateful."

The Trump administration's proposals to promote the coal and other fossil fuel industries seem surreal in an environment where most governments agree to promote clean energy. China has shown its firm commitment to develop clean energy, aware of its high dependence on energy resources from abroad.

Not only the US is in the spotlight of the protests of environmentalists, scientists and organizations fighting against climate change. Environmental activism has taken advantage of the Bonn summit to show its discontent with the Norwegian government, for allowing new oil prospecting in the Arctic, taking advantage of the thaw.

Environmental organizations - including Greenpeace - have filed a lawsuit against the government of Norway, alleging that oil exploration in the North Pole goes against the Constitution and endangers the fragile Arctic ecosystem. In 2015, Norway licensed 13 multinational oil companies, including Statoil, Chevron (USA), ConocoPhillips and Lukoil (Russia), to begin the explorations in the Barent Sea, according to La Vanguardia.

The legal action brought by Greenpeace alleges that according to article 21 of the Norwegian Constitution, the State is committed to guaranteeing the right to a healthy environment for its citizens, as well as to manage natural resources with future generations in mind.

On the other hand, a group of 21 young people from the state of Oregon recently filed a lawsuit against the federal government accusing it of "doing nothing" to prevent the effects of climate change and violate the rights to life, freedom and the environment protected in the Constitution of the USA.

Among the plaintiffs is the granddaughter of NASA scientist and climatologist James Hansen, famous for announcing global warming because of the boom in CO2 emissions in 1988.

Under the COP 23, Hansen has called on countries to file lawsuits against major oil, coal, gas, and cement companies for damages caused by climate change, National Geographic reported this week.