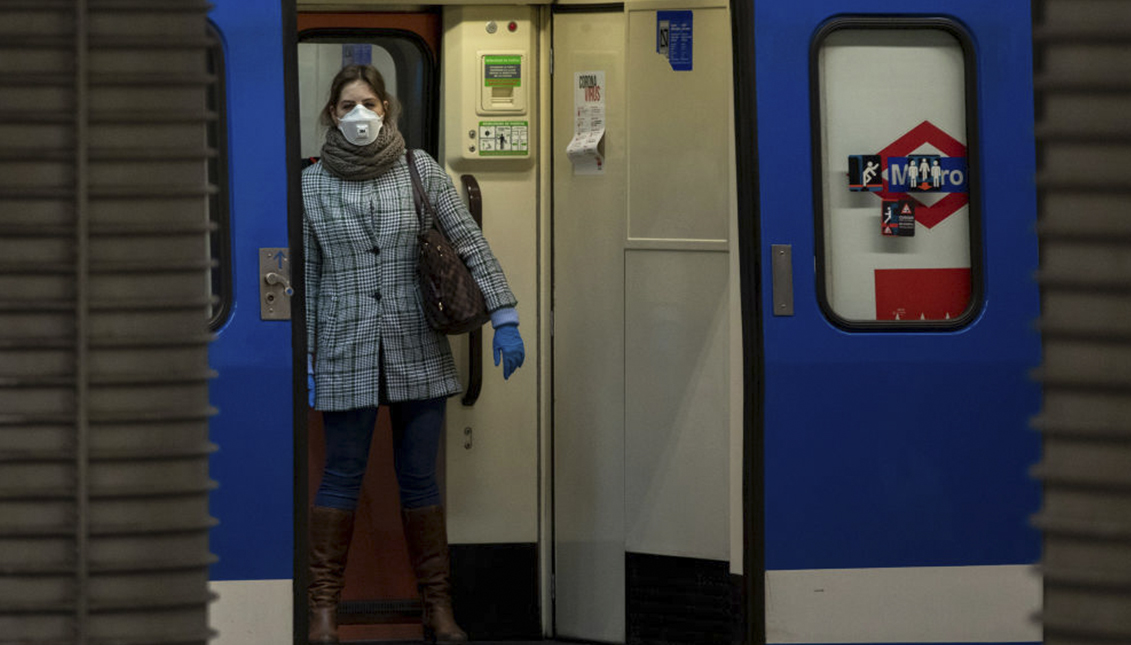 MADRID, SPAIN - MARCH 16: A woman wears a protective mask inside a subway train at Atocha train station as the country works to stop the spread of the coronavirus on March 16, 2020 in Madrid, Spain. (Photo by Pablo Blazquez Dominguez/Getty Images)

The situation must get even worse, experts say. However, it is difficult to imagine a stranger scenario than the one we are currently experiencing in Europe.

This morning I found myself running from a man who was asking me for an address. "Go to the mountain," I said, without even listening to what he was looking for. I was wearing a mask, he wasn't. I was walking the dog - I had an excuse to break the confinement - he had just got off the tram. He was the only passenger.

Since the Spanish government declared a national coronavirus alert last weekend, the streets have become silent; the supermarkets have emptied. There is no talk of anything else, but one meter away from each other.

There are patrols on the streets all the time watching to make sure no one leaves their home except for one good reason: to go to the pharmacy, to pass by the tobacco store, to buy cans - my partner has built a bunker of canned goods and packets of cookies.

In a single day, 152 people died in the country; we've already had almost 300 deaths. Some say we are on our way to Italy, which has 1,800 deaths from the virus, most of them, the elderly and people those with pre-existing medical conditions.

We hear a lot. Too much. The information is good, until it echoes.

The Internet has become the only window to the world and a way to raise global awareness about healthcare, following all the hygiene advice and not visiting anyone. Lock yourself in. There are many lonely people in their homes tied to their computer or alternatively, TV screens. But the Internet is also a way to spread rumors.

The only good thing about this situation is that we are finally back to caring about each other.

There's also plenty of opportunists, selling their latest book set in a world ravaged by an epidemic.

"I told you so." They use the blurb to make a profit.

Even the silliest of them upload videos for or against wearing masks. Now you've stop hearing children play in the street - they are now miniature biological weapons - but the cell phones keeps ringing. They ring all the time, full of threads and images of endless queues at supermarkets, or messages from supposed Taiwanese doctors who recommend you hold your breath for more than 10 seconds to make sure your lungs aren't necrotic.

Panic travels faster than the virus. And we have found ourselves experts in its spread.

The only good thing about this situation is that we are finally back to caring about others, to miss the hugs, to miss a father, a friend, the neighbor who always stops you in the street. It's alienation for a good cause.

The best thing is that, at least in Europe, we understand that everything is connected. Our public health system, though flawed, works. Above all, its workers work, the health professionals who, in the face of the silence and stupor from the Spanish government during the first days of uncertainty, took the initiative of informing and organizing themselves to avoid collapse. In Madrid, the epicentre of the infection, they dedicated themselves to sending action protocols to other hospitals as the pandemic spread.

For us, the most fortunate, there are only growing numbers and a white fear, of uncertainty.

In the next few weeks, a peak in contagion is expected. COVID-19 is multiplying at a dizzying rate.

However, it will pass. By how much? Fifteen days, two months? Six? There will be human and economic losses. We're already suffering them. But there is no doubt that below this anxiety that some confuse with symptoms of the coronavirus - "I cannot breathe", a friend wrote to me a few days ago - there is strength and there is unity.