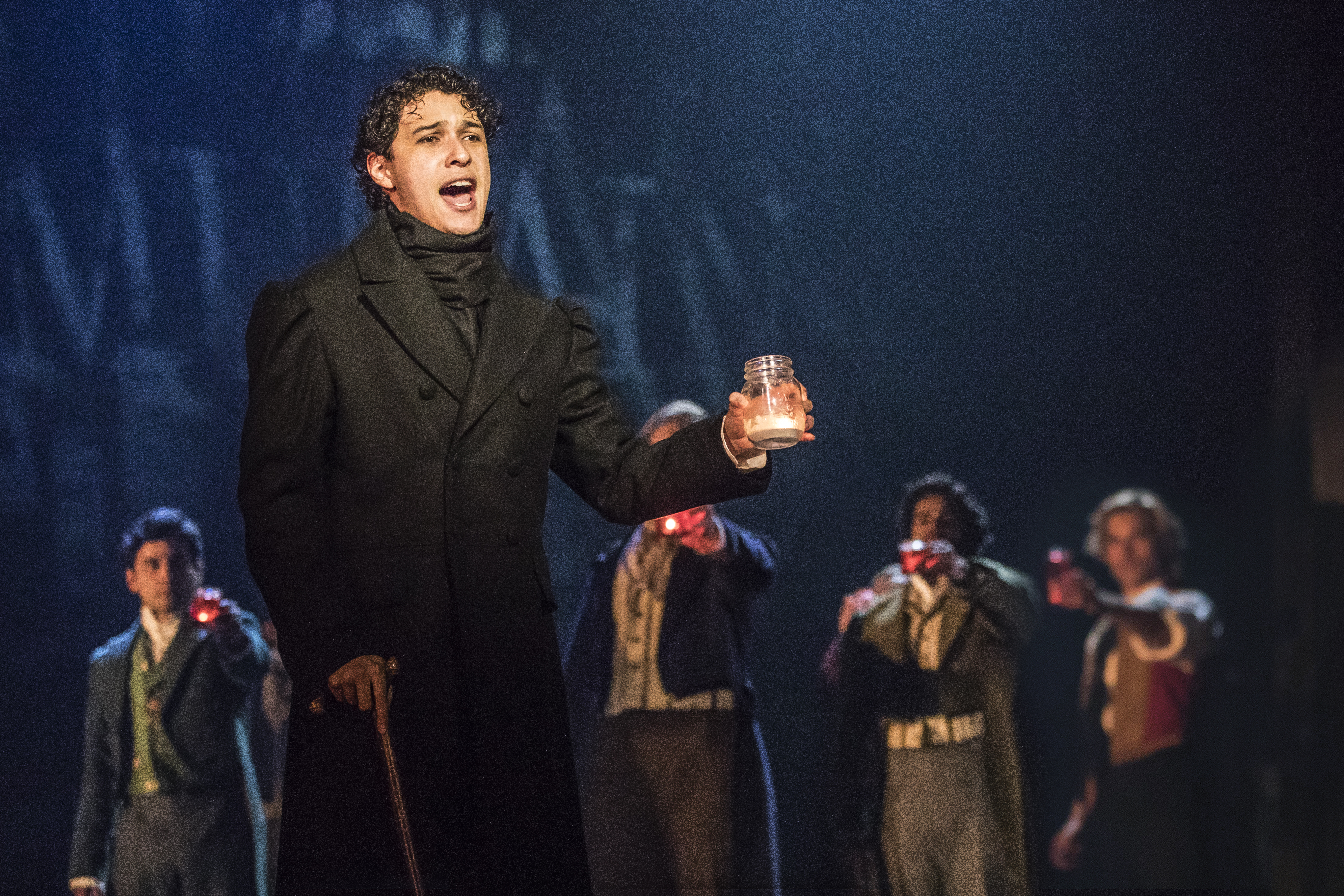 Joshua Grosso as Marius in the second act of Les Misérables, singing the song "Empty Chairs at Empty Tables". This photograph is provided by the national tour's official photographers. All rights are reserved to them.

Joshua Grosso, a Colombian-American and recent Carnegie Mellon graduate, has been stunning audiences with his powerful vocals and impressive theatrical éclat…

"Here they talked of revolution,

Here it was they lit the flame

Here they sang about tomorrow

A young forlorn actor runs his fingers in desperation through his dark waves, his eyes echoing sadness and a yearning for the phantoms of rebellion and love lost. Friends, comrades, the in-laws, all of the people that have struck a chord in this character’s life have died for the cause of liberté, égalité, and fraternité.

Joshua Grosso sings from the bottom of his soul, in a rich timbre that oscillates between baritone and tenor tones, bringing dimension to his role of Marius and bringing the audience to an awed, reverent silence.

My date turns to me and breaks through the chill-inducing vocals and sorrowful atmosphere enshrouding The Academy of Music with a whisper in my ear:

“Jeeeeeeeeeeesus, that kid has some pipes on him."

Do You Hear The People Sing?

Grosso was born in Colombia in 1994, but left with his parents before he could barely crawl.

However, his early immigration did not detract from how rooted he has felt in his heritage.

Having spent his childhood in places with predominantly Hispanic populations- 9 years in Queens, middle and high school in Plantation -and having mastered the language of his homeland, Grosso is a proud and proficient Latino.

The strength of his Latin American identification would end up surpassing the norm, surpassing merely being able to communicate with relatives, claiming Colombian diasporic experience, or relating to Remezcla memes.

Being able to speak Spanish- or, more specifically, sing in Spanish -would launch Grosso into a promising professional trajectory in the theater world.

“Getting into singing was honestly on a whim. I had never considered it. I was driving in the car with my dad one morning on my way to school- I must have been about ten or eleven years old -and an ad on the radio was calling for auditions for a Christian singing contest en español. My dad and I just looked at each other for a while there, and then he suggested that I give it a try. Well, I was blessed enough to win that, and ever since I have been singing and acting.”

Blessings continued to rain down on Grosso, and it wasn’t just a little fall of rain, but chief accomplishments that would fortify the foundation for his dreams in stage acting.

A Jimmy™ Awards win at 17 for his portrayal of Raoul in The Phantom of The Opera bestowed him with the title of “Best Performance by an Actor”. The National High School Musical Theatre Awards show and program were filmed that year by PBS for the documentary Broadway or Bust, which scouts were surely monitoring with a keen eye (and ear).

An acceptance to Carnegie Mellon University’s prestigious and highly-selective theater program would be solidified in his audition when Grosso nailed a Shakespearean monologue Ye Olde English-to-Spanish translation.

The most impressive part of this offbeat college application?

The translation was done “on the spot".

He Dreamed A Dream

Most graduates take some time to make their flight from the nest of campus life to “the real world”, but upon graduating from Carnegie Mellon in 2016, a curveball was thrown at Grosso by the name of Usnavi.

Casted as the main character of Lin-Manuel Miranda and Quiara Alegría Hudes’ Tony and Grammy Award-winning original musical In The Heights, Grosso said that he has never felt more honored to be in a show where he “finally had an excuse to tap into other Latino culture that I knew of and that I was familiar with.”

It may have been the role he was born to play, given that he spent so many of his formative years right by the location where In The Heights is set (Washington Heights).

As a Colombian playing a Dominican, Grosso says that he felt like he had a “huge responsibility” to make sure that the accent and that the pronunciation of vernacular jargon was appropriate, for the importance of the piece lies in a Latino group being represented through art.

“It was beautiful. Once you do plays and musicals like In The Heights, it gives you an opportunity to dig deeper and deeper into other cultures and into your own, and acting in a different language is something really hard, and unique, and beautiful, because the little safety that you have when processing things in English is gone. So, at least to me, it’s a whole different version of vulnerability. When you’re out there in front of an audience, and you’re speaking Spanish, I want to sound as authentic and vulnerable as possible! I am incredibly proud of the word I did for The Pittsburgh CLO.”

And from then on, the blessings kept pouring down.

Grosso went from Dominican heartthrob to French revolutionary (and awkward romantic) in the span of a year. 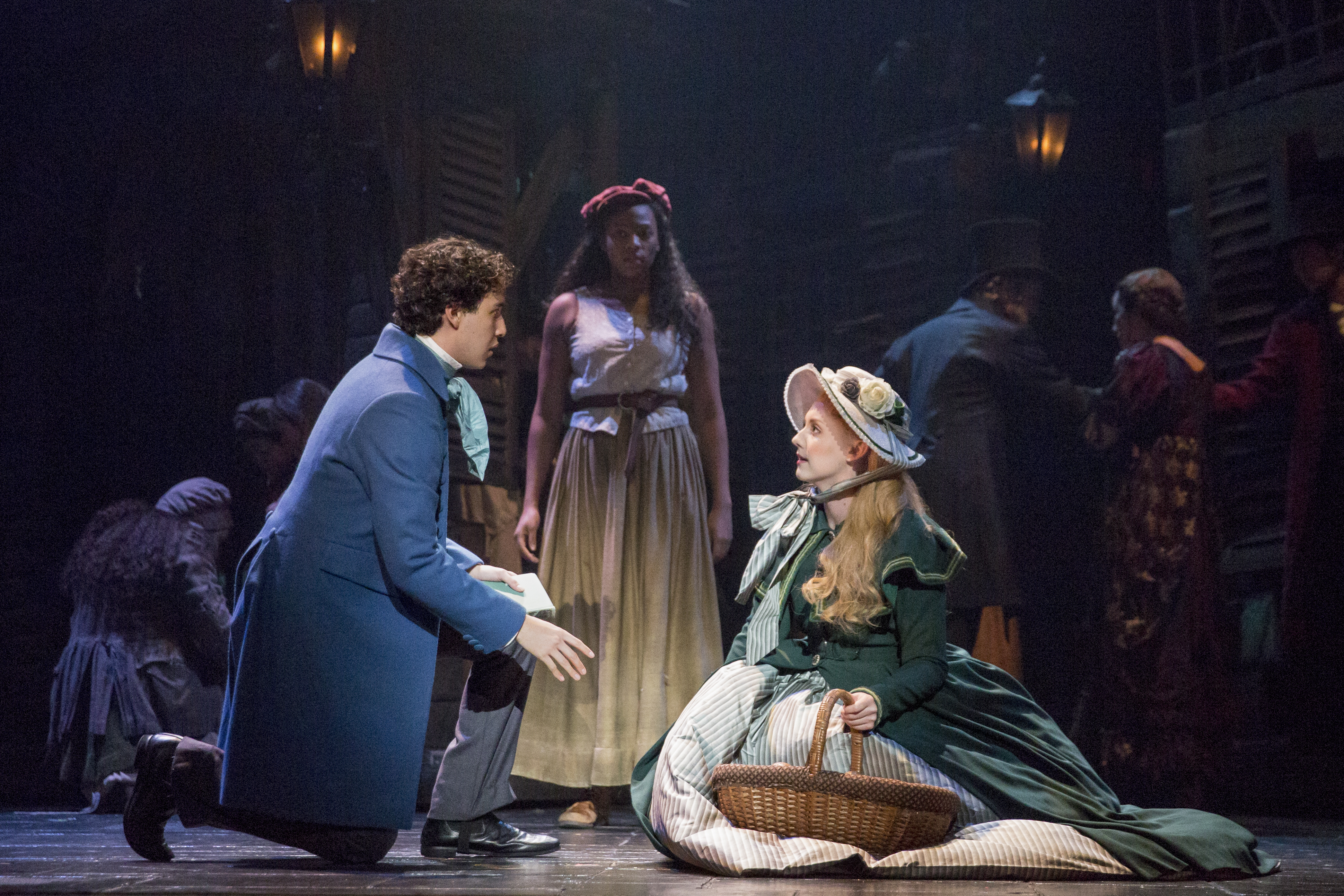 A Heart Full Of Love

"I never saw Les Miz in theater, I only saw the movie”, he laughed, poking fun at himself on the phone. “But, I did read the book, and you know, like all 800 pages of it. With characters, I like to read what other scholars have said about them in essays, and then I read about the author and what state of mind and history he (Victor Hugo) was in when he wrote it. YouTube is a great tool too, and I was able to dibble-dabble with hundreds of videos.”

It paid to “dibble-dabble”, for Grosso was subsequently cast as Marius Pontmercy- one of the protagonists -for the Les Misérables national tour.

A typical week as a touring theater star consists of about nine shows per week, which Grosso admits is “pretty grueling.”

Nevertheless, Grosso feels lucky with his cast, and had nothing but praise to gush over during our interview. He mentioned that he enjoys having “sprinkles of Latino folk” in the cast (his understudy is, coincidentally, Colombian, and another understudy is Dominican).

This may justify why people living through modern-day political turbulence would want to sit and watch an often tragic musical on 19th century social and economic strife. Les Misérables remains one of the top five longest running musicals on Broadway.

“The themes of redemption, of good versus evil, of forgiveness, wickedness, and especially love, are pertinent in today’s society. There will always be an underdog, there will always be people fighting for what is right! I mean, yeah, almost everyone you love in the musical ends up dying, but as cliché as it sounds, the two survivors and the theme that ties the entire piece together is love. Hemingway once wrote that ‘the world is a fine place, and worth the fighting for,” and I think that sums it up pretty nicely.”

It isn’t too late to watch Joshua Grosso and the rest of his spectacular cast belt their hearts out (and break a few) on the barricade whilst waving the red flags of rebellion.

The show will be running at The Kimmel Center until this Sunday, January 21st 2018.