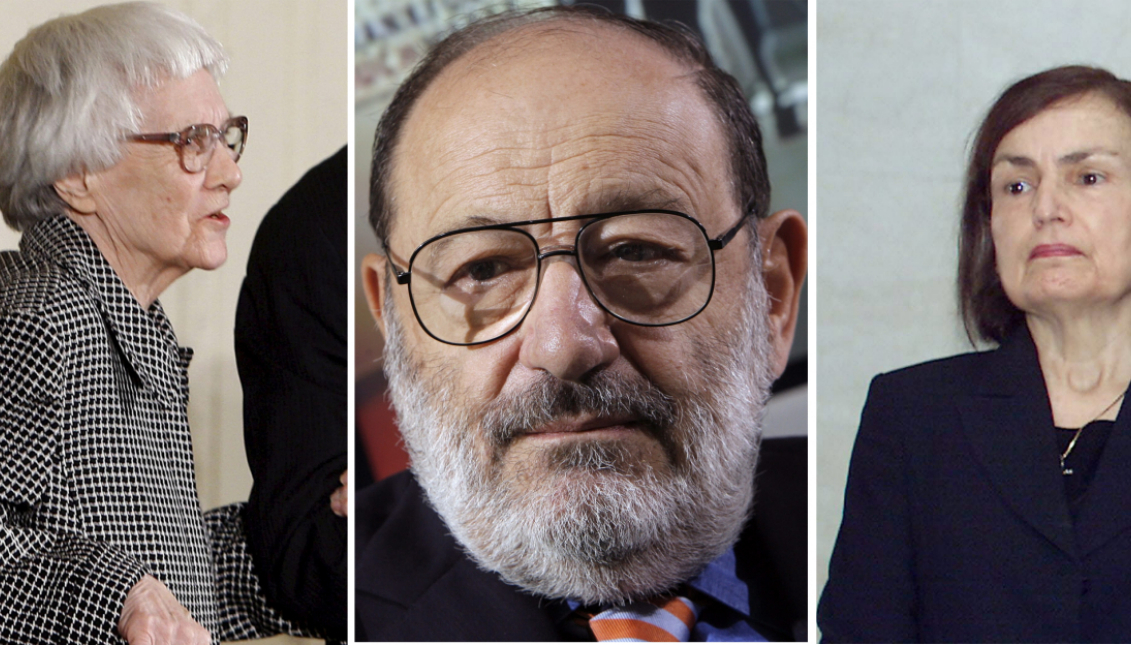 Yesterday was a terrible day for those of us who love literature. Three distinguished writers died: Harper Lee, author of "To Kill a Mockingbird;" Umberto Eco,…

Yesterday was a terrible day for those of us who love literature. Three distinguished writers died: Harper Lee, author of "To Kill a Mockingbird;" Umberto Eco, author of "The Name of the Rose;" and Rosario Ferré, the Puerto Rican writer best know for "The House on the Lagoon."

Before Jem looks at anyone else he looks at me, and I've tried to live so I can look squarely back at him. — from "To Kill a Mockingbird

Harper Lee, 89, was arguably one of the best known and most beloved American novelists. Remarkably, she attained this with one slender novel, "To Kill a Mockingbird," published in 1960 which earned her a Pulitizer Prize and a Presidential Medal of Freedom (in 2007). The reclusive writer was propelled into the spotlight last year when a second novel, "Go Set a Watchman," was published after a long back and forth about whether she was mentally competent enough to give her full consent. In a testament to the enduring appeal of her first novel, "Go Set a Watchman" broke sales records the day of its release.

But Lee will always be best remembered for "To Kill the Mockingbird," a novel that is required reading for a full two-thirds of American students, and which was adapted into a tremendously popular, Oscar-winning movie starring Gregory Peck. The story of southern lawyer Atticus Finch, and his children Jem and Scout, is a story that interrogates the American sense of justice in the face of our history of racism.

Lee's characters are vivid, the writing deceptively simple, and the effect lingering. President Obama said Lee had “changed America for the better.”

I did not know then what Brother William was seeking, and to tell the truth, I still do not know today, and I presume he himself did not know, moved as he was solely by the desire for truth, and by the suspicion - which I could see he always harbored - that the truth was not what was appearing to him at any given moment. — from "The Name of the Rose"

Who would have guessed that a book about a Franciscan monk-logician trying to solve the murders of monks at a Benedictine abbey and scriptorium would become a worldwide bestseller? Probably not Umberto Eco, 84, the Italian semiotician, academic and author, who died Feb. 19 and who reportedly penned the novel because he felt "like poisoning a monk."

The book melded mystery with history with philosophy, and provided us with a memorable hero (and memorable antagonists and ancillary characters) in a satisfyingly complex setting that made us forget we were reading Latin quotes, hearing medieval intellectual and religious debates, and chasing down clues amid age-old signs and symbols.

While I went on to read and enjoy another of his semiotician's mysteries — 1988's "Foucault's Pendulum" — it is the library, and the books worth dying for in "The Name of the Rose" that I best love about Eco. Even a middling movie version of the book, starring Sean Connery — recognizes that at the heart of Eco's work is reverence for words and books — their wondrous and dangerous mutability and power. What writer could possibly resist that?

By 2000, when Eco was awarded the prestigious Prince of Asturias prize from Spain for his literary contributions, he had already been accorded 23 honorary degrees from institutions of higher learning across the world.

The day we shot this scene, this was the day I first met the great #UmbertoEco. https://t.co/AAQhknlwjy

Nothing is true, nothing is false, everything is the color of the glass you’re looking through. — from "The House on the Lagoon"

Anglophone readers may be less familiar with Rosario Ferré, than with Lee and Eco, but she is held to have revolutionized Puerto Rican literature, and her death at 77 is a huge loss for both English- and Spanish-language American literature.

Ferré, the daughter of ex governor of Puerto Rico, Luis Ferré, was a champion of Puerto Rican independence, and of the island's literary and cultural patrimony. A feminist, poet and critical essayist, Ferré's novels dealt with sexism and racism on the island. Her first novel written in English —" The House on the Lagoon," 1995 — earned a nomination for the National Book Award. It's critical success prompted her earlier works to be translated into English: "Maldito amor" became "Sweet Diamond Dust" and "Los Papeles de Pandora" was issued as "The Youngest Doll." Her most recent work in English was the 1998 novel "Eccentric Neighborhoods."

"I spent the last year at college writing my thesis about her works and the notion of the island-victim in Puerto Rican literature." wrote Julio Ricardo Varela, founder of the website Latino Rebels and a member of NPR's Latino USA editorial team. "I don't think there is any other author who has influenced me as much as she has. Rosario taught me to not be afraid of sharing the Macondo situation of Puerto Rico."

Ferré was the recipient of a Guggenheim fellowship, an honorary degree from Brown University and multiple international awards for literary achievement.

Sad to hear of the passing of Rosario Ferré, Puerto Rican writer of fierce intelligence and generous soul.
~•~... https://t.co/RpTUBupHqJ