Naida Saavedra is a venezuelan writer of fiction, literary critic, and professor. newlatinoboom.com

Naida Saavedra is a researcher and writer who has dedicated her recent years of work to describing the New Latino Boom movement.

Even before the United States was formed, Spanish was spoken in several regions including present-day Florida. This was the language of the Spanish colonizers that was later itself colonized, banned, and stigmatized — along with its speakers — by the colonizing Anglophone culture that passed over its roots like a steamroller.

The victorious become vanquished and, as history unfolds, it will happen again.

With the continuous waves of migration from Latin America, and the farmworker, and the civil rights movement organized in universities, a paradox emerged.

While Spanish continued to be a language associated with the humbler classes who spoke it at home, a renewed interest in the Latin cultural heritage began to grow from intellectuals and academic institutions. This was especially true for the so-called “Latin American boom” writers of the ‘60s and 70's — Julio Cortázar, García Márquez, Vargas Llosa, Elena Garro, or Silvina Ocampo.

Then, of course, there was the border literature written in English, with Rudolfo Anaya or Gloria Anzaldúa at the forefront, and well into the ‘90s, the emergence of the Latino Boom with authors like Junot Diaz. New Latino Boom, coined by writer and critic Naida Saavedra, is a literary phenomenon particular to our times supported by advances in technology and social media that have changed the way we communicate and live our realities. This book takes us on a journey through the three cities -Chicago, Miami, and New York- where this phenomenon flourishes, promoted by the authors themselves and the cultural agents that have created a space for the most spoken language in the United States after English..  newlatinoboom.com
So, where did the written and published literature in Spanish in the United States go?

Naida Saavedra, a professor at the University of Worcester (Massachusetts) and a writer, began to detect the new winds of change in literature written by Latinos in the United States at the beginning of the 21st century.

Around the first decade of the century, small independent publishing houses began to emerge and give shelter to the “radical” intelligentsia — or “cultural resistance.” This meant self-managed magazines and festivals, and a whole network of editors, managers, and writers who used Spanish as a vehicular language.

It was a purely American and Latin American phenomenon where women artists finally began to stand out, not only as writers but also as editors, journalists, and cultural agents.

Writers such as Giovanna Rivero, Keila Vall, Cristina Rivera Garza — director of the first doctoral program of Literary Creation in Spanish at the University of Houston — or journalist Maritza Bafile have crossed over with their works.

The result was the essay #NewLatinoBoom: Cartografía de la narrativa en español en EE.UU. (The BeiSMan PrESs, 2020), as well as a foundational website and a sort of “manifesto” of a phenomenon whose influence extends both to the cultural past and the future of the Latino community.

“Latin American authors based in the United States no longer have to look only to Spain, Mexico, or Argentina to publish their works written in Spanish,” says Saavedra.

“Latin American authors based in the United States no longer have to look only to Spain, Mexico, or Argentina to publish their works written in Spanish,” says Saavedra. She spent a few years researching the movement and interviewing its protagonists and witnessed an increasingly growing trend that is going to turn the Anglophone-supremacist cultural landscape on its head.

“What we’ve seen is not the literary production per se, but the commitment of publishers to publish here in Spanish, fighting against the big U.S. publishing apparatus,” Saavedra told AL DÍA in an exclusive interview. “In a political context like the one we are living in this country, they have organically been occupying spaces and have not succumbed to writing in English.”

That is why the researcher defines as an act of resistance this impulse to save the culture from the dominant language. A small but united Spanish-speaking Galia extends across the nation, with three major urban meccas. A Latino intellectual bastion in the Midwest’s very center may sound surprising, especially to anyone who hasn't dived into the cultural hotbed of Pilsen.

Latino and literary Chicago began around 1992 when a group of intellectuals founded the magazine Fe de erratas. It was created as a pioneering space for migrant scholars who continued to study and write while working in the industry. Like the writer and playwright Raúl Dorantes, the editor of BeiSMan Press, Franky Piña — at the time a transgender activist —, the editor of Ars Communis, the Argentine Fernando Olszanski, creator of the “Literature of Uprootedness,” or the mythical magazine Contratiempo.

“All of them have the particularity of emerging from the working class and bringing to the United States the literature they were already doing in their countries of origin. They didn't stop writing after migrating,” Saavedra points out.

Being a grassroots movement led writers and publishers to establish relationships with cultural centers and bookstores while taking advantage of the Internet to make room for themselves in university language departments. And, of course, to build bridges — or rather, highways — with sister cities. Who hasn't heard of the Nuyorican Poets Café or the Nuyorican authors who made this iconic city the center of their stories? It is a whole New York imaginary coded, for the most, part in English.

And also, incipiently, in Spanish.

The Big Apple is the city that has woven more links between the protagonists of the NLB and the academic world, thanks in part to the courses and master's degrees offered by CUNY, which, as Saavedra reminds us, is not a single center but the “largest educational system in the United States.”

An Argentinean "road movie" wins the first edition of the SED Prize for novels in the U.S.
February 22nd, 2021
The 'New Latino Boom': The Garcia Marquez of the United States the world needs to read
October 27th, 2020

From its doctorate in Latin American, Iberian and Latino Cultures (LAILAC) emerged some of the city's most active migrant authors, such as the founding members of Chatos Inhumanos, a publishing house that became a key point of literary production in Spanish with a New York twist.

Ulises Gonzales, the co-founder of Chatos, is also the director of Los bárbaros magazine, a platform for Spanish-language fiction that has been publishing since 2014.

Also, there is the publishing house Sudaquia Editores, directed by Asdrúbal Hernández, which has a close relationship with Latin American authors and, as much of the NLB, is in constant dialogue with the continent.

Although there are multiple bilingual or Spanish-language master's programs dedicated to creative writing — not only in New York but in Iowa and Texas — perhaps due to the cosmopolitan aura of a city that never sleeps the offer of gatherings and meetings in Spanish in the Big Apple is wide. And bookstores such as McNally Jackson or Barco de Papel are outstanding places.

Like ViceVersa Magazine, directed by Mariza Bafile, they’re a vital part of this new cultural impulse of Latino pride and creation in the city of skyscrapers.

But it is not always easy to build a school in all the NLB's flagship cities. Still, its members resist. 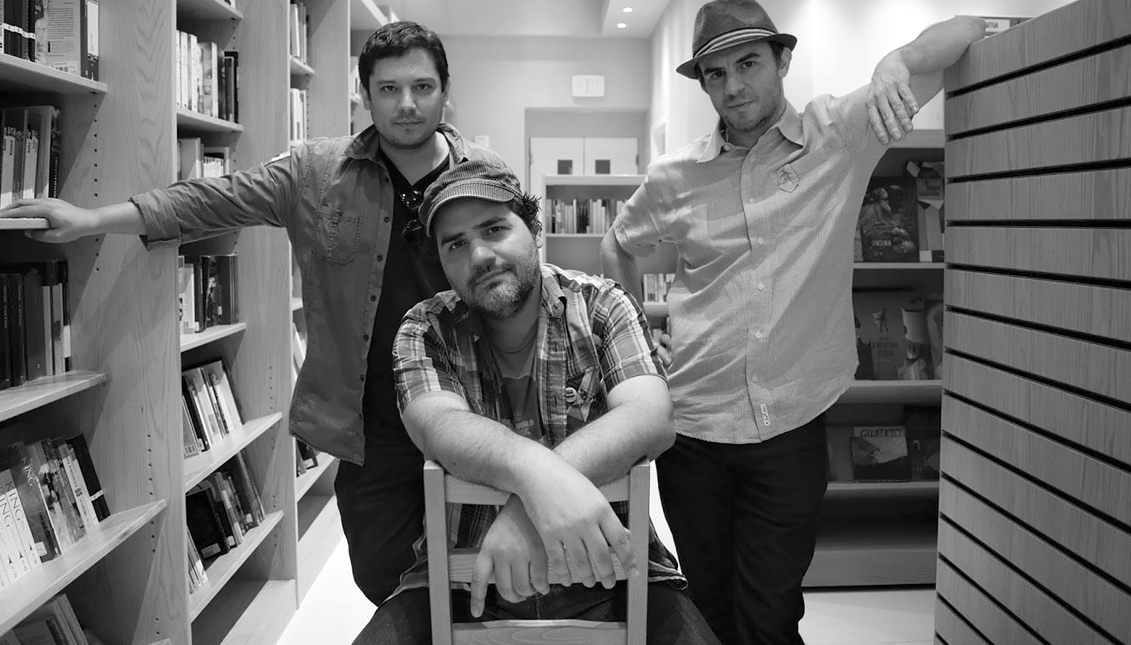 Pedro Medina León, Eduardo Villanueva, and Hernán Vera Álvarez are the founders of , a Miami magazine that vindicates Hispanic American literature and culture in the city.  newlatinoboom.com
Miami

Although an author “is” the city where they reside, and while they let the landscape enter their chronicles, stories, and poems, it is the migratory experience orbits in the books.

And in the case of South Florida literature, it plays a central role.

“Miami is home to the oldest tradition with Cuban immigration since the 1960s, and its exponent is the Latino Boom, which tropicalized English. It happens that Cuban-American culture is studied from a local perspective; it is based on nostalgia for the island and dialogue with Cuba, but not with the rest of the country,” Saavedra points out.

A Miami writer and editor, Pedro Medina León, has created his brand through books like Streets of Miami or Varsovia, where Miami's speech beats out from the page. We could even define it as a subgenre in itself: “Miami literature.” Medina, together with Hernán Vera, founded Suburbano Ediciones, the publishing vanguard of the NLB that has brought to light numerous anthologies of Miami authors writing in Spanish.

The paradox is that, even though the city breathes Latinidad everywhere and hosts the celebrated Miami Book Fair — whose Ibero-American Authors Program is directed by another woman, Mariela Gal — bookstores with books in Spanish are scarce. This is why both Suburbano and the rest of the cultural agents have embraced the eBook format and digital market to answer the many problems of distribution.

The writer Carlos Fuentes used to say that the Spanish Language has become the homeland. At a time when we’ve become aware of how globalization democratizes while tending to focus only on “majority” phenomena, large minorities have opened their path and embraced the canons to subvert them.

We live in times of change, and the New Latino Boom, as Naida Saavedra advocates, is here to stay.

Keep on reading in Spanish via www.newlatinoboom.com.