A clear message to Congress

Bill against 'sanctuary cities' set to vote on Wednesday

A snapshot of Mexico’s indigenous cultures

Mexican judge: ‘El Chapo can be extradited to the U.S.’

A decade of 'carnavalero' pride on display in South Philly

Papo Vázquez is 'Jazzin’ Up Spring' at Taller Puertorriqueño

The Library of Congress drops 'illegal' and 'alien' to describe immigrants
Category:
Alumni
by Ana Gamboa
in 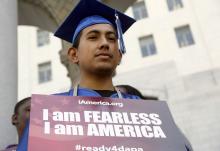 Juntos and the Philadelphia Federation of Teachers (PFT) will be hosting a free DACA clinic for the undocumented community on Sunday Oct 4. Immigration attorneys will be available to review applications and answer questions.

Although he did not gave specific details on how exactly he is identifying the “bad ones” from the “good ones.”

“For now I can only imagine my new life, but I know is going to be different. I am very thankful for all the people that supported me,” said Honduran immigrant Angela Navarro, who after 58 days in sanctuary, won her deportation case on Jan. 14.

I guess Hanks has outdone himself again.

Filmed by Aidan Un, the video campaign is aimed to inform the immigrant community about the end of police compliance with ICE holds. Philadelphia Mayor Michael Nutter signed the executive order back in April, halting the use of warrantless "holds" that allowed ICE agents to check the immigration status of those arrested for a misdemeanor by local police.

Following a collective civil disobedience to call for an end to deportations, 130 immigrants were arrested during the rally. Nine immigrants and clergy from New Sanctuary Movement (NSM) of Philadelphia were among those detained and later held at the Anacostia Detention Center in Washington D.C.

It's all or nothing. Soccer has the power to generate euphoria or the crushing sadness of a long-remembered defeat.

Venezuela SOS is traveling the world, starting in Philadelphia, using music to spread peace and support for students protesting the Venezuelan government's repression.