The mayor of a struggling community in Western Pennsylvania hopes to expand his progressive platform as the state’s lieutenant governor.

In Fairhill, it’s a clear Saturday afternoon in September and El Centro de Oro is bustling. People walk in and out of shops and restaurants as the community prepares to host its annual celebration, Feria del Barrio, the following day. Every now and then, a car drives down Lehigh Avenue blasting music, drowning out the voice of the man who could be named Pennsylvania’s next second-in-command come November.

John Fetterman stands on the corner of N. 5th Street, speaking with several neighborhood residents and leaders about his candidacy for lieutenant governor, a position he is running for as half of the Democratic ticket shared with Gov. Tom Wolf. He’s come to North Philly to join Danilo Burgos, the next representative of Pennsylvania’s 197th District, for a tour of the community, learning about its challenges as well as its successes.

“I’m not here to give answers. I’m here to listen because you know a lot more than I do,” Fetterman told the group. “I’m here as a student, quite frankly, to take in what you have to teach me today.”

Among those present was Joe Garcia, a local activist and deputy chief of Temple University’s police department. He told Fetterman that this community is often brushed aside, considered “the Badlands,” a moniker that creates a negative image for people who exist outside of the area, and resentment among many of those who exist within.

“When you look beyond that, what you discover is the splendor of our community,” Garcia said.

And from Fetterman’s perspective, standing on this corner among the steel sculptures of palm trees, adjacent to businesses in operation and murals decorating the sides of buildings, this neighborhood’s vitality is already clear to him, especially in comparison to the place he calls home.

For nearly 14 years, Fetterman has served as mayor of Braddock, an economically depleted suburb of Pittsburgh. Since the 1920s, the once-thriving steel town has lost 90 percent of its population and today, more than 35 percent of individuals in the predominantly African-American community of about 2,100 people live below the poverty line.

Fetterman, who grew up in York, Pa., first moved to Braddock to start a GED program after earning a master’s degree in public policy from Harvard University. Becoming enveloped in the community and its people, Fetterman saw firsthand the damage that systemic inequality had caused this Western Pennsylvania town.

“We didn’t have anything. Literally,” Fetterman explained. “It was just destroyed.”

Since first running for mayor of Braddock in 2005 — an election he won by one vote — Fetterman’s efforts to revitalize the Rust Belt town have garnered national attention. He has worked to attract business to the area and create opportunities for its residents while also striving to eliminate violence, remembering the dates of homicides in his community since he became mayor by tattooing them on his right arm.

Fetterman’s wife, Gisele Barreto Fetterman, who joined her husband in North Philly on Sept. 22, is a Brazilian immigrant, former Dreamer, and activist. In addition to other philanthropic initiatives in Western Pennsylvania, she founded the Free Store in Braddock, an entirely volunteer-driven organization that receives surplus and donated goods then redistributes them at no cost to neighbors in need. Since its inception in 2012, the concept is now in effect at 10 locations, addressing food insecurity throughout the commonwealth.

A progressive voice in Harrisburg

Fetterman announced in Nov. 2017 that he would seek the Democratic nomination for lieutenant governor of Pennsylvania, aiming to establish a larger platform for the progressive policies he has championed in Braddock, such as addressing income inequality, healthcare expansion, and the reform of marijuana and immigration laws. This election was not his first foray into mainstream politics. In 2016, Fetterman ran for U.S. Senate, losing the Democratic primary but earning nearly 20 percent of the vote as a relatively unknown candidate in a four-way race.

In Pennsylvania, each political party votes separately for governor and lieutenant governor in the primary election, then the winners from each party run as one ticket in the November general election. In May, Fetterman won a plurality (37 percent) of the vote against four other candidates, including incumbent Lt. Gov. Mike Stack and former Philadelphia Deputy Mayor Nina Ahmad, to run alongside Gov. Wolf in November.

On Nov. 6, Wolf and Fetterman face Scott Wagner and Jeff Bartos, the Republican candidates for governor and lieutenant governor, respectively. According to recent polls, Wolf has a double-digit lead over Wagner, a businessman, former Pennsylvania state senator, and staunch supporter of President Donald Trump.

Fetterman’s casual image provides a contrast to Wolf’s straight-laced, suit-and-tie demeanor. The candidate for lieutenant governor is almost always seen wearing a Dickies work shirt and jeans or cargo shorts, regardless of the company he’s in or where he’s going. It’s an unpretentious style that, combined with his policies and a powerful social media presence, has given Fetterman an air of accessibility unique in Pennsylvania politics.

Since announcing his bid for lieutenant governor, Fetterman has campaigned nonstop across Pennsylvania, visiting communities often forgotten or ignored by politicians, from the most rural counties in the commonwealth to urban neighborhoods like Fairhill and Kensington.

A day in North Philly

Danilo Burgos spoke with John Fetterman in El Bohio, a restaurant on the Golden Block. Burgos, who won his district’s Democratic primary in March and is running unopposed in November, expressed his desire to change the status quo in his community—and its reputation—when he takes office in January.

“We need to help people see things in a different light,” Burgos told Fetterman. “We need to give them hope and give them resources and the tools that they need.”

Burgos and the Fettermans, along with other community leaders, had spent the afternoon discussing issues affecting North Philly that they can potentially work together to address, from improving public education and job training, to reducing unemployment and promoting small business, to protecting unions and extending union access to more people of color, to decreasing prison recidivism and providing a pathway for ex-convicts who have learned from their mistakes to contribute meaningfully to society. (As chair of the Board of Pardons, the lieutenant governor plays a crucial role in this regard.)

After visiting businesses in Fairhill, Burgos and Maritza Padua took the Fettermans to some areas of North Philly where the disaster that is the opioid crisis is most visible, including the Conrail tracks separating Fairhill and Kensington, the former site of “El Campamento,” which was one of the largest open-air drug markets on the East Coast. While the encampment has been cleared out, people struggling with addiction still regularly use at the site, as was the case this afternoon, which was part of a weekend that saw a spike in overdoses in the area that left seven people dead and more than 100 sick. 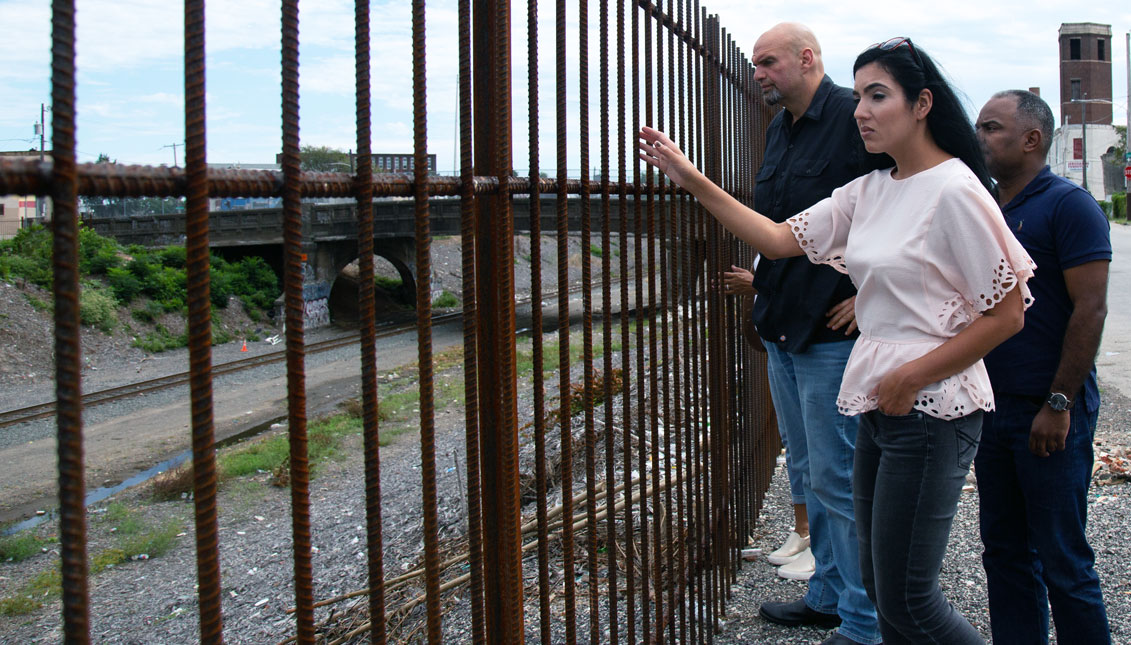 The Fettermans have seen the effects of the epidemic in Braddock, to the extent that the couple has hosted trainings in their home for the use of Narcan, an often life-saving medication used to block the effects of opioids. Despite their familiarity, both were taken aback by what they saw in North Philly that day.

When asked what it means to have leaders at the state level in Pennsylvania who are familiar with this crisis and the people it affects most, Gisele responded:

“The difference is this isn’t something that John and I have read about in books. I carry Narcan in my purse… We live in a community that is going through these challenges,” she said. “It’s personal to us. They’re our neighbors. They’re real people to us, and I think that’s the difference.”

While John Fetterman has advocated for the implementation of comprehensive user engagement sites (CUES), or “safe injection sites,” to address the epidemic in the past, he spoke that afternoon about the importance of listening to community members and their concerns when it comes to considering such ideas.

At the end of his visit, John Fetterman said he was “profoundly grateful” to Burgos and the others for their time, promising to return “again and again” if elected lieutenant governor.

“These are the kind of places and communities and issues that I’ve gravitated to my whole professional career, and this, to me, is why I’m doing this, quite honestly. If I could be the least bit helpful, that’s what I want to do,” Fetterman said.

The previous day, Fetterman had spoken at a rally in Philadelphia for Democratic candidates like Wolf and Sen. Bob Casey, where former President Barack Obama delivered a speech.

“That rally yesterday was great and everything like that, but this is where I want to be,” Fetterman said. “This is what I want to be doing.”