What it is like to go from a citizen to a politician? Kendra Brooks inauguration journey

Councilwoman Kendra Brook's office with the first two objects she placed down: a Maya Angelou calendar and a journal.

What it is like to go from a citizen to a politician? Kendra Brooks inauguration journey

What it is like to go from a citizen to a...

“Tonight, we made history,” said Kendra Brooks on Nov. 5, as she celebrated her win for City Council At-Large representative by 10,000 votes.

Two months later, on Jan. 6, Brooks was taking her oath of office on Inauguration Day as one of four new faces in City Council.

She stood out as the only one, from all 17 members of the council, to run as a third-party candidate, for the Working Families Party.

“It is all very surreal, get back to me later and we will see,” said Kendra Brooks as she entered Office 411, her new chamber, to get ready for Inauguration Day.

It was eight in the morning and just the beginning of a very long day for her. The first task at hand? Getting an ID.

On she went, down to the “G” floor of City Hall.

“Excuse me, is this where you go get your ID?” Brooks asked the guard.

He looked at her for a second. In his eyes you could see he was running through files in his mind, trying to figure out why she seemed so familiar. Then, he cordially gave directions.

As Brooks turned to leave, he exclaimed:

“Hey! It’s you! I knew I knew you from somewhere.”

“Yeah,” she said, nodding her head and laughing. The ID office was steps away.

It was a room divided in two. A desk in front of a table with files and a printer sat on one side and a white chair in front of a blue background on the other.

It is too early for the man at the desk in charge of the process, but he is courteous.

While he prepares the card that will become her ID, Brooks’ communication staff makes sure she looks good. Kendra jokes with them and confesses she had been up since  2:30 in the morning. 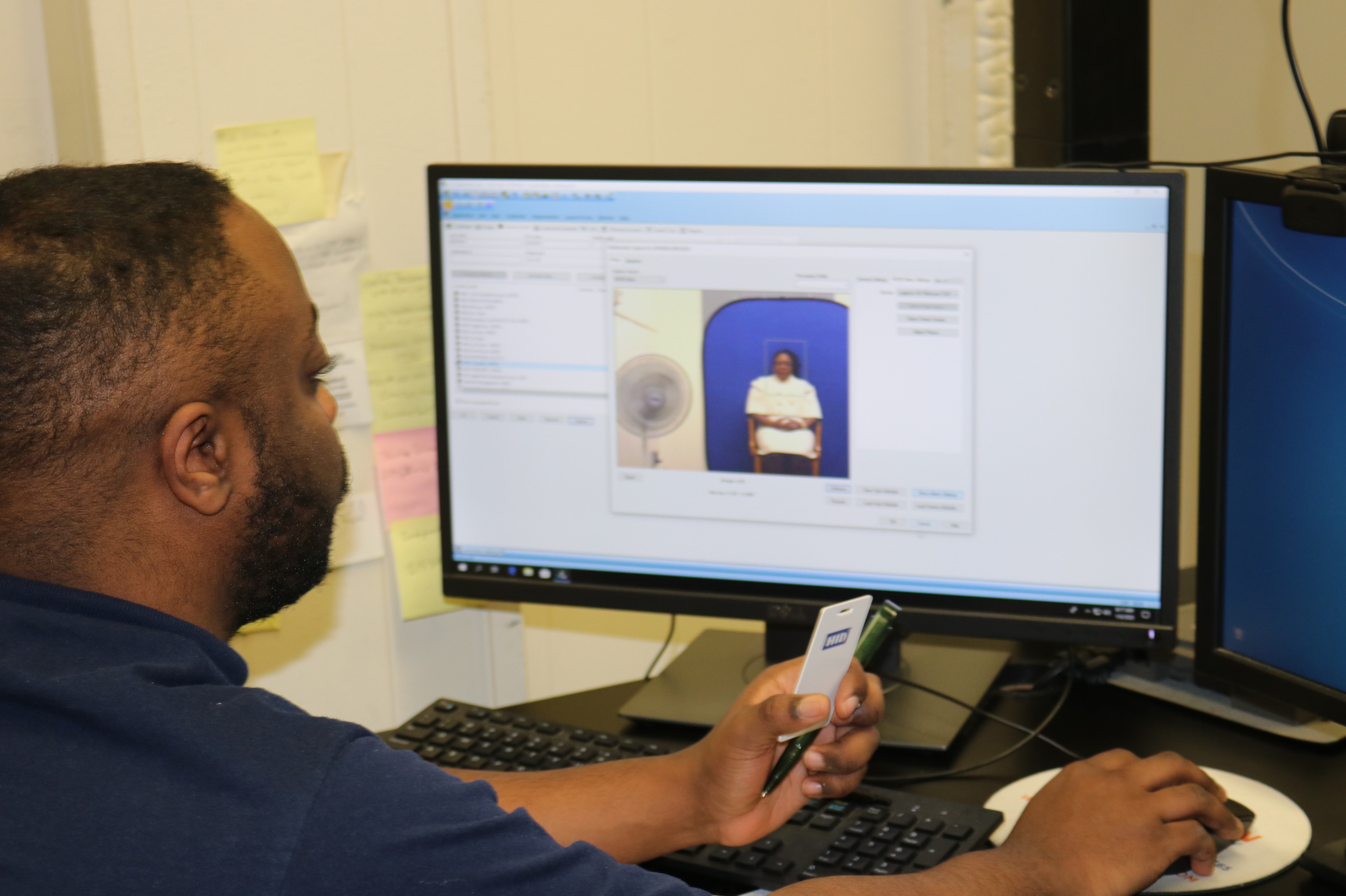 She stands up and walks to the desk to fill out some final paperwork before getting the key to her new workplace for the next four years.

Once received, she clipped the key on her dress and made her way out of City Hall.

“Hey, you made it!” yelled another guard along the way.

“Yeah, just got my credential,” said Brooks as she walked towards Market Street to catch the Broad Street Line. 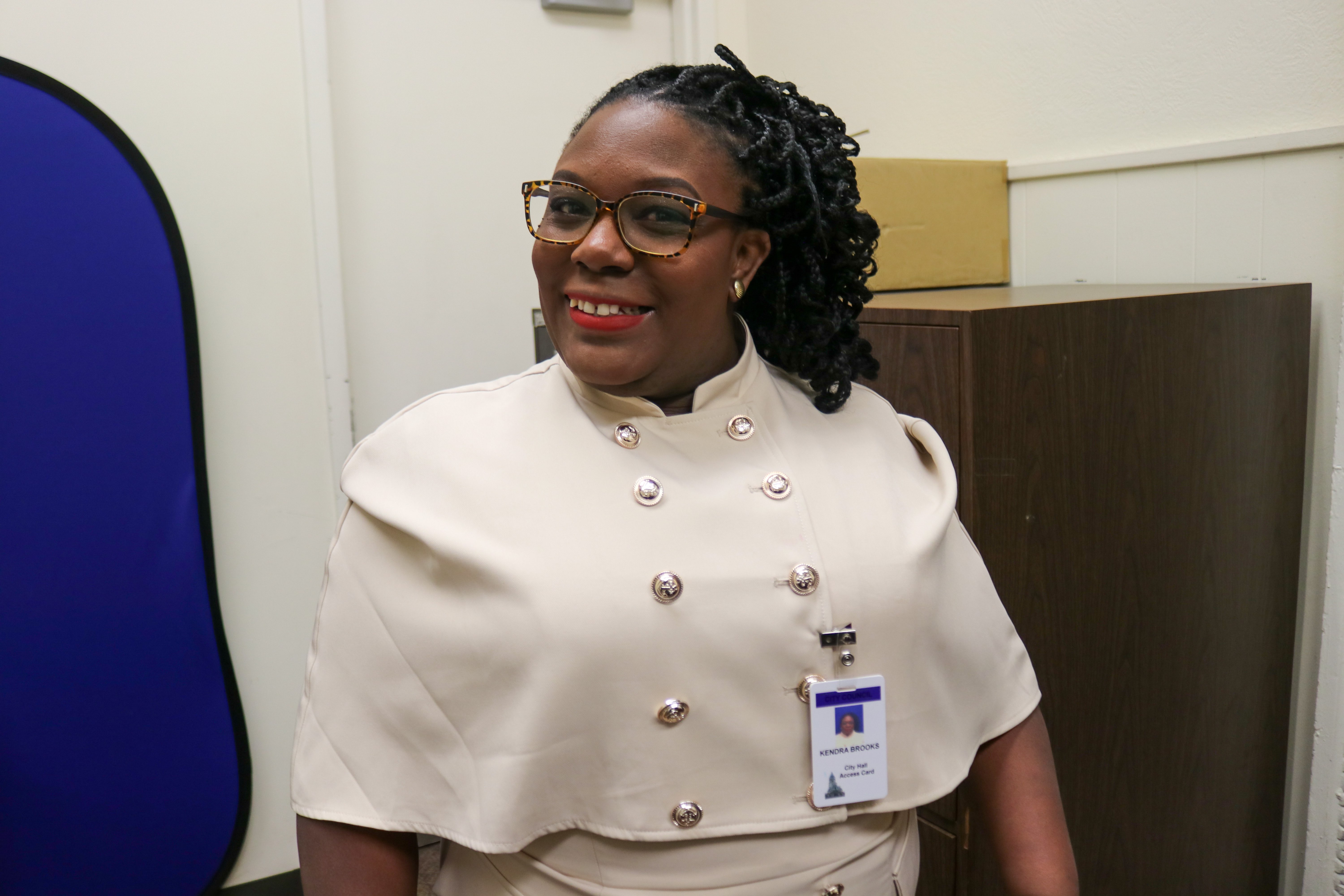 Her next stop that day was north on the orange line, to the MET Philly, where a breakfast was being held for every councilmember (new and old) before the inauguration.

For the next hour, Brooks would converse with her new colleagues as she waited in anticipation for the inauguration.

Meanwhile, the councilmembers family and friends along with other guests were filling the tri-level theater.

A sparkling chandelier made for an impressive display, a white and gold, builtin arch framed both sides of the stage and red and white roses decorated the floor.

The 17 desks assigned to each member of City Council, for the next term, were the centerpieces of the stage.

In the front was a podium for the speaker. To the left were seats for the priests and rabbis performing prayers during the ceremony alongside the Mayor, in charge of officiating the ceremony.

As people came and went off the stage, awaiting the program to begin, Brooks entered the scene, spotting her friend and supporter Councilwoman Helen Gym. 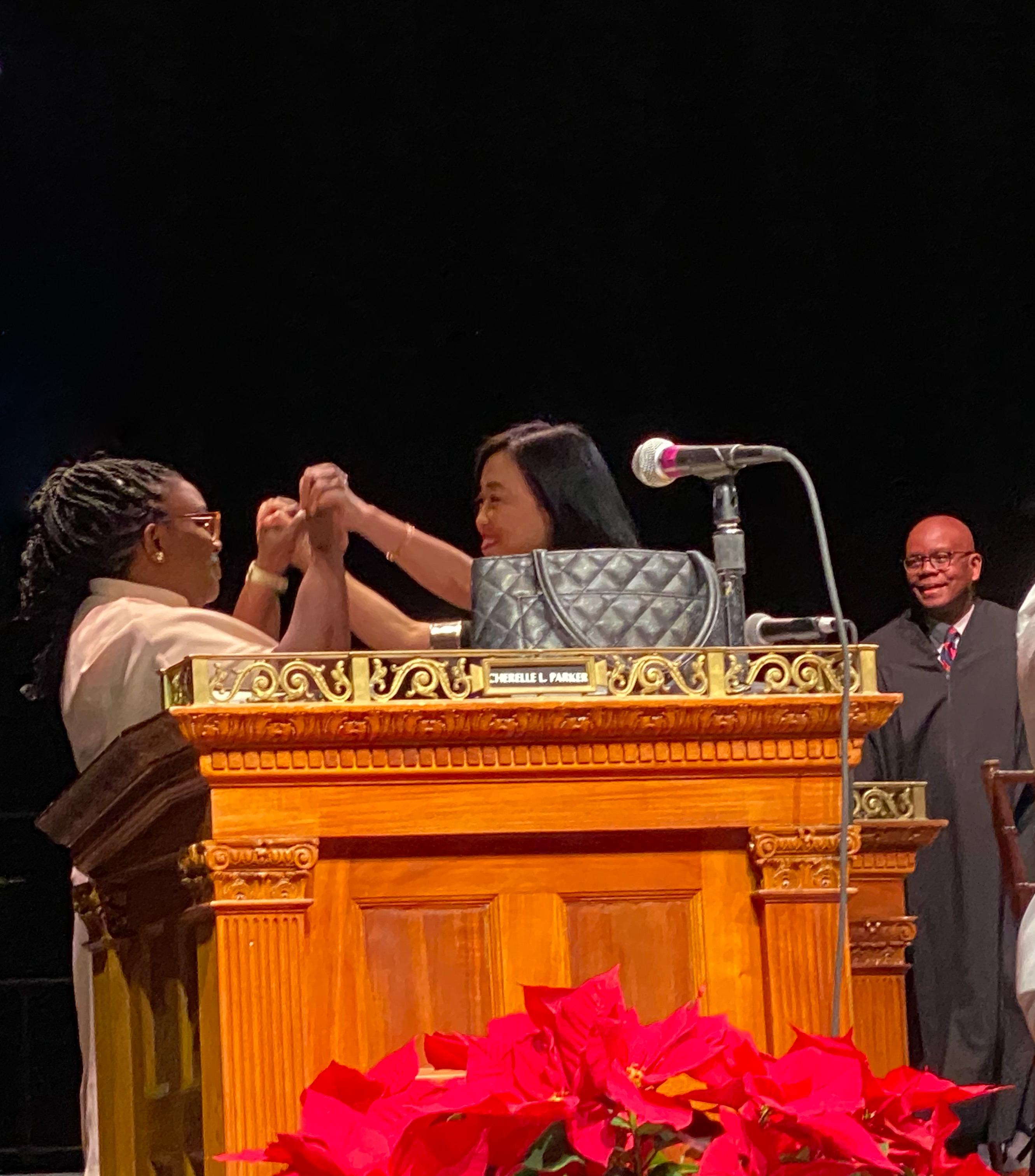 They look at each other for a brief second and laugh. Without saying a word they hold each other hands up in the air and smile. After a brief conversation, both part ways

It’s Sheila Armstrong from the Working Families Party and one of Brooks’ campaign field directors capturing the moment.

Her excitement was understandable, but even amidst feeling on cloud nine, Armstrong wanted Brooks’ to remember to always keep herself grounded.

“When somebody gets into positions like this, they end up becoming more like the others, than staying true to themselves, so stay close to your roots and keep fighting for the people. Stay truth, keep god first, this is all about the people,” she said

As the theater started to fill up, Armstrong was able to locate Brooks’ mom before the ceremony started.

“I’m so proud of her. I knew she was going places, I just didn’t know where. But now we know. The sky's the limit,” said her teary-eyed mother.

As the ceremony started, Councilwoman Cherelle Parker took the stage to introduce every member of the new City Council.

Brooks’ name was first to a roaring applause.

A little after 10, it was time for the new councilmembers to take their oath. Brooks’ mom was next to her as she put her hand on the bible and was officially sworn into office.

“You did it, Kendra, you did it!” members of the crowd shouted.
“Councilwoman I see you brought the party from your victory party,” said Council President Darrell Clarke during his speech.

The 194th Inauguration Ceremony went on for another two hours, and then all the council members went back to City Hall to celebrate among family, friends, and guests.

Between the crowd, a line coming out of room 408 (Brooks’ staff office) stood out. It seemed a never-ending thread of 10 to 15 people, constantly refreshed by a new person waiting to meet the new councilwoman. 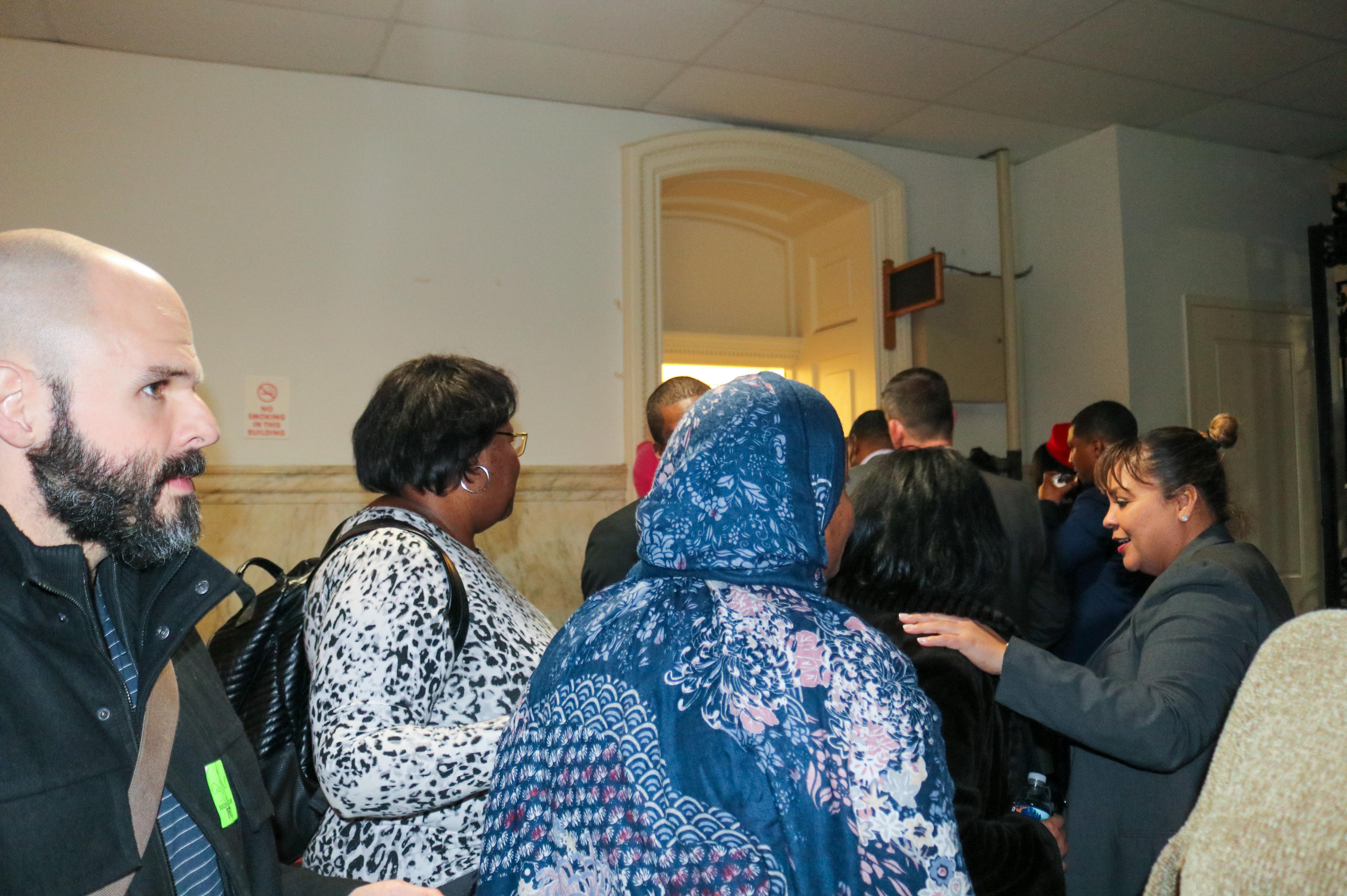 Inside, Brooks tried her best to talk to everyone as more and more people came to congratulate or talk to her.

Close to 200 people came to her celebration, including her family, friends, and campaign workers.

Even some of her new colleagues who came to visit had to wait their turn.

Councilwoman Maria Quiñones-Sánchez tried to congratulate her and stood in line for a couple of minutes. As time went by, she gave up.

“We will see her later,” she said.

Brooks’ grandkids and nieces played along in her chamber, while her mom, and sisters talked. 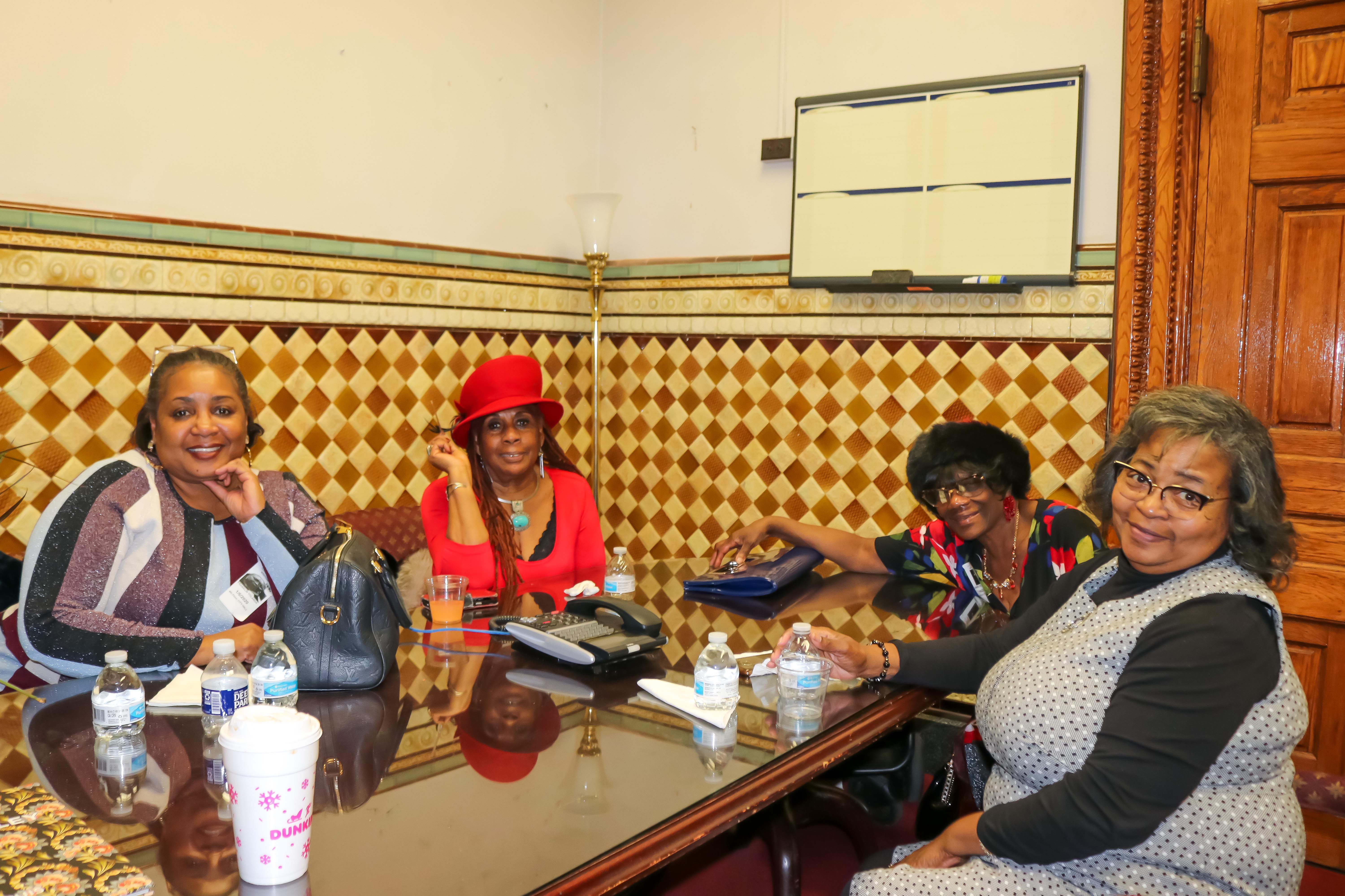 “I am so excited to see her here. She worked very hard for this,” said her sister, Karla Brooks.

For Karla, the whole experience is still “surreal.”

“It's like is this real? Am I walking through City Hall, going to my sister's office and just being among the council members?” she said.

“We just want her to stay true to her roots,” added Brooks’ sister Nikia Brooks.

To help her keep that base both were sure to remind their sister of their undying support.

“We got your back no matter what. You see her, you are gonna see us,” they said.

For over an hour and a half, Brooks stayed in her staff office and talked to every soul that came through the doors. Before she knew it, the clock struck 3 p.m. 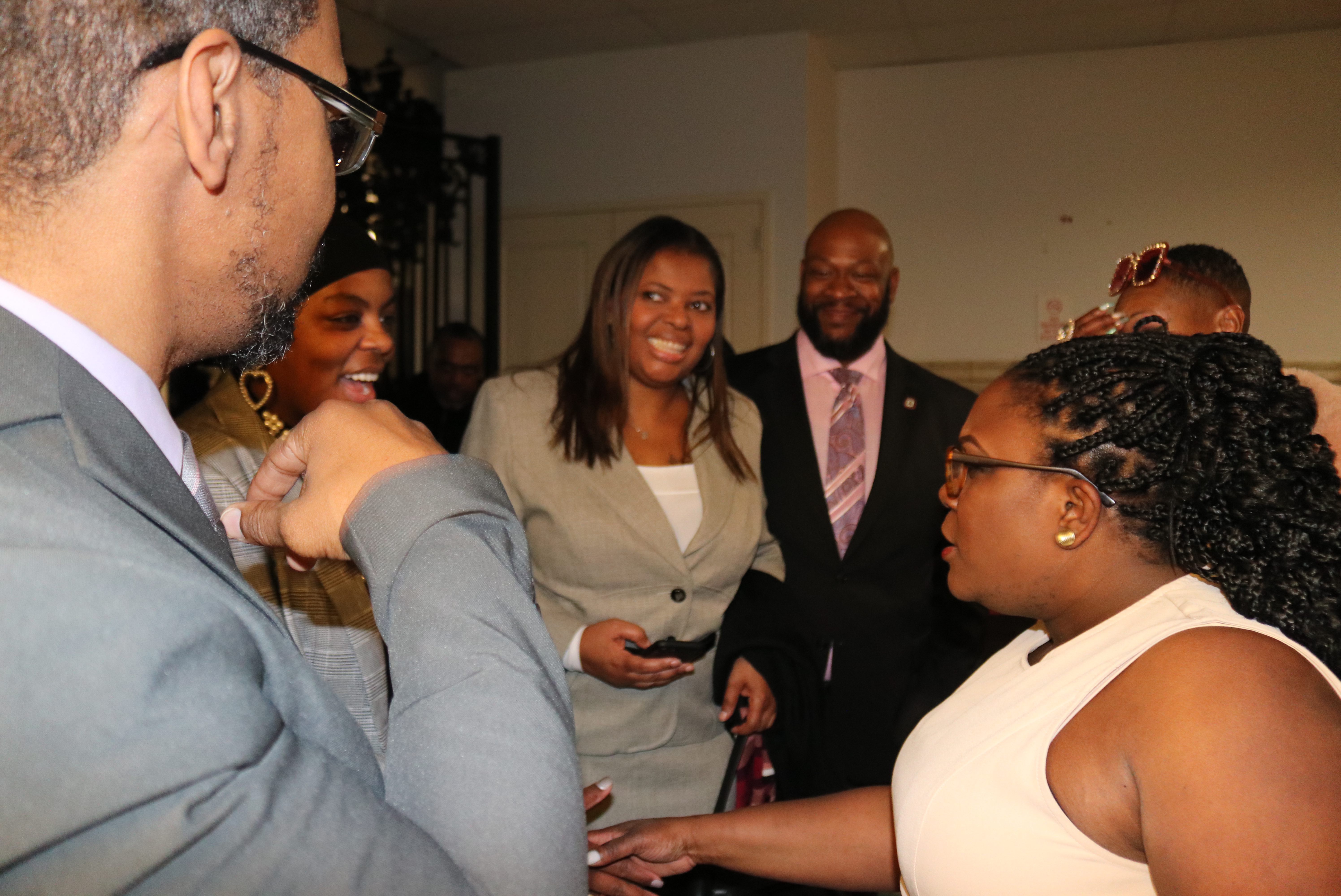 When asked how she felt at this juncture, the answer was emotional.

“If I am being honest, there’s been a couple of times where I feel like I wanted to cry. It’s overwhelming at times,” said Brooks.

Before she could continue, another wave of visitors entered.

Just then, a little girl in a gray dress popped up. It was one of Brooks’ twin granddaughters, followed by Kendra’s oldest daughter, Kashmere. 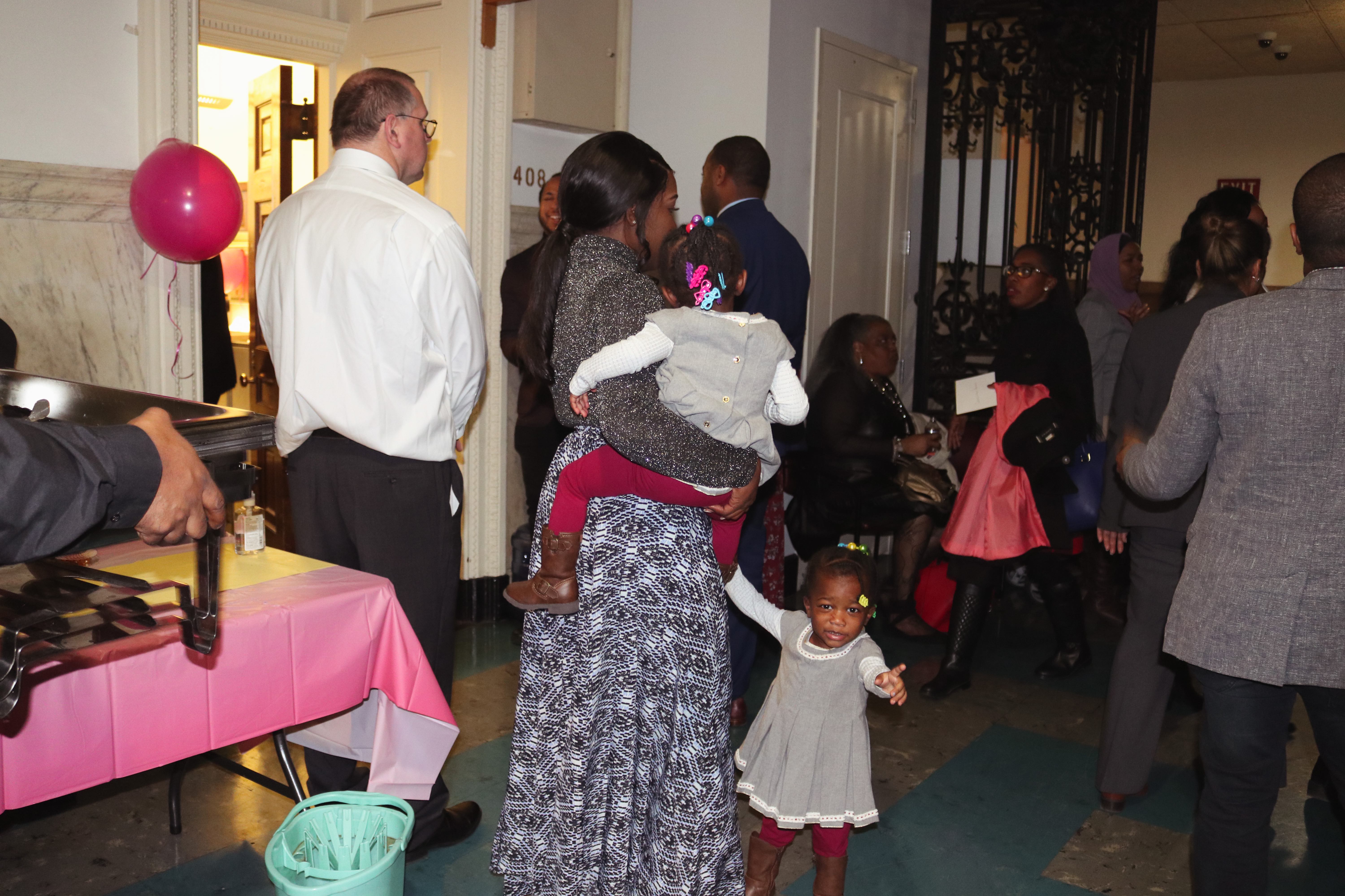 It amazed her how just the day before, the office and halls were empty as she helped her mom clean up her new chamber.

“It's been such a frenzy trying to get her foot in the door,” she recalled. “It’s time for her to settle.”

“I am super proud of you mom. You have always been my person to measure myself up to. But with this, I'm like, man what can I do to measure that?” said Kashmere.

In the middle of the conversation, one of the attendees said:

“When I say Kendra, you say Brooks” and the entire corridor started chanting her name.

It wasn’t until 3:35 that Brooks took a little break, it seemed like everyone who wanted to talk or congratulate her had finished.

She was finally ready to enjoy the food and company.

Twenty minutes later, she was ready to congratulate her colleagues on the 5th floor.

When she got there, she found her daughters and nieces already dancing in the hall. Somebody had mentioned “the fifth floor is popping” and they made their way up.

She caught a break to enjoy herself and dance with her family before handing out her own congratulations. 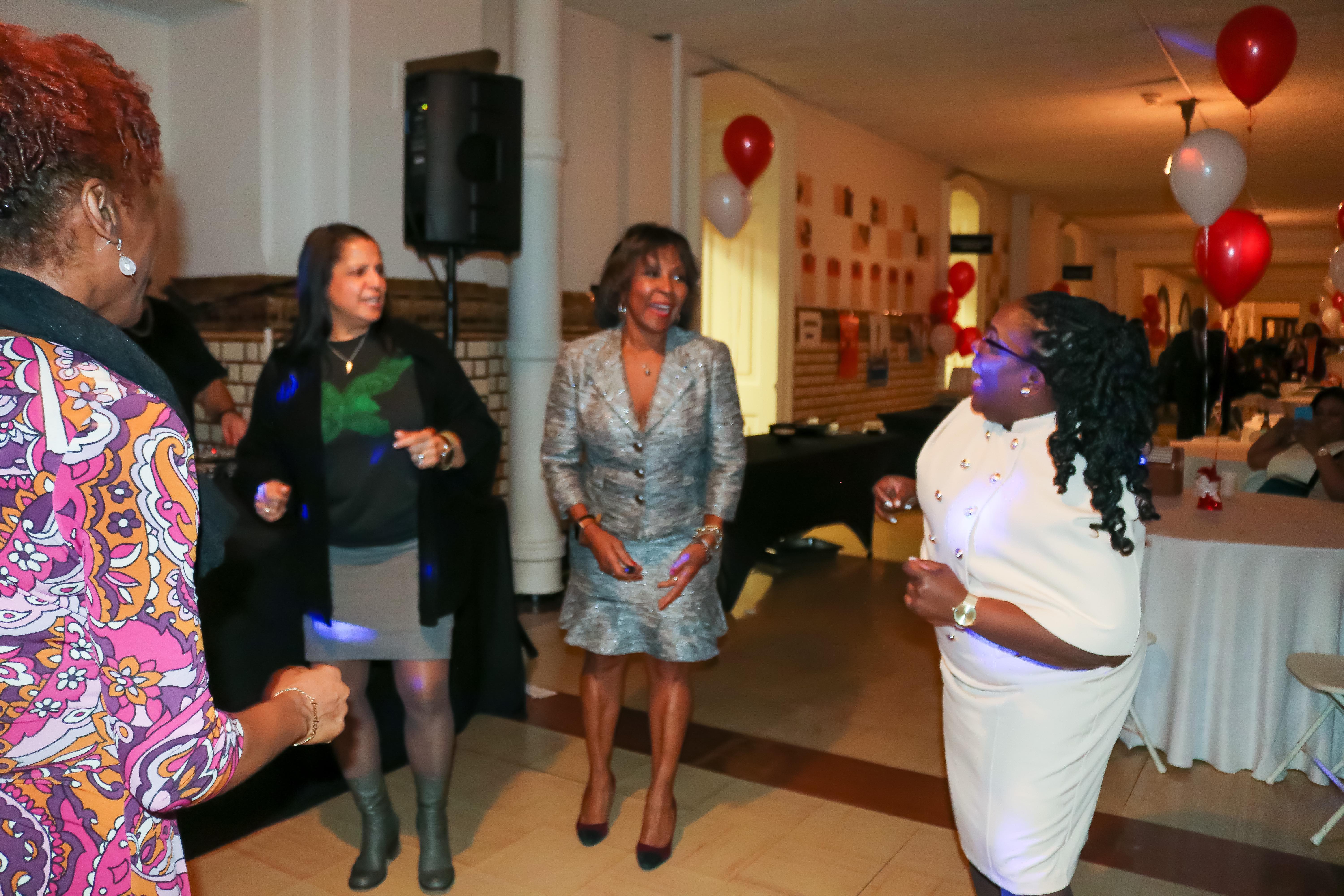 They hug, laugh, congratulate each other and take pictures with their families, as Kendra said goodbye to Kashmir and the twins.

Councilwoman Helen Gym was the next one in order.

They hug each other like old friends who have been thrown a lot, like saying ‘I got you’. After ten minutes, Brooks left, after all, she was not done congratulating peers.

Her next stop was Councilwoman Quiñones-Sánchez’s office. 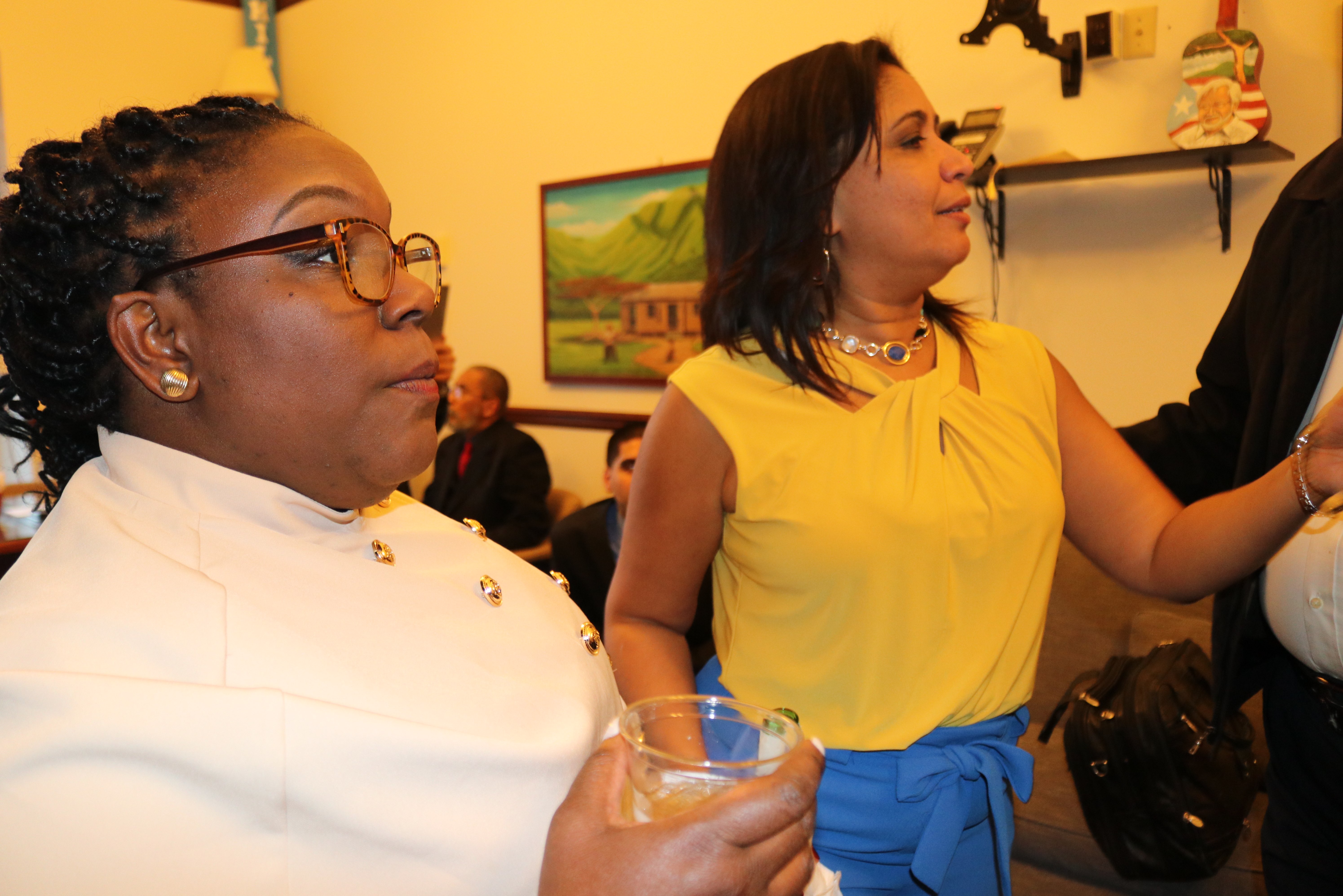 “Welcome to work, lady,” said Quiñones-Sánchez with a laugh.

“What’s the first thing you plan to do with your family after things settle down?” she asked Brooks.

“Cook them a homemade meal. They haven’t had a decent meal in a year because of the campaign, said Brooks. “I’m hoping once I figure everything out, I will be able to get them back on a schedule.”

Later, she returned to the 4th floor, where once again people waited to talk to her.

In the middle of one of these talks, she stopped suddenly, her eyes fixed on the entrance to her office.

“I’m sorry,” Brooks said. “I didn’t realize, my name is on the top of the office now,” she said with frisson-like eyes. 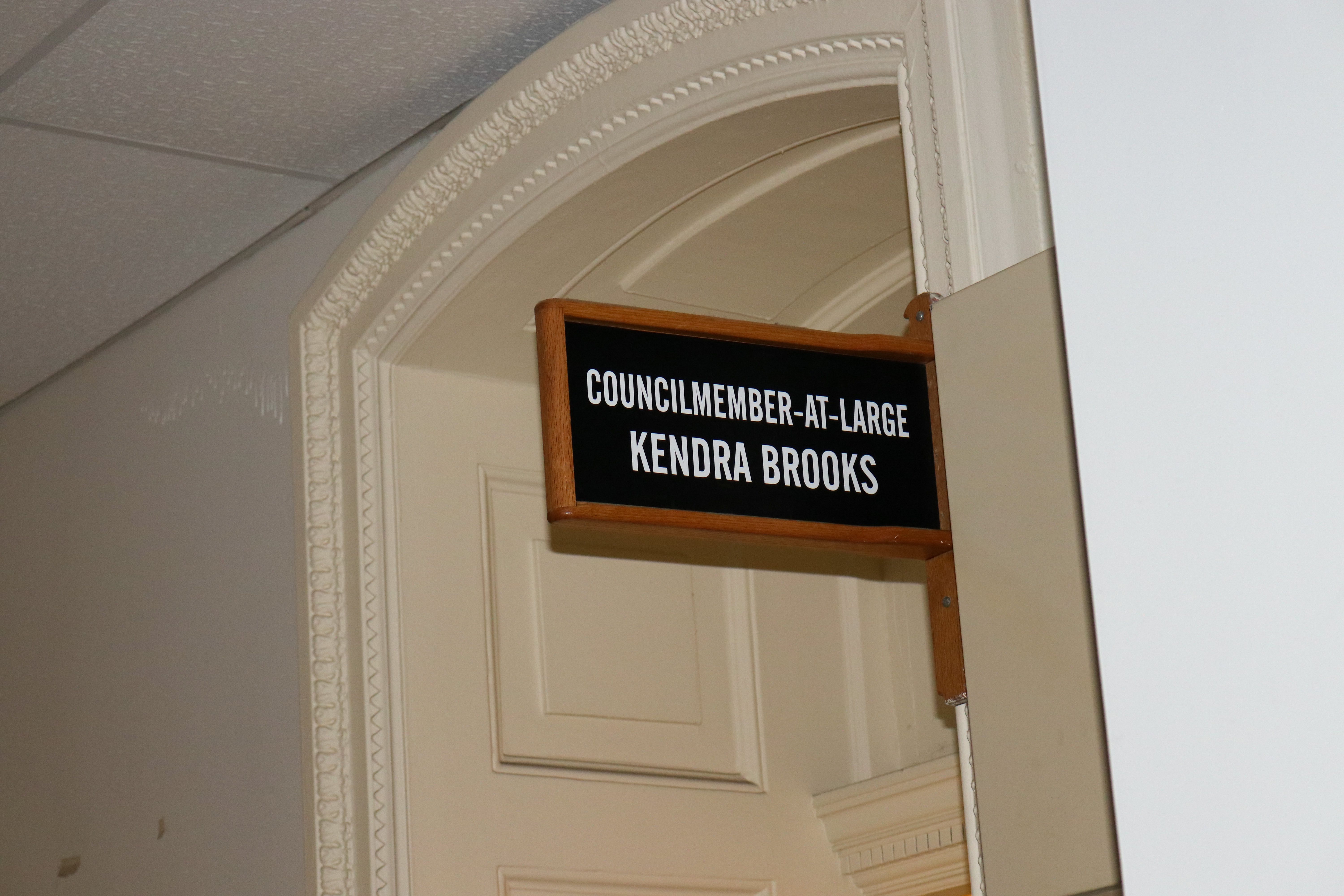 She snapped out of the moment in a split second and brought herself back to the conversation.

After almost three hours of standing and moving around, Brooks was finally able to take a seat.

“It still feels very surreal,” said Brooks. “All I can think about is that they need me to get to work. I’m really excited about that.”

There was a pause.

“I am a stranger to politics, I don't understand [the concept of not letting everyone approach her and talk] and I'm glad I don't because that can continue to be the thing that makes me me,” she said.

For the next four years, Kendra Brooks will occupy Office 411 as Councilmember At-Large. During this time she will track her activities on a Maya Angelou calendar and document her days at City Hall in a journal.

“For me, everything I do here is gonna be different because I have never done it before and I'm excited to make people excited about the change I can bring,” said Brooks.