Is Trump really willing to grant citizenship to Dreamers?

US President Donald J. Trump speaks during a meeting with US mayors in the East Room of the White House, in Washington (USA), on Wednesday, January 24, 2018. EFE / MICHAEL REYNOLDS

In another radical change of mind, President Trump hovered the possibility of finally granting citizenship to the DACA recipients, in a period of 10 to 12 years.

Yes or no? That is the question we all ask about President Trump's willingness to reach an agreement that alleviates the immigration status of more than 800,000 undocumented youth who arrived in the country when they were children.

On Wednesday, Trump seemed more condescending when it came to finding a way to grant citizenship to the so-called Dreamers, as long as legislators approve a budget of 25 billion dollars for his wall on the border with Mexico, as reported Roll Call.

In statements to a group of reporters who were in the White House, Trump said "we are going to morph into it. It's going to happen,” according to CNBC. “At some point in the future, over a period of 10 to 12 years.”

While Trump had referred to DACA as a "sensitive issue" before, this is the first time he explicitly says that he is open to the possibility of a path to citizenship for these young people.

"If they do a great job, I think it’s a nice thing to have the incentive of, after a period of years, being able to become a citizen," the president continued.

But these comments do not clear the uncertainty of the matter.

After celebrating his anniversary in the post with a government shutdown caused by his inability to reconcile with the bipartisan Senate, the president again uses his television rhetoric to keep the issue at stake, without solving anything along the way.

One of the authors of the bipartisan proposal rejected by the president, Senator Lindsey Graham (RS.C.) turned to Twitter to flatter Trump's disposition in the matter, assuring that "it represents presidential leadership on immigration that will allow us to solve a difficult problem." 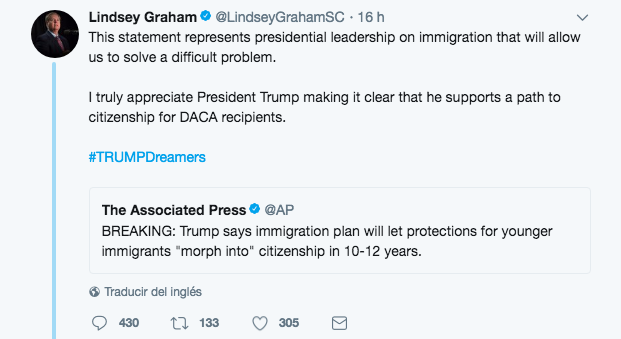 Also, the president said he could give Congress more time to pass legislation that protects Dreamers, if a solution is not reached before the deadline (March 5). "I certainly have the right to that, if I want."

The problem is precisely that: if he wants.

During her press conference on Wednesday, Sanders said the president "will unveil a legislative framework on Monday for a compromise on the DACA issue," Shareblue reported.

Before the reporters' questions about details in the matter, Sanders replied: "Well, if I tell you now, I would kind of take away the fun for Monday."

For the administration, then, the anguish in which hundreds of thousands of immigrants are immersed at this moment is only a preamble to the next act of the show, which depends intrinsically on the mood and disposition that the President has around the time he comes back from his trip to Switzerland.

To get AL DÍA Print Edition at the comfort of your home, please click here
TAGS
Trump
daca
dreamers