The outlook in Venezuela changes radically in 48 hours

The outbreak of violence along Venezuela's borders with Colombia and Brazil following attempts to bring humanitarian aid to the country has influenced support in the international community for interim president Juan Guaidó, who announced a new framework of decisions in which "all options are on the table."

The outlook in Venezuela changes radically in...

"The future of Venezuela is now counted in hours," journalist César Miguel Rondón posted on Twitter - the only means of communication Venezuelans have been able to use over the last few hours.

On Saturday, the Venezuelan National Assembly, in coordination with governments in Colombia, Chile and Paraguay, and under the direction of interim president Juan Guaidó, traveled to the country's borders with Colombia and Brazil to collect the tons of international humanitarian aid that had arrived, which included products of pressing need in the country. 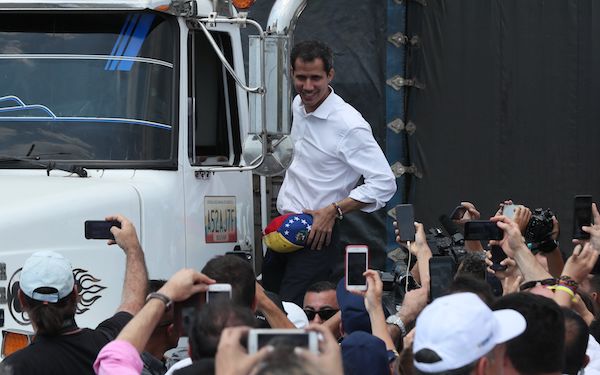 Venezuela's interim president Juan Guaidó greets this Saturday from a truck, in Cúcuta (Colombia). Guaidó called on Saturday to the Armed Forces to stay on "right side of history" and allow the entry of the 14 trucks that departed from Cucutá with 280 tons of humanitarian aid. Photo: EFE/Mauricio Dueñas Castañeda.

After a weeks-long campaign, and following the international community's discrediting of Nicolás Maduro’s administration, opposition politicians and volunteers throughout the country mobilized to challenge the Chavista regime along the borders, as they attempted to gather medicine and food supplies for the country's neediest.

Living in the country with the highest inflation in the world, the Venezuelan people don’t have access to food or medicine at the moment. Since 2015, more than three million Venezuelans have left the country in search of means to survive.

Even so, Maduro ordered the Armed Forces to block the points of entry into the country, and to shut down any attempts by aid trucks to enter, asserting that it was nothing more than American "intervention,” and denying the existence of a humanitarian crisis in the country.

The confrontation along the border led to four deaths and more than 285 injured, as well as 160 soldiers who lowered their weapons and crossed the border to join President Guaidó and his supporters, who make up the majority of the country.

Some of the deserting soldiers said that the order was to "massacre the people," and that the regime had given the green light to paramilitary groups to open fire on volunteers working at the borders.

Several media outlets also reported that one of the Chavez leaders, Iris Varela, had uniformed and armed more than three thousand prisoners in national jails, who would be deployed to "defend the homeland."

On the border with Brazil, government forces opened fire on local citizens and the area's indigenous community, who were supporting the humanitarian aid efforts.

The local Pemon tribe was intimidated and persecuted throughout the day, and by Sunday the area was placed under a curfew.

In the face of tear gas and bullets, the opposition officials and volunteers only managed to get two humanitarian aid trucks into the country. Maduro's military forces also opted to burn one of the trucks, preventing the rest from getting in.

While his forces massacred the people, Nicolás Maduro literally danced salsa in the capital, from where he denounced a U.S. military intervention and told President Trump "Hands Off Venezuela.”

Maduro dances on national TV as national guards fire tear gas and plastic pellets at crowds trying to move humanitarian aid into the country along the Colombian border pic.twitter.com/4u4zEHDixi

The strategy employed by Guaidó and his internal advisors was, up to this point, to exert diplomatic pressure in accordance with other governments in the region, in anticipation of the majority of the Venezuelan armed forces opting to recognize him, and collaborate with what they have called "the cease of the usurpation."

However, Maduro's violent response on Saturday may call for a change in approach, one which could include the use of force.

"Today’s events force me to make a decision: to formally propose to the international community that we must have all options open to achieve the liberation of this country," Guaidó wrote after the violent events on Saturday.

Having been recognized by most international governments, the Guaidó announced that he would meet Monday in Bogota with the Lima Group, a coalition of countries in the region that have insisted on the end of the Maduro dictatorship, and have sought solutions for the Venezuelan crisis that has overflowed into other countries in the region.

As a security measure, Colombian President Ivan Duque announced that demonstrators and law enforcement agencies would not be allowed to approach the border with Venezuela. The Brazilian government has taken similar measures, in the run-up to Monday's meeting new action route.

To get AL DÍA Print Edition at the comfort of your home, please click here
TAGS
venezuela
Guaidó
Maduro

Everything you should know about Catatumbo's lethal lightning

Venezuela in the gloom

Jorge Ramos on Maduro: ‘He didn’t like the questions we were asking’