President Trump made a mistake in choosing his words on Twitter and seems to have unwittingly confessed an obstruction of justice.

A Twitter account in the hands of a president with sensitive thumbs is a danger ... to himself.

After the former presidential campaign aide and national security adviser for 25 days in Trump's cabinet, Michael Flynn, pleaded guilty to lying to the FBI last Friday, the hiss of this pressure cooker goes only higher.

Flynn confessed to giving false statements to FBI agents during its investigation into Russian interference in the 2016 presidential election, especially about his conversations with the Russian ambassador to the United States, Sergey I. Kislyak, thus increasing suspicion of collusion between Moscow and the Trump campaign to take over the White House.

While the president is still outside the radar of special counsel Robert Mueller - who has taken over the investigation of the so-called Russiagate, after Trump fired the FBI director, James Comey - Fynn's adhesion to lawyers in the role as a collaborator and his total distancing from the president and his advisers, could change the scenario outright.

To get rid of any bad presumptions, the president wrote on Twitter "I had to fire General Flynn because he lied to the vice president and the FBI. He has pled guilty to those lies. It is a shame because his actions during the transition were lawful. There was nothing to hide!" 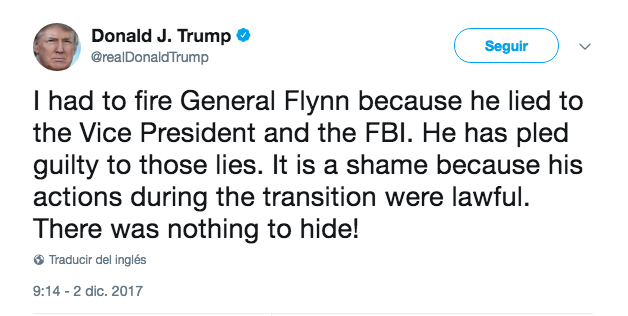 Well, we agree on something: there is nothing to hide. With that message, the president would be making it clear that he knew that Flynn had committed a crime (which carries up to 5 years in prison) and yet, he pressured the then director of the FBI, James Comey, to let this (Flynn) go.

In this, several analysts agree, according to The Guardian. Richard Painter, a former ethics advisor to the Bush administration, said the president "could be tweeting himself into an obstruction of justice conviction”.

For his part, Laurence Tribe, professor of constitutional law at Harvard University, said that this is "a confession of deliberate, corrupt obstruction of justice."

The irremediable question is: if there is nothing to hide, why did Fynn have to lie to the FBI?

To overshadow the emergence of this and other questions, the president's personal lawyer, Jon Dowd, told CNN on Sunday that the tweet was his own and that it was a "paraphrase" of the statements of the White House Special Advisor Ty Cobb, who made a statement on Friday.

Despite warnings from the former acting Attorney General, Sally Yates, and from former President Obama himself, the Trump campaign actively brought Michael Flynn into its cabinet, and subsequently tried to get rid of the dead load.

Still, the president continues to defend his former aid by declaring to the media on Monday that he feels "very badly" for Flynn, and directing the blame to the FBI: "Clinton lied many times to the FBI, nothing happened to her. Flynn lies and they destroyed his life. I think it's a shame," Trump said on the White House South Lawn, as NBC reported.

And as if it were an orchestrated collaboration, the Kremlin issued a statement on Monday assuring that there was no persuasion on the part of Flynn for Russian President Vladimir Putin not to take retaliation against the sanctions imposed by former US President Barack Obama.

According to the Foreign Minister of Moscow, Dmitry Peskov, these accusations are "completely absurd".

To get AL DÍA Print Edition at the comfort of your home, please click here
TAGS
Trump
#Flynn
Comey