Over the weekend, a new chemical attack in a suburb of the Syrian capital has challenged the US government, after President Trump announced days ago that he planned to withdraw troops from the Arab country.

Last weekend, the Syrian people experienced another fatal episode when, after a brief ceasefire, the city of Douma (Ghouta del Este), "was again subjected to heavy shelling that resulted in dozens of casualties and hundreds of injuries, "reported the Syrian-American Medical Society (SAMS).

The attack was carried out on Saturday, April 7 at 7:45 pm over residential neighborhoods in the city of Douma, whose inhabitants - mostly women and children - were transferred to local assistance centers "with symptoms indicative of exposure to a chemical agent," explained the SAMS press release.

The symptoms are inescapable: it was a new bombardment with chemical weapons.

The last time the international community had massively reported a chemical attack had been during the month of April 2017, when the government of Bashar Al-Assad deployed a chemical bombardment on the city of Kahn Sheikun, then dominated by the rebels and who lost more than 80 civilians.

At that time, the newly invested President Trump authorized the launch of 59 cruise missiles called Tomahawk from the warships USS Ross and Porter located in the eastern Mediterranean.

While US missiles were headed to an air base allegedly used by Syrian and Russian forces near the city of Homs to launch the attack, the damage was not severe, the Guardian reported at the time.

After a chaotic first year in office, President Trump announced just two weeks ago, and during a rally in Ohio, that "we’ll be coming out of Syria very soon. Let other people take care of that now! "

As the Washington Post recalls, "the next day, news broke that Trump had suspended more than $200 million in stabilization funds for the recovery efforts in Syria."

And as if it were a matter of cause and effect, the announcement of the US president was sufficient for the regime of Bashar Al Assad to attack again its population with brutal force.

While Trump denounced the attack on Twitter - skimming Russia for the first time with one of his offensives -, for some the US president would share some guilt.

Many dead, including women and children, in mindless CHEMICAL attack in Syria. Area of atrocity is in lockdown and encircled by Syrian Army, making it completely inaccessible to outside world. President Putin, Russia and Iran are responsible for backing Animal Assad. Big price...

In a statement, McCain denounced that "Trump last week signaled to the world that the United States would prematurely withdraw from Syria. Assad and his Russian and Iranian backers have heard him and, emboldened by American inaction, Assad has reportedly launched another chemical attack. "

However, as USA Today explained, this would be "the eighth chemical attack since Trump took office," citing the records of the Independent International Commission of Inquiry in the Syrian Arab Republic at the United Nations. 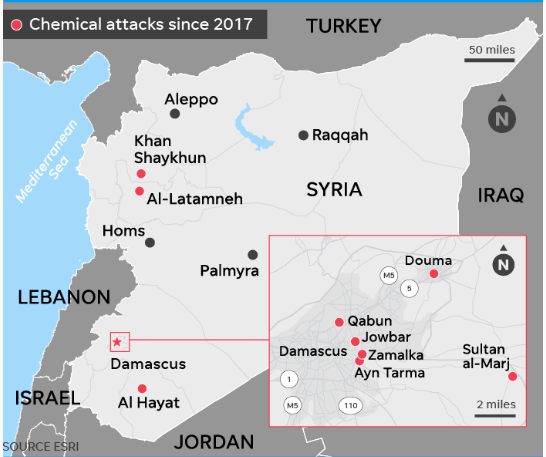 But it was this latest attack that put the United States back on the game board, after President Trump announced Monday that "quick actions" would be taken in response to Saturday's "barbaric" chemical attack, saying that " all options, including military action, were on the table," Reuters reported.

At a meeting of his cabinet, Trump said talks with military advisers would be underway to make a decision in less than 48 hours.

"It was an atrocious attack. It was horrible," he said. "We are very concerned when something like that can happen. This is about humanity. We’re talking about humanity. It can’t be allowed to happen."

To get AL DÍA Print Edition at the comfort of your home, please click here
TAGS
attack
Chemical Attack
syria

The Bidens come to Philabundance for MLK Day of Service

The future of the Syrian war

Trump and Syria: In or Out?

The bloody U.S. involvement in Syria: What you didn't know

How Trump keeps paying allegiance to Putin, even in Syria