Marijuana in the United States: Brief history of legalizatIon

The debate around marijuana is increasingly inclined towards its national legalization. (Photo: Getty)

For centuries, the U.S. has had a complicated relationship with marijuana. Should the federal government finally decriminalize its use?

More than 40 years after the criminalization of cannabis use, the debate about health effects, the economic impact, and the regularization of marijuana are increasingly inclined toward legalization.

According to an article published by the New York Times, and although "nearly three quarters" of the states in the country have introduced some type of decriminalization, "the social costs of the marijuana laws are vast."

In 2012 alone, and according to figures published by the FBI, "there were 658,000 arrests for marijuana possession, compared with 256,000 for cocaine, heroin and their derivatives. Even worse, the result is racist, falling disproportionately on young black men, ruining their lives and creating new generations of career criminals."

However, the debate remains in the margins of the legislative autonomy of each state. Oklahoma, for example, approved the use of medical marijuana on June 26, "becoming the thirtieth state to do so," according to the Washington Post.

From colonial product to poison

The history of marijuana in American culture dates from the 17th Century with the production of hemp in the Jamestown colonies, passing through its transformation into a fundamental product for the economic stability of the United States in the matter of textiles and construction materials.

It was during the second half of the 19th century that William O'Shaughnessy introduced the use of medicinal cannabis in the West.

With the regulation of drugs and the consequent adulteration of cannabis products with narcotics, their condition became that of "poison" within American culture.

From then on, a series of restrictive laws, born in New York at the beginning of the 20th century, were enacted in an attempt to control marijuana consumption, triggered by the passing of the Pure Food and Drug Act in 1906.

The criminalization of its use spread throughout the country during the following five years under the classification of "habit-forming drugs," fighting against what was considered an "addiction."

In 1925, the United States joined the international cause of regulation of hashish from India but allowed the use of hemp for textile products.

Since 1930, the federal government has dedicated efforts to the regulation of "recreational drugs," creating the Federal Bureau of Narcotics, signing international agreements against trafficking, and introducing a tax on marijuana, making its use or distribution illegal throughout the nation.

Since the 1970s, the government institutionalized the work of prevention and control of the consumption of any derivative of cannabis and also included measures against the use of heroin, LSD, and peyote.

During the government of President Richard Nixon, all agencies created from the Bureau of Narcotics were merged into a single office that has been known since as the Drug Enforcement Administration (DEA), charged with prosecuting and penalizing the use, possession and/or the trafficking of any substance considered "addictive" or dangerous to health.

A distinction between "medicinal" and "recreational"

During the 1990s, and thanks to discoveries of effective treatments against some diseases, the state of California introduced the so-called Proposal 215 for the legalization of medicinal cannabis, an example that was followed by several states.

Despite the scientific documentation, the House of Representatives opposed its legalization during the following years, urging the persecution and prosecution of those who cultivated and distributed medical marijuana, even if the traffic was done outside the state limits.

While the federal government has strongly opposed the legalization of cannabis use - even in the case of controlled doses against diseases such as glaucoma - there are cases dating back to the 1970s, when the government could not avoid the emergence of groups such as the Compassionate Investigational New Drug program in 1978.

State autonomy allowed each state to pass legislation, regulating or permitting according to their interests, with New Mexico being the first state to approve some type of proposal that would allow the use of medical marijuana.

But bureaucratic obstacles have not allowed total decriminalization and national regulation of cannabis-derived products for the treatment of diseases such as Parkinson's or cancer.

During the 1980s, local governments in states such as Pennsylvania and California insisted on the reclassification of marijuana based on studies that determined the true scope of consumption.

In 1973, Oregon attempted to decriminalize the product, reducing penalties for possession, and was followed by Alaska, Maine, Colorado, California, and Ohio.

However, political bipartisanship allowed the reinstatement of penalties and the debate remained in place until the beginning of the 21st century.

In 2001, several states started the second wave of decriminalization, beginning with Nevada, Massachusetts, Connecticut, and Missouri.

Ten years later, Colorado and Washington became the first states to legalize the recreational use of cannabis, establishing control measures similar to those of alcohol (being over 21 years old, DUI control) and allowing personal cultivation.

Between 2013 and 2014, six more states legalized its use, as well as Indian reservations.

Some specialists suggest that the phenomenon of the decriminalization and legalization of marijuana is a product of the "policy diffusion," where adjoining territories adopt similar measures for the effect of model reproduction.

After Canada legalized marijuana nationwide on June 19, many anticipate a broader change in U.S. national policies.

According to the Washington Post, the first changes could be seen in the positions of the federal government, especially at a time when the support of the community and voters is key, and where "six out of ten Americans support the national legalization of marijuana,” according to a study by the Pew Research Center published earlier this year.

Issues such as the crisis of opioids, trafficking, and the increase of communities at risk could reformulate the narrative around the consumption of marijuana nationwide, adding to the radical transformation that the country is already experiencing. 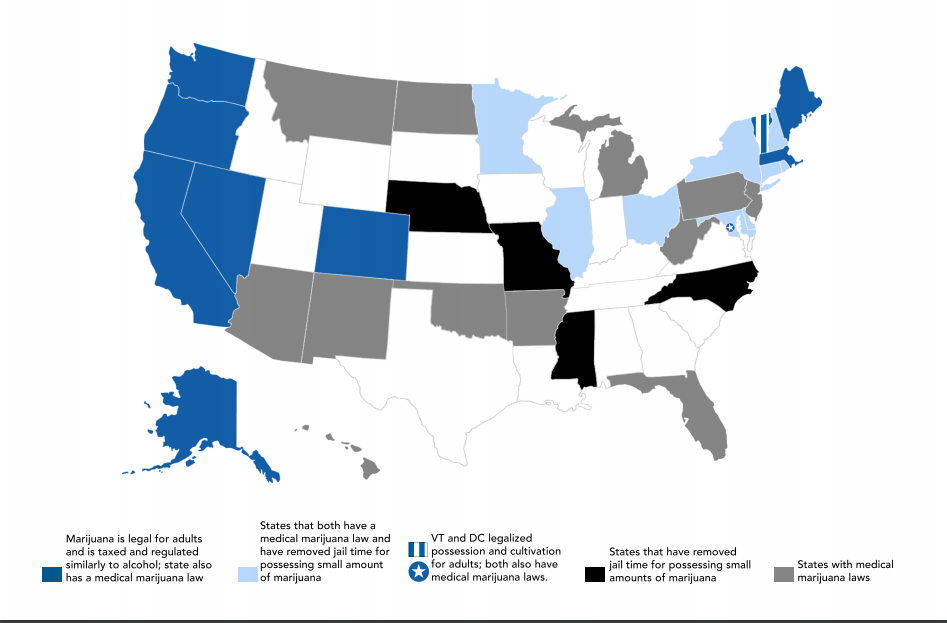