Trump's reelection campaign divides Latinos in two: those who invade and those who vote for him

Following the tragedy over firearms in El Paso and Dayton over the weekend, the Trump campaign has again focused its efforts on the Latino vote.

Before deciding to open fire on hundreds of people outside of a Walmart in El Paso, Patrick Crusius published a manifesto on the disputed website platform 8chan that argued his attack was "in response to the Hispanic invasion of Texas."

Police officers have had little doubt when describing the attack as a hate crime driven by xenophobia, especially in the case of a city like El Paso, where 80% of the population is of Latino origin, and has been the focus of President Donald Trump's anti-immigrant policies.

Since his presidential campaign, Trump has listed Latinos as "criminals, traffickers, and very bad people," repeatedly using the word "invasion" when referring to undocumented immigrants.

His favorite tool for campaigning about it has been social media ads, especially on Facebook.

A New York Times analysis showed that since January, "Trump's re-election campaign has posted more than 2,000 ads on Facebook that include the word 'invasion' as part of a barrage of advertising focused on immigration." 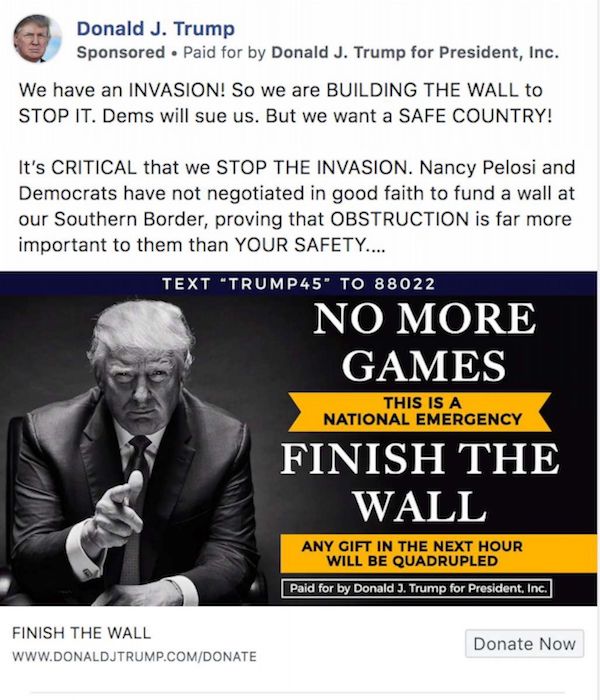 While it is difficult to determine the effect of advertising on hate crimes in specific numbers, the effectiveness of hate propaganda is a proven fact throughout history.

According to Griffin Sims Edwards, a researcher at the University of Alabama, and Stephen Rushin of Loyola University in Chicago, Trump's election as president "was associated with a significant statistical increase in hate crimes in the United States."

In an investigation entitled, “The effect of President Trump's election on hate crimes,” both investigators determined that “counties that voted for President Trump by the widest margins in the presidential election experienced the largest increases in reported hate crimes.”

The conclusion of Sims and Rushin is that, although provocative rhetoric is not the only thing necessary for hate crimes to increase, the election of Donald Trump as president of the United States “may have validated this rhetoric in eyes of perpetrators fueled the hate crime surge.”

Therefore, it seems that for the Trump campaign there are only two types of Latinos: the scapegoats that feed its white nationalist followers, or those who could vote for him.

Like his Facebook campaign that warned of a Hispanic "invasion" in the country, the president's marketing team launched a new campaign just 48 hours after the shooting in El Paso, targeting the Latino community in the region.

According to The Guardian, advertising under the slogan“Join Now!” was promoting the Fund The Wall Tour 2019 of Latinos By Trump in El Paso, an effort that featured “66 similar Facebook ads seeking the support of Latinos since Monday.”

It seems like there is no tragedy big enough for the Trump machinery to stop profiting. To get AL DÍA Print Edition at the comfort of your home, please click here
TAGS
Latinos
Trump
2020 Presidential election