A recent report by the Office of the Controller reveals that the city must do more to create a workforce reflective of the diversity of the population it serves.

The city’s hiring practices must advance to...

The FY18 Exempt Employee Diversity Review issued in early April was the first of its kind by a controller’s office in Philadelphia.

City Controller Rebecca Rhynhart told AL DÍA that, as part of her job to make the city work more efficiently and effectively, tracking diversity is an integral part of the equation.

“The more diverse our workforce is, the more representative of the people that we serve, the better we will serve them,” Rhynhart said in an interview.

The city controller wants to better understand where each municipal department and the offices of elected officials stand in the effort to develop a government and city workforce that is well-representative of Philadelphia’s population. The 2018 fiscal year metrics will serve as a baseline for deeper inspections in years to come.

The office’s report extracted data from the city’s legacy payroll system to examine racial diversity among 4,600 exempt employees. Exempt employees are workers that are not hired through the civil service system. Understanding this section of the workforce is a starting point for the controller to assess how hiring decisions are being made by department commissioners and directors. The analysis breaks down into four categories: All Exempt Employees, Exempt Employees with Salaries Greater than $90K, New Exempt Hires, and New Exempt Hires with Salaries Greater than $90K. Rhynhart noted the particular importance of the new hire categories to track how recently introduced hiring practices are being implemented.

Diversity was measured in this review on the basis of race only.

Findings from the report identified a significant overrepresentation of white employees in the workforce in comparison to the city's overall population. In a city that is only 35 percent white, white employees represent 48 percent of the exempt workforce. That number increases to 58 percent in the section of the report for exempt employees with annual salaries greater than $90,000.

The analysis also shows an alarming underrepresentation of Hispanics in the workforce. In a city that is 14 percent Hispanic and growing, only 7 percent of all exempt employees and only 3 percent of those that earn more than $90,000 a year are Hispanic.

Rhynhart told AL DÍA that these findings serve as a check for each department to hold itself more accountable - including her own.

“I think that we’re not doing well enough,” she emphasized. “We need to do better.”

Immediately following the release of the report, Mayor Jim Kenney was asked about its findings by Philadelphia Magazine at-large reporter, Ernest Owens, during a meeting with the African American Chamber of Commerce. Owens asked why 48.2 percent of exempt employees in the city’s workforce are white in a city that is 66 percent non-white.

“We have a hard time hiring Black people for these jobs because they’re so super-talented and too overqualified that they choose to run after the private sector instead. They don’t want to take the pay cut,” Kenney said.

The response was criticized in an article about the incident written by Owens. The journalist pointed out how Kenney had made a mistake all too often made by white leaders in addressing systemic racial inequity. His comments not only overlooked the deep-rooted patterns of workforce discrimination at play, they shed all responsibility on the part of a majority-white city leadership and placed blame on people of color for not being more represented. When asked about the mayor’s diversity practices, Williams said, “If he had a report card he would get an ‘F’. He gets an ‘A’ for imagery and an ‘F’ for effort and results. He talks about diversity, he doesn’t do anything about diversity.”The senator feels that there are there are far too many Philadelphians without a voice in the government and in the city because they are not fairly represented under Kenney’s administration.

He blames lack of diversity in the mayor’s cabinet as part of the problem, noting that only four of the 14 officials are people of color. There are no Latino or Asian members.

Williams described the mayor’s diversity outlooks and strategies as misguided and empty.

Upon taking office in 2016, Kenney pledged to make an administration as diverse as the population of voters that had elected him to the position. He appointed Nolan Atkinson as Philadelphia’s first chief diversity and inclusion officer to help build a more inclusive government and city workforce.

Atkinson’s objective in the role is to steadily build a government workforce that reflects the racial, ethnic, and gender makeup of the city.

He began by listening. Atkinson met with cabinet officers and leadership across departments to understand the main issues they were having in recruiting and retaining a diverse workforce.

Based on those conversations he began workforce planning with each department. The planning placed emphasis on ways in which each department could develop more robust recruitment pools to help find candidates that may not have traditionally applied to work as public servants.

According to Atkinson, the Office of Diversity & Inclusion not only helps each department conduct workforce annual planning, they also visit each department on a quarterly basis. The office helps ensure diverse resume screenings, and diverse interview panels are utilized to mitigate the effects of implicit bias.

Atkinson told AL DÍA that he feels the mayor has made a real commitment to building a diverse and inclusive workforce, but the impact will not happen overnight.

“I think when I got here I was hopeful that we could do everything in year one,” said Atkinson. The mission proved to be more complex than he could have expected. Many factors go into making long-term and impactful change and full commitment to progress is critical, not only from the mayor’s administration, but every department leader involved.

Atkinson said that an issue that makes his job even more challenging is attrition. He is not only concerned about the recruitment of diverse and healthy workforce, but also how that workforce is cared for once it is secured.

City Resource Groups (CRGs) are one device which the Office of Diversity & Inclusion has deployed to help better understand and care for the developing workforce. The CRGs are meetings in which city employees with shared backgrounds and experiences can gather to provide feedback to the office and find support in the work environment.

Building more accurate data systems is another crucial facet of beginning those long-term changes. Information is key to assessing the effectiveness of the office’s work and keeping the process transparent. Atkinson said he works closely with city database operators to better understand how information is being collected and what questions to ask.

As a matter of transparency, the Kenney administration releases an annual Workforce Diversity Profile Report to outline the diversity of the city’s workforce each year.

The profile provides detail on all departments that report up to the mayor. Both civil service and exempt employee groups are outlined in the review. The report also assesses workforce diversity on the basis of gender and sexual orientation.

When asked about the FY18 Exempt Employee Diversity Review, Atkinson said, “I haven’t spoken with the Controller. I’ve looked at her report, I’ve read it, I looked at the report that we put out three months earlier. I don’t see a lot of difference, I see decimal point differences in various categories.”

His comments are valid. Numbers regarding the exempt employee workforce in the report issued by Atkinson’s office nearly mirror the numbers found by the Controller’s analysis. The City Controller’s report also examines elected offices such as City Council, the District Attorney’s Office, and her own, but the metrics are less than a percentage point apart.

“Am I satisfied?” Atkinson continued, “No, if I see what the percentages are for Asian Americans, Hispanic Americans, I’m not satisfied. I know that the Hispanic population is growing and we need to do a better job and work at this diligently to get those numbers back and we have to be more focused.”

“It should be a culture and not just a person,” Senator Anthony Williams said in his conversation with AL DÍA. His comments were directed at the Mayor’s delegation of the work to the Office of Diversity & Inclusion.

The senator also demanded that Kenney step forward to make an apology. 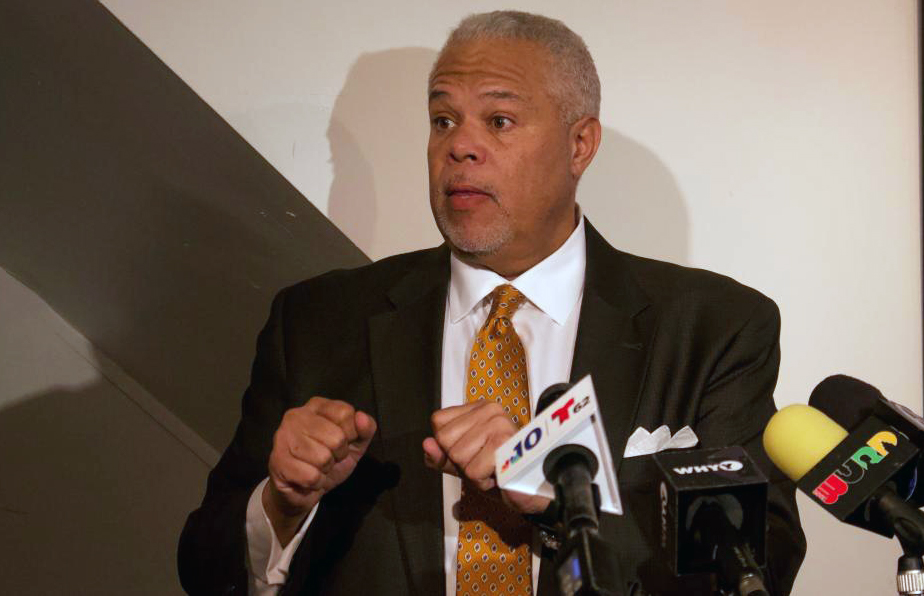 “We’re waiting for an apology,” said Williams, “He has had enough time to realize that his statement has hurt a lot of Philadelphians.”

Although the mayor has yet to make that public apology, a statement sent to AL DÍA from his Communications Director, Deana Gamble, last Friday said, “The Mayor’s initial comments at the African American Chamber of Commerce meeting did not accurately reflect his own personal commitment to ensuring a diverse workforce, or the work that has been done to make real change within the ranks of City government.”

The statement emphasized that the improvement of diversity and inclusion throughout the government has been a priority of Mayor Kenney’s since the first day of his administration.

“Though we have done a lot of work to support diversity and inclusion,” the Communications Director wrote, “we understand that there is still much more work ahead of us, and the administration is committed to doing what is required to have a workforce that better reflects the diversity of our great city.”

Perhaps no one understands this more than Nolan Atkinson, who told AL DÍA he remains steadfast in his commitment to his goal of creating parity between the leadership of city government and its workforce and the community that it serves.

“That’s certainly my goal, it hasn’t changed. That’s what I come to work for every morning,” said Atkinson.

To get AL DÍA Print Edition at the comfort of your home, please click here
TAGS
Philadelphia
politics