Attack in Barcelona: at least 13 people dead and 50 injured

Police and emergency personnel in the area in which a van has hit this afternoon several people walking on the Ramblas of Barcelona. EFE/Andreu Dalmau

During this Thursday’s afternoon a van railed against people who were walking one of the busiest streets of the touristic city.

Around 5 PM (local time) a white van drove at full speed against passersby who were in the downtown area, specifically on the Ramblas, known as the epicenter of tourism in the city of Barcelona, ​​one of the most visited summer destinations in Europe.

The vehicle ran 550 meters at full speed, doing zigzag and stumbling over hundreds of people who were in the area, to finally hit a commercial post on the road.

Witnesses of the place say that the vehicle could not continue its journey by the amount of people under the wheels.

Las Ramblas de Barcelona are the main pedestrian arteries of the city and the most important tourist transit place, so the accelerated movement of the vehicle was deliberate. 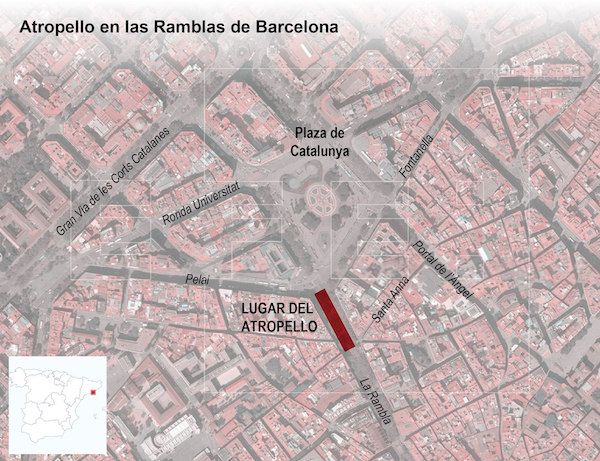 The two passengers who were in the vehicle fled the place, leaving a passport in one of the seats belonging to a Spanish citizen, originally from Melilla (Spanish autonomous city in North Africa).

The perpetrators are currently on the run in the small streets of the Raval neighborhood in the center of the city, and reports indicate detonations of firearms in the area.

Police officials have said they have arrested one of those responsible, and have identified another one.

The security forces have deployed a control operation and have activated measures covered by terrorist alarm situations, including restrictions on public transport, vehicular control points on the main access roads to the city, and increased security in main stations and airports.

Representatives of the Government of the Province of Catalonia have declared the "suspension of recreational activities" and have urged citizens not to leave their homes while the situation is controlled.

Investigation teams have identified the person responsible for the rental of the vehicle as Driss Oukabir, a French citizen, originally from Marseilles and the first person arrested. 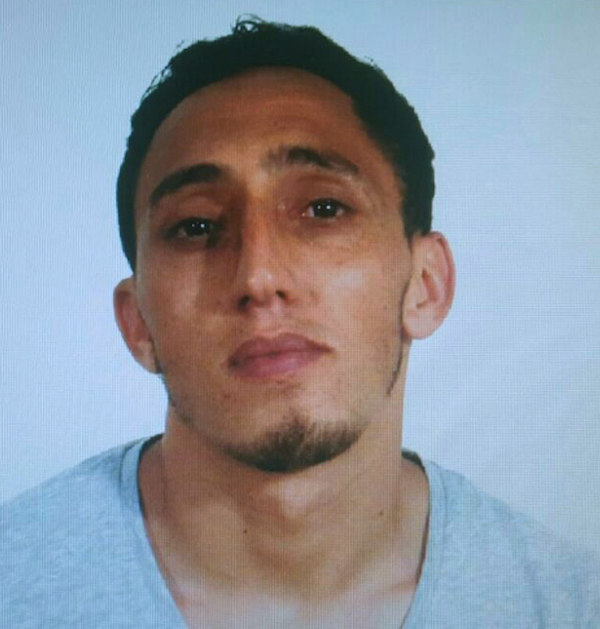 Photograph provided by the National Police of the youngster of Maghrebi origin who responds to the name of Driss Oukabir, legally resident in Spain, who according to police sources was the one who rented the van that was carried out today the mass outrage on the Ramblas of Barcelona, In which at least 13 people were killed and 50 wounded. EFE

A second van involved in the attack has been located in the town of Vic, about 60 kilometers from the scene.

Isolated incidents have been reported outside the city center, where vehicles have avoided security controls, even winding down police officers.

The community has been organized to facilitate the transportation of people who have taken refuge in the shops of the city center for more than four hours, as well as social and psychological assistance.

The Barcelona bombing is the second most serious terrorist act in Spanish territory, after the events that occurred on March 11, 2004.

To get AL DÍA Print Edition at the comfort of your home, please click here
TAGS
barcelona
attack
terrorism

From Barcelona to Los Angeles, the new edition of Primavera Sound

The Mobile World Congress is back in Barcelona

The Andean New Year from the Mediterranean

Matalunes: Manu Chao's concert that sets an example and gives hope to the cultural sector in Spain