State Representative Angel Cruz recently spoke with AL DÍA about his showdown with rival Councilwoman Maria Quiñones-Sánchez in the Democratic primary election on May 21.

“I’m not a stranger to politics and I think that I can serve better as a councilman in the 7th councilmanic district because I bring unity,” Pennsylvania State Representative Angel Cruz told AL DÍA in a recent newsroom visit.

On May 21, Cruz will face off against Councilwoman Maria Quiñones-Sánchez in the Democratic primary election for the 7th councilmanic district seat in Philadelphia City Council.

Quiñones-Sánchez is currently the only Latino member of City Council, and has represented the 7th district in City Council -- a district where more Latinos reside than in any other in the city -- since 2008. In each election that she has won for that office, she has done so without the support of ward leaders and the Democratic City Committee. This year, eight of the twelve ward leaders in the district have supported Cruz with the party’s endorsement.

The unifier vs. the disruptor

“When you’re an elected official, you should never use that terminology,” he continued, “You’ve got to learn how to agree to disagree because today you may not be with me, but tomorrow I’m going to need you.”

The deep feud between these two politicians has persisted for over a decade.

The state representative, who says that he supports the idea of term limits in council and stands against councilmanic prerogative, feels that Quiñones-Sánchez “bullies” those that don’t see eye-to-eye with her within the district. Quiñones-Sánchez insists that she did not get into politics to make friends.

“I entered politics to be a disruptor and change the course of what I thought was hostile policy against the communities that I wish to represent,” she told AL DÍA last month.

“She has failed to be inclusive with others,” said Cruz, “she doesn’t know how to play in the sandbox and share the tools.”

The 7th district includes parts of Kensington, a neighborhood set at the center of the opioid epidemic in Philadelphia. When asked about his approach to tackling the epidemic, Cruz emphasized a firm stance against the construction of a supervised injection site in the neighborhood.

“Well, first of all, I’m not for the safe injection site. That doesn’t help,” he began. “That’s part of the problem. And putting it in Kensington, where the most addiction is, the problem will never be solved and it will always stay there in Kensington.”

Many members of the Kensington community perceive the installment of a supervised injection site as an indication of surrender by a city government incapable of truly aiding their neighborhood.

While Quiñones-Sánchez has not been entirely opposed to the idea of such a site, the councilwoman has said that it must be one aspect of a more comprehensive reform approach by the city.

She has suggested placing a first site elsewhere to test its effectiveness before building one in Kensington. The councilwoman has also supported legislation introduced by Councilman Mark Squilla to rezone the area where the building would be located on Hilton Street to allow for more community involvement in the process.

Quiñones-Sánchez and Squilla have also played an active role in supplying social services to support the Kensington Initiative, a collaboration between federal, state and local law enforcement agencies to target criminal drug trafficking in the area.

Cruz told AL DÍA that more beds, therapy, and counseling are needed to help members of the district dealing with substance use disorder. But he indicated that there should be limits to the support extended towards people that are not proactively seeking treatment.

“The majority of the folks that are in the opiates crises that they’re in, many of them receive assistance from the Commonwealth of Pennsylvania, that means the welfare department,” Cruz said.

“Either you go get treatment or we’ll remove your benefits,” he continued, “We have to be lenient, but we have to be strong, and we have to help.”

Cruz also wants to hold pharmaceutical companies accountable for the crisis. He suggests implementing a 20-25 percent tax on companies engaged in activities that have contributed to the problem. This tax money would be spent on helping those who suffer from substance use disorders.

In his role as a state representative, Cruz has urged the governor and the attorney general to file lawsuits against pharmaceutical companies responsible for the opioid epidemic within the Commonwealth.

“They need to be held responsible, just like any other ordinary drug dealer on the corner,” he told AL DÍA. “They get prosecuted, so should these folks.”

Councilwoman Quiñones-Sánchez recently rejected a proposal backed by health officials and anti-drug activists that would have forced pharmaceutical sales representatives to register with the city and track their gifts to doctors.

Cleaning up the neighborhood streets

Cruz believes that fixing the larger problems that face the 7th district begins with assessing the smaller issues that impact its constituents on a day-to-day basis. Reducing trash and litter is a point of emphasis in his campaign.

He said that he would hire a sanitation officer for the district and set aside city-owned property where residents could dispose of large appliances such as refrigerators, washing machines, and televisions, so that they’re kept off of the street.

“I also want to clean the alleyways,” he told AL DÍA, “The debris and the trash that are in these alleyways, there’s an infestation of rats.”

Quiñones-Sánchez has played a leading role in the city’s Resilience Project, a unified attempt by the city to combat the opioid crisis. A facet of that work has included clearing drug encampments as well as reducing trash and litter. 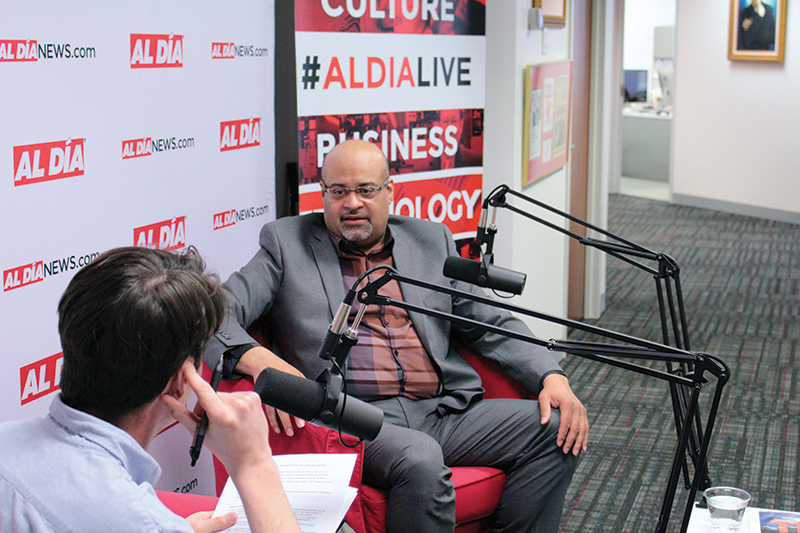 Another contentious issue in Philadelphia politics with deep implications in the 7th councilmanic district is the sweetened-beverage tax.

Quiñones-Sánchez recently sponsored a bill that would allow City Council to reduce certain aspects of the sweetened-beverage tax beginning in 2020. It would also permit the hiring of a consultant to research the tax’s economic impact on the city and seek out alternatives. Cruz criticized this idea.

“She bashes the mayor for the soda tax, but it’s already implemented,” he said.

“If you have something else that will take place of the soda tax, that will fund pre-k and recreation centers, let’s hear it,” Cruz continued. “If you were not in support of this, if you were not approving of the mayor’s initiative with the soda tax, why didn’t you do it three years ago when he implemented it?”

Quiñones-Sánchez was the only Democrat in council to oppose the tax when it was voted on in 2016. She has consistently referred to the sweetened-beverage tax as a regressive tax which disproportionately impacts constituents living in the 7th district.

While Cruz is not entirely in favor of the tax, he said that he has yet to identify any better options to support early childhood care, community schools, and neighborhood restoration in the district.

“Give me an alternative, and then I’ll make a decision,” he told AL DÍA.

Representative Cruz is open about his associations with John Dougherty and IBEW Local 98. Despite the corruption charges facing Dougherty, Councilman Bobby Henon, and six other leaders within the electricians union, Cruz remains happy to accept financial contributions from Local 98.

“Right now, we send letters to every union and whatever union accepts and wants to give me a donation will gladly be accepted,” said Cruz.

According to recently filed campaign finance reports, Quiñones-Sánchez has raised $160,263 in total for her campaign, compared to $7,448 by Cruz.

“If Local 98 accepts and gives us a donation, why wouldn’t I take it? It’s not money that is John Dougherty’s.”

Quiñones-Sánchez has fiercely condemned Cruz for this position, but he calls her a hypocrite.

He insists that the councilwoman leverages the issue to ruin the reputation of others, while she herself cannot claim innocence.

“You took money from 98,” he said, “you affiliated with people that went to jail. Everything that you’re accusing me of, you sit in the same chair that I do. But the difference is that I don’t deny it, she does.”

In 2015, Local 98 also helped LUPE, a political action committee led by Cruz and other Latino leaders within the 7th District, attempt to take down Quiñones-Sánchez in the Democratic primary. Local 98 channeled $102,000 through LUPE and Friends of Angel Cruz in support of Quiñones-Sánchez’s opponent, Manny Morales.

Racist, homophobic, and sexist remarks made by Morales on social media led to controversy and he lost the election. The contributions made to Morales’ campaign by the Friends of Angel Cruz and LUPE exceeded campaign finance limits and the groups were fined by the Philadelphia Board of Ethics.

Quiñones-Sánchez’s campaign also paid fines for receiving excessive contributions from other political committees during the 2015 election.

The letter to the City Commissioners Office also requested training to be implemented for election workers to ensure that voters will not be unfairly influenced in the upcoming primary.

The councilwoman accuses Cruz and his affiliates of using the money received from Local 98 in 2015 to fund a fraudulent voter assistance program.

According to Quiñones-Sánchez, more than 1,000 ballots were cast with assistance in the 7th District, versus approximately 200 assisted votes cast citywide in that election. She believes the system may have been exploited to influence voters.

Cruz brushed off the allegations.

“She reads the smoke. She’s already crying defeat,” he told AL DÍA, “Nothing has been committed illegally or else people would have wound up in jail by now.”

He said he would welcome any form of investigation into the matter.

“We have nothing to hide,” Cruz affirmed.

Joe Grace, a spokesman for the PA Attorney General’s office, confirmed that the letter from the councilwoman had been received.

“As we demonstrated in the 197th House District race, which overlaps the 7th Council District,” Grace told AL DÍA, “we will not hesitate to prosecute election law violations -- wherever we find them.”

Benjamin Waxman, Director of Communications for the DA’s Office, had no comments to make regarding any investigation in the 7th councilmanic district.

“I can say that we intend to deploy a robust Election Day Task Force designed to safeguard against any fraud, intimidation, or other shenanigans,” said Waxman. “This task force will operate not only in the 7th District, but the entire city.”

To get AL DÍA Print Edition at the comfort of your home, please click here
TAGS
podcast
Philadelphia
City Council