Participants in the march emerge from underneath the bridge at Lehigh and Kensington avenues. The march took individual's past Tusculum street, which is known for high volumes of drug activity in the area. Photos: Matthew Haubenstein

Members of the community take to the streets of Kensington to remember those who’ve died from overdose and to spread awareness of the growing opioid epidemic in the City.

To celebrate the day, Philadelphians took to the streets of Kensington for the ‘March In Black’ to honor those individuals lost to opioid addiction and who have died due to overdoses. The ultimate goal was to raise awareness for the growing drug epidemic that plagues not only these streets and the city, but the nation as a whole.

Participants in the march first gathered at York-Dauphin station underneath the El. From there, hundreds of people made the mile long march, stopping along the way at Huntingdon and Somerset stations, to McPherson Square for a candlelight vigil.

Dan Martino was the organizer of this event and, with help from organizations like Prevention Point and Angels in Motion, was able bring the community together as a whole to raise awareness for this issue. To Martino, awareness is the ultimate goal. Dan Martino, 33, stands in front of the “March In Black” banner at York-Dauphin Station. This was the first of 4 stops on the march's mile long route through Kensington.

“In a word: Awareness,” said Martino. “We had 907 overdoses last year which is three times the murder rate in the city of Philadelphia.”

Although the number of deaths due to overdose were high in 2016, Martino stated that the expected number of deaths is around 1,200. Martino sees this excessive loss of life as a public health issue, which is something that needs to be addressed.

José Benítez, Executive Director of Prevention Point, said “We are not going to forget that people have passed from drug overdoses. We are going to keep doing this every year till we get down to zero.”

Benítez believes that the stigma of drug addiction keeps people from seeking help. Instead of being open and accepting of someone’s drug problem, many shame them, causing them to find solitude in abandoned buildings and under bridges instead of seeking help.

“We are losing too many people and we can prevent some of these deaths,” said Benitez. “We have to bring the stigma of this disease out into the open and begin to say to people that drug use is part of our lives and we need to save people.“

Participants in the march were asked to come dressed in black to show solidarity with one another, as well as to pay respects to those lives lost to drugs and addiction.

“We are dressing up as we would if you were going to a funeral,” said Benítez. “It’s a way to remember people humbly and say that we remember your souls. We remember your lives.”

After a speech from Martino to officially start the event, Elvis Rosado, the Education and Community Outreach Coordinator at Prevention Point, was the first speaker at York-Dauphin station. Elvis Rosado, 52, giving a speech to the gathered crowd as he holds the name of a loved one who has died due to an overdose.

In his speech, Rosado stressed the need for education on this matter. From the use of the lifesaving drug Narcan to understanding the high risk of overdosing while sober, Rosado did his best in the short amount of time to inform the people.

“We have to remind ourselves that we have a couple of things that we are responsible for:” said Rosado. “To educate ourselves; to educate the people we love; To support the people that protect us and put their lives on the line for us; and to our officials to support the movement to make Narcan accessible to everybody.”

Many participants in the march held up tombstone shaped signs which had the names of individuals who’ve lost their lives to drug overdoses. Rosado held one as well. The name on the tombstone read Charles Ebsworth, Jr, his brother’s brother-in-law. Rosado shared with the crowd that Ebsworth had died of an overdose on Christmas Eve 2016 and was found on his bathroom floor Christmas Day. It was an emotional story that many of the individuals who were listening can relate to.

One of those individuals was Erasema Delgado. Erasema Delgado, 58, stands with her children and grandchildren at the March In Black event. Delgado and her family marched for the various friends and family members who’ve lost their lives to drugs and addiction.

Two months ago, Delgado became one of the many mothers who’ve had to bury their own children. Her eldest son had been abusing drugs since the early age of 14. As he grew, his habit worsened. Delgado herself witnessed her son overdose in the past. Luckily, she was present to called 911 and save his life.

This time however, she was not able to save her son from his crippling addiction.

Delgado’s son spent the weekend before his death partying and using. In the upcoming week he would be heading to court to fight for custody of his daughter. Delgado believes that her son was anxious and nervous about this, so to cope he got high.

On the day of her son’s death, Delgado remembered seeing him at 6 o’clock in the morning. She said that he appeared to be fine, but three and a half hours later he was gone.

Delgado’s son was found dead on her mother’s bathroom floor. The culprit? A bag of heroin that had received for free from a dealer on the ave. Delgado stated that the batch her son injected himself with was mixed with cocaine and Fentanyl, which is another opioid painkiller that is extremely potent. So much so that Delgado said “just smelling it can kill you.”

Delgado’s son is just another example of the needless deaths due to drugs. To help avoided this, Delgado calls on the city to take action. Not only for her son and the countless other victims of addiction, but for their loved ones as well.

“The city needs to do something,” said Delgado. “I can’t imagine what he went through. It kills me because he has a great daughter and her birthday was the following day. She’s only four and she asks for him every day. She wants him to come back from heaven. It’s not fair. The city has to do something.”

Although her son succumbed to his addiction, that did not mean he didn't attempt to fight back. Over the years he checked himself into rehab centers and joined programs to try and kick his habit, but to no prevail. Not because of his lack willpower to do so, but because of the facilities themselves. A woman holds a candle during the vigil at McPherson Square. Her signs read “4 people a day die because of an overdose in Philly.”

More recently, Delgado’s son attended a facility at Broad and Lehigh. He detested it so much that he told his mother that it made him want to go out and get high even more. Delgado asked “What kind of program makes a current addict go back and get high after supposedly getting help?”

Delgado believes that many of the programs and facilities in the area are only there to make money. Profiting off the sick and diseased individuals suffering from addiction. Her son was one of those individuals who fell victim to his disease with the lack of care, but Delgado hopes others will go else were and be treated properly.

“A Lot of people aren't getting the help they need,” said Delgado. “There is help out there. They are just going to the wrong people.”

As the March continued, participants gathered around the steps of each station along the route to listen to individuals give speeches. These individuals ranged from advocates such as Rosado, as well as candidates for District Attorney of Philadelphia Larry Krasner and Beth Grossman. 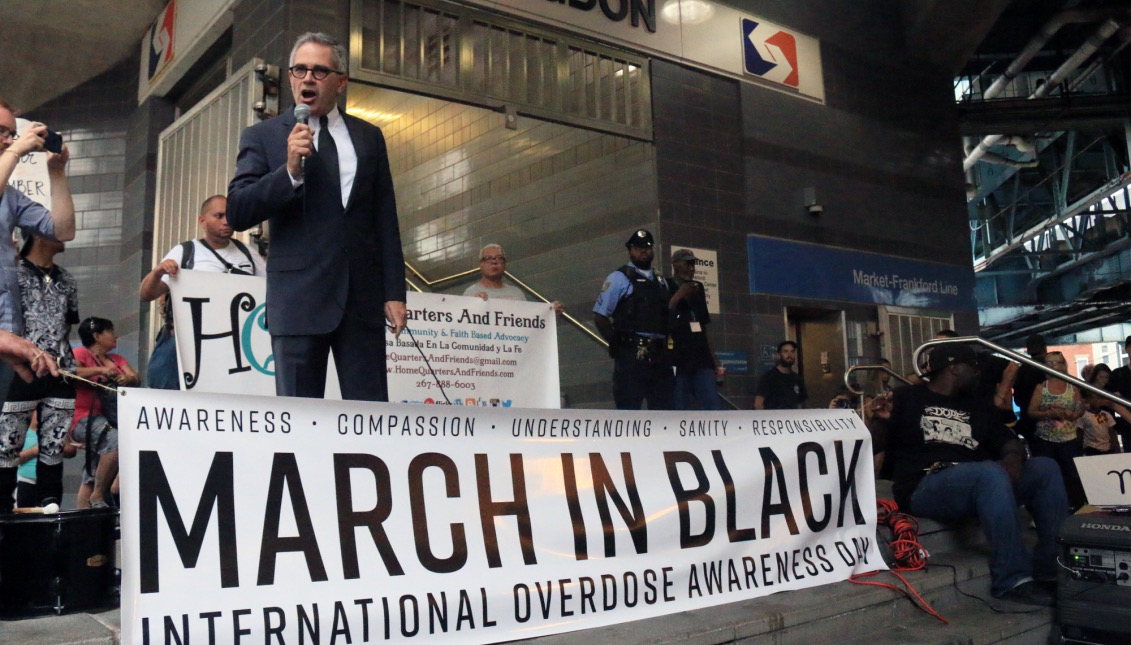 Larry Krasner, the Democratic Candidate for District Attorney of Philadelphia, stands at the Huntington El stop to give a speech to the crowd gathered there. In his speech, Krasner said “We need not to be silent. We need to be loud. We need to tell power what power is going to do.”

Krasner spoke on the steps of Huntington Station, repeating the phrase “Silence equals death” in English and Spanish. Krasner also placed the blame of this epidemic on big pharmaceutical companies for the creation and selling of opioid pills, which are common gateway drug to heroin.

Grossman talked about her roots in the Kensington area, stating that her parents owned a candy store years ago near Allegheny and Kensington avenues. She also said that “Addiction is not a crime. It is a public health crisis. It is an illness.” Jose de Marco of ACT UP Philadelphia and Dan Martino hold the “March In Black” as they lead the march down Kensington avenue towards Huntington station.

When the march arrived at McPherson Square, participants gathered at the foot of the steps where many overdose victims have been found before. As the crowd packed the area, candles were disbursed and the names of overdose victims were read aloud. Afterwards, individuals were allowed to step forward and share a few words about the loved ones they had lost.

As the march winded down, volunteers stayed to lend an ear, be a shoulder to cry on, offer advice, or to even help someone seek help for their addiction.

Rosado was one of those volunteers who remained behind to help. Where others might look past addicts or users, Rosado aims to step forward and be the helping hand they need.

“Sometimes the person who uses and abuses drugs is sometimes seen as expendable or people sometimes look the other way and don't realize that that’s a human being,” said Rosado. “That is somebody's child. Somebody's mother, father brother, sister, or grandparent. They are human beings.” A march participant holds a sign with the words “Our children should be burying us…” written on it.

Being someone who not only trains individuals on how to revive an overdose victim but someone who does it himself frequently, Rosado is often confronted by people who disagree with his want to save addict's lives. Yet, this negativity does not keep him from doing his job. In fact, Rosado’s desire to help is a refreshing belief in a city where an epidemic fills the streets with loss and heartache.

“Every time I revive somebody, people ask me ‘why do you even bother? They are probably just going to use again.’ “ said Rosado. “Yeah, they may, but if it happens again I’ll revive them again. The idea is that we save people’s lives until they are ready to save their own.”

YoungMoms is Making a Difference in Southern Chester County