From a Jersey diner to the U.S. Attorney's Office, the next president of the Hispanic Bar Association of Pennsylvania discusses the nation's urgent need for more Latino lawyers.

By John N. McGuire
This story appeared in the December 20, 2017 issue of AL DÍA
It may seem unlikely, but President-Elect of the Hispanic Bar Association of Pennsylvania (HBAPA) Jacqueline Romero’s passion for the law originated in a New Jersey diner.
Growing up, Romero spent a great deal of time at Romero’s Restaurant, which her family owned and operated in Tenafly, New Jersey. While she said no one in her family was a college graduate or in pursuit of a white-collar career, the diner was frequented by local politicians, lawyers and other professionals.

“You learn a lot about people serving them coffee and making conversation,” Romero said during an interview with AL DÍA.

The restaurant also gave a young Romero access to plenty of newspapers and other reading materials. When she wasn’t helping her family out around the restaurant, she was becoming an avid reader, one concerned about the pressing political and social issues of the day.

“My dad jokes that I could read the New York Times by age four,” Romero said.

As she got older, Romero became increasingly interested in studying law, and now she is a U.S. Attorney for the Eastern District of Pennsylvania, in addition to her role with the HBAPA. She will begin her tenure as president of that organization in January.

Romero is part of a startlingly underrepresented demographic in the U.S. legal world. While Hispanic people represent 18 percent of the total U.S. population, Romero said they comprise only about 4 percent of the nation’s lawyers. For Latinas such as Romero, the numbers are even more concerning, as they represent less than 2 percent of lawyers in the country.

With the HBAPA, Romero strives not only to protect and defend the rights Latinos in the U.S., she also works to improve their presence in the legal field. 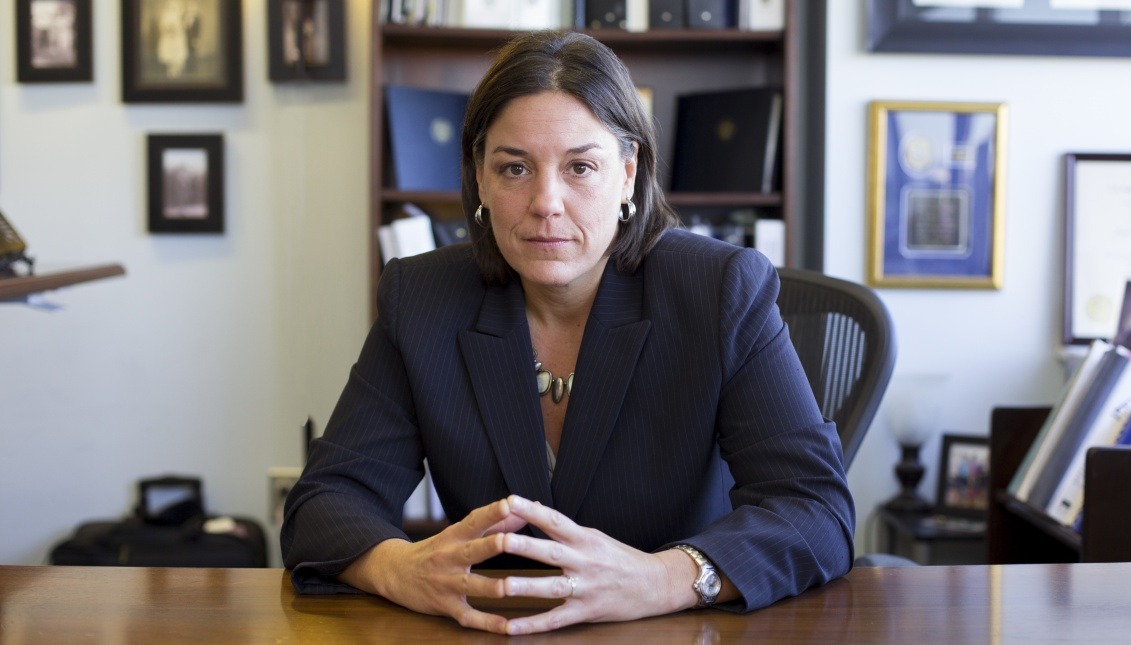 Romero’s heritage is a clear point of pride for the president-elect of the HBAPA. While Argentina, Italy and Finland are all parts of her ancestry, it’s her family’s Spanish history that she focuses on during her conversation with AL DÍA.

She tells the story of her grandfather, Diego, who came to the U.S. alone when he was 16 years old, leaving his hometown of Tal, a coastal community in Galicia, Spain.

“I like to think of him as being very brave,” Romero said. “To come here at that age and start a life for himself alone.”

Diego arrived in the U.S. with few belongings. Financially, he had only a small amount of change in his pocket. For direction, all he had to guide him was the address of a boarding house in Tenafly where he knew a few other men from his hometown were living.

For many years, Romero’s grandfather worked odd jobs as a laborer and fisherman, saving his money along the way. When he finally saved enough, he was able to open what Romero called “a little bodega on the side of the road,” which ultimately grew into her family’s diner.

Remembering back when she was flipping through newspapers at the diner, Romero said there was one author she often read who struck a particular chord with her. He was an acclaimed and nationally syndicated Chicago columnist named Mike Royko.

As a champion for the working class, vocal on issues of political justice, Royko wrote with grit. Romero admired him for it.

For the young Latina, Royko “lit a fire.” She began to consider pursuing a career as a writer, but as she got older, her passion for the law grew. She realized she wanted to be able to advocate for issues in the way only a lawyer can and to have “the ability to make changes that a lawyer can make.”

As a first-generation college student, navigating her path to becoming a lawyer was not an easy task. She had no one in her life that could guide her through the college experience, let alone help her prepare for crucial milestones in becoming a lawyer, such as the LSATs.

“I didn’t have mentors or people in my immediate family who had done that sort of thing,” she said.

Despite her often difficult circumstances, Romero earned her bachelor’s degree in political science from the College of New Jersey and graduated from Rutgers University School of Law in Newark.

A Latina in the Law

For Romero, her career as a lawyer shed light on certain misperceptions. There have been many moments in her career, she said, in which her fellow legal professionals have underestimated her.

Romero doesn’t know if this issue stems from the fact that she’s Latina, or a woman, or that she comes from humble means. No matter the source, Romero doesn’t see these incorrect views as a challenge.

“I actually think it’s an asset when people underestimate me,” Romero said. “I am often the most prepared lawyer in the room when I walk in for a court proceeding, a settlement conference, whatever it is.”

“I think because I don’t come from means, it’s important to me that when I show up, I’m completely prepared,” Romero continued. “So people underestimating me usually counts against them.”

The Hispanic Bar Association of Pennsylvania

In the mid-1970s, the Philadelphia Bar Association appointed Nelson A. Diaz to lead a committee that would promote Hispanic civil rights and provide translators to serve the city’s growing Latino community. Diaz is the first Puerto Rican ever admitted to the Pennsylvania Bar, as well as a former city solicitor and former judge.

This committee eventually grew into what is now the HBAPA, which was formalized in 1983.

Today, the organization continues to expand on the legacy of its founding members, promoting justice for not only the Hispanic community, but all communities. The HBAPA hosts mentorship receptions for law students and panel discussions with legal experts, while also providing continuing legal education courses.

Romero will begin her tenure as president of the HBAPA in January, following current president Juan M. Baez, who is the deputy managing attorney of the AIDS Law Project of Pennsylvania.

As president, Romero said she is looking forward to organizing events, including an upcoming fundraiser on January 30 to benefit Puerto Rico after the devastation caused by Hurricane Maria. Romero said this event, which will be held at City Hall, will include a speech from Mayor Jim Kenney.

Romero also hopes to expand the HBAPA’s efforts across the state.

“A lot of our activities center on Philadelphia, and I would like to see a little bit more outreach with places like Pittsburgh and other areas where we have Latino lawyers who are looking for the support of our organization,” Romero said.

Romero also serves on the Hispanic National Bar Association’s Latina Commission, a group founded in 2008 to improve the representation of Latinas in the legal profession. As HBAPA president, Romero plans to spearhead more Latina-focused initiatives, including networking opportunities.

A helping hand and an urgent need

The aspect of the HBAPA that Romero said she is most proud of is the organization’s scholarship fund, which provides financial assistance to Latino students pursuing careers in law.

Romero said the cost of law school can be a daunting roadblock for Latinos seeking to become lawyers. She relied herself on scholarships to help her complete her education, noting that the cost of a law school textbook alone can be about $500.

“You look at the cost of a legal education, it can be as high as $80,000 a year,” Romero said. “That’s a huge deterrent to Latinos who don’t understand why it’s important to be in the law, and why taking on that sort of debt is important.”

And why is it important for Latinos to be represented in the legal field? Because, Romero said, lawyers are the “voice of so many aspects of society.” From medicine to technology to government to education, lawyers play a major role in all of these societal cornerstones and more.

Further, when historians try to understand the issues that were most prevalent during specific time periods, Romero said they examine things such as Supreme Court decisions, law reviews and law articles to help develop that insight. Thus far, Latinos are largely absent from this process.

“We do not have a voice in history,” Romero said. “We’re just not there.”

The key to success

Romero is appreciative of her mother, who was not an academic but always stressed that her daughter needed an education.

“I think it’s one of the big regrets of (my mother’s) life that she didn’t have a high level of education,” Romero said.

Now, Romero recognizes that the way she focused on her education growing up is the reason that she has achieved her level of success. With every opportunity she gets, Romero communicates that understanding to young Latinos who want to build a career in the legal world.

Romero also emphasized that these students should find mentors, and she said that it's her "privilege" to be able to fill that role today. The HBAPA offers plenty of programs in which students can connect with established Latinos in the legal profession who are ready and willing to help.

To any aspiring Latino lawyers, Romero has the following message.

“Come to our events,” she said. “We would love to tell you how we did it.”

Honoring engagement and advocacy in the Latino community