The non-profit produces and ships airline food to families most in need across major cities in the U.S. impacted by COVID-19.

The coronavirus pandemic has brought to the forefront one of the many issues facing families across the nation — food insecurity.

According to Feeding America, more than 54 million people, including 18 million children may experience food insecurity in 2020, alone.

With the pandemic causing shutdowns, as well as many families to lose their jobs and struggle to put food on the table, an effort was made to help provide a solution.

Project Isaiah has aimed to serve as that solution.

Launched in late March 2020, the non-profit initiative produces and delivers boxed meals for those in need while protecting critical food service jobs in partnership with Gate Gourmet, one of the largest airline catering companies in the country.

“At the beginning of the pandemic, [Project Isaiah chairman Michael Klein] had the idea that we should figure out a way that we could basically save jobs and help people both at the same time,” said Devon Spurgeon, co-founder of Project Isaiah. 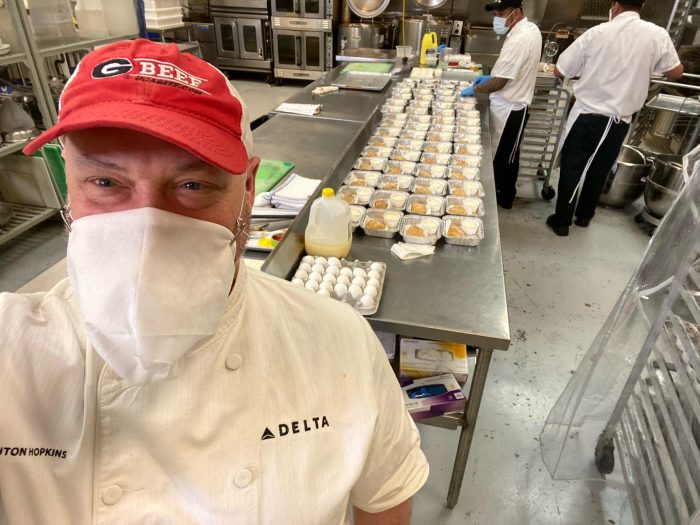 Spurgeon explained how the cities were chosen primarily by where the COVID-19 infection rates were highest.

In the nearly four months since it launched, Project Isaiah has provided more than 2.5 million meals nationally and more than 250,000 meals in Philadelphia alone.

In Philadelphia, Project Isaiah has worked with a number of local organizations, including the City of Philadelphia, Philabundance, St. Christopher’s Hospital and The African Episcopal Church of St. Thomas.

“We were really able to get a lot of food out to people in a short amount of time,” said Spurgeon. Many businesses and organizations have taken notice of the work Project Isaiah has been doing across the nation and has partnered in the effort. One of the which has been the Pro Football Hall of Fame.

Cris Carter, Pro Football Hall of Fame wide receiver and 8-time Pro Bowler for the Philadelphia Eagles, Minnesota Vikings and Miami Dolphins, has been one of the biggest partners for the initiative.

“The cities that were participating … pretty much matched where we got our NFL players from,” said Carter. “And given that we do have a number of ‘Gold Jackets’ that are in that target area, as far as huge risks of COVID, and being able to do something [and] potentially being able to help people who are in that same demographic, that’s the reason why I got involved.”

Spurgeon expressed how when Project Isaiah first launched, many people who had never needed public assistance before were hesitant to seek help because of the stigma surrounding it.

However, she praised Carter for being open and outspoken about his own struggles growing up with food insecurity.

“It was so helpful, I think, to the people and the communities [speaking of] the struggle that sort of exists on a day-to-day basis for so many Americans right now during this unusual period,” Spurgeon said of Carter’s involvement.

Carter has challenged other “Gold Jackets” to get involved, and at the very least, to donate $100, which can feed a total of five families.

The Pro Football Hall of Fame is a platform that allows the “Gold Jackets” to do great and help others, Carter said.

Jerry Haffey is another individual who has taken notice of the work Project Isaiah is doing and has taken on the effort of providing more assistance.

He was formerly the CEO of Ambrosia Treatment Center, where he helped treat those with substance abuse disorders and others impacted by the opioid epidemic.

Currently, Haffey is a partner at Haffey Ryan, a global procurement firm that imports goods from all over the world, based on the needs of the global market. Amid the COVID-19 pandemic, Haffey Ryan has had to switch its operations by providing PPE and other items to nonprofits nationally.

“We’ve been able to step in and assist a lot of different nonprofits throughout the country,” said Haffey.

Given his background in healthcare, Haffey has been able to do what he feels is his main purpose in life — helping people. And he’s continued doing so during this pandemic.

“When we got the call for Project Isaiah, we were in position to assist immediately and we took action,” he said.

“Those were just from us, saying, ‘We appreciate what you’re doing, love your mission [and] we’re here to help,’” Haffey noted.

Since taking on this new effort, Spurgeon said, it’s changed her.

“I’m a fundamentally different person from having done this work,” said Spurgeon, adding that she would encourage everyone to take some time to focus on giving back.

She noted how she’s found fulfillment in the many conversations she’s had with people on subjects that aren’t normally discussed, and how the pandemic has brought out a level of vulnerability in others. Project Isaiah has highlighted “the wonderful side of the world that often doesn’t get as much attention,” with people showing up and distributing food to their communities and to people they don’t even know.

“You just realize that level of fulfillment and that level of genuine engagement that I think is missing from a lot of our everyday lives … and it’s also showed me just the power of our amazing spirits,” said Spurgeon.

Donations to help grow this initiative and fundraise can be made through Project Isaiah's GoFundMe.

“Every penny goes to feed the families… even $5 can really make a difference,” said Spurgeon.

To get AL DÍA Print Edition at the comfort of your home, please click here
TAGS
Project Isaiah
food insecurity

ACLAMO to hold a fundraiser celebrating 44 years of service

The Latino Equity Fund has its first-ever leader