Chef Hugo Campos is expanding Philabundance’s catering and job training program to continue serving up delicious meals and brighter futures throughout the region.

While laughing and joking around onsite at the Philabundance Community Kitchen in North Philadelphia, you could almost mistake ‘Chef Hugo,’ as the culinary expert is known in the kitchen and throughout the organization, for one of the students. But along with his easy-going, matter-of-fact demeanor, Hugo Campos brings nearly two decades of experience in creating, concocting, and serving up delicious meals in the restaurant industry. In the past three years, he has been putting that knowledge to use both in the kitchen and classroom for the benefit of students who enroll in the Philabundance Community Kitchen (PCK) adult culinary arts job training program.

For nearly 20 years, PCK programs have offered students from a range of backgrounds and life situations free, 14-week training centered on not just cooking skills, but also “life skills” and professional development, as well as core math, technology, and literacy fundamentals so that students can be prepared for a variety of industries after receiving their diploma.

“We’re a job training program but we also don’t want to be just a cooking class, where they just come and watch a YouTube video and then cook food and then go home,” said Campos. “There’s so much more that we want to do.”

This year, Campos has spearheaded a move to expand PCKatering, a social enterprise which allows the PCK students to provide catering services to gain more hands-on experience and bring in additional revenue to the program. After a year-long pilot program, Philabundance officially launched PCKatering in August.

Growing the catering business is doubly beneficial, explained Campos. It would both increase revenue to fund the program, valued at approximately $3,500, as well as provide additional training opportunities for students and job opportunities for graduates of the program. 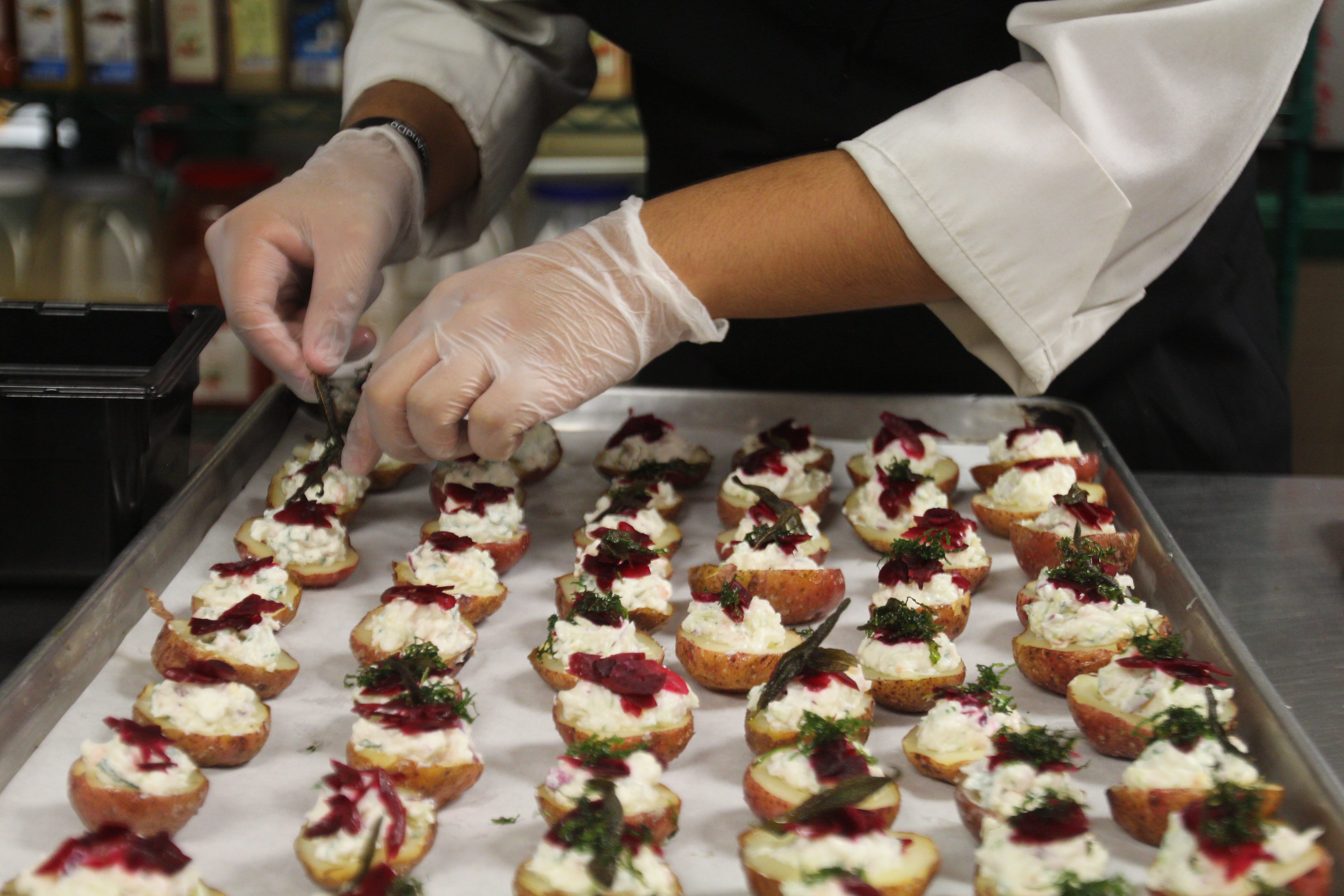 “Moving forward, the goal big picture is to staff it with as many graduates as possible. I want it to be run by PCK with PCK students and grads, and be its own enterprise so to speak,” said Campos, noting that Philabundance’s planned construction of a brand-new PCK campus will be particularly important in furthering the program’s capacity to host more students and expand their catering services.

Ultimately, though, the focus remains on ensuring that all of the students have a holistic experience, said Campos.

“I went to culinary school, and it was very much someone handed me a recipe and said go do it, and you come back and they taste it and they give you some feedback and that was 50 grand in tuition. I want it to be so much more than that for our students,” said Campos.

For Campos, his love affair with the culinary arts started when he was 17 years old. Coming from a working-class background growing up in East LA, where there were “definitely a lot of bad influences,” he “didn’t really have a career path” to follow after graduating from high school.

“When you graduate high school everyone knows they’re going to college, that kind of stuff, I didn’t have any of that. I had no real motivation,” he said.

But then Campos found a part-time job in a diner, and he “fell in love with working in restaurants.” He had mentors who took him aside and helped him along, which eventually led to culinary school, working upwards in his career, and gaining experience.

Eventually, though, the lifestyle caught up with him, and he was “burned out” by the time he moved to Seattle in his 30s.

“Starting at 17 and doing it for close to almost 15 years,” Campos reflected in the PCK classroom one morning in August. “The lifestyle is busy, you get burned out really fast. It’s a tough life. It’s a lot of work until two in the morning, go out, drink, smoke packs of cigarettes, wake up, rinse, and repeat.”

So Campos decided to take his skills in a new direction. He started working with an organization in Seattle called FareStart that does culinary training similar to PCK’s program. Once again, he said, he “fell in love.”

“I love the full circle part of it. Someone took me when I was 17 years old and I learned a lot of what it takes to be an adult through working in the industry: how to balance finance, deal with things — a lot of the stuff that we teach here,” Campos said, explaining that he valued the opportunity to be able to do the same as a mentor for others. 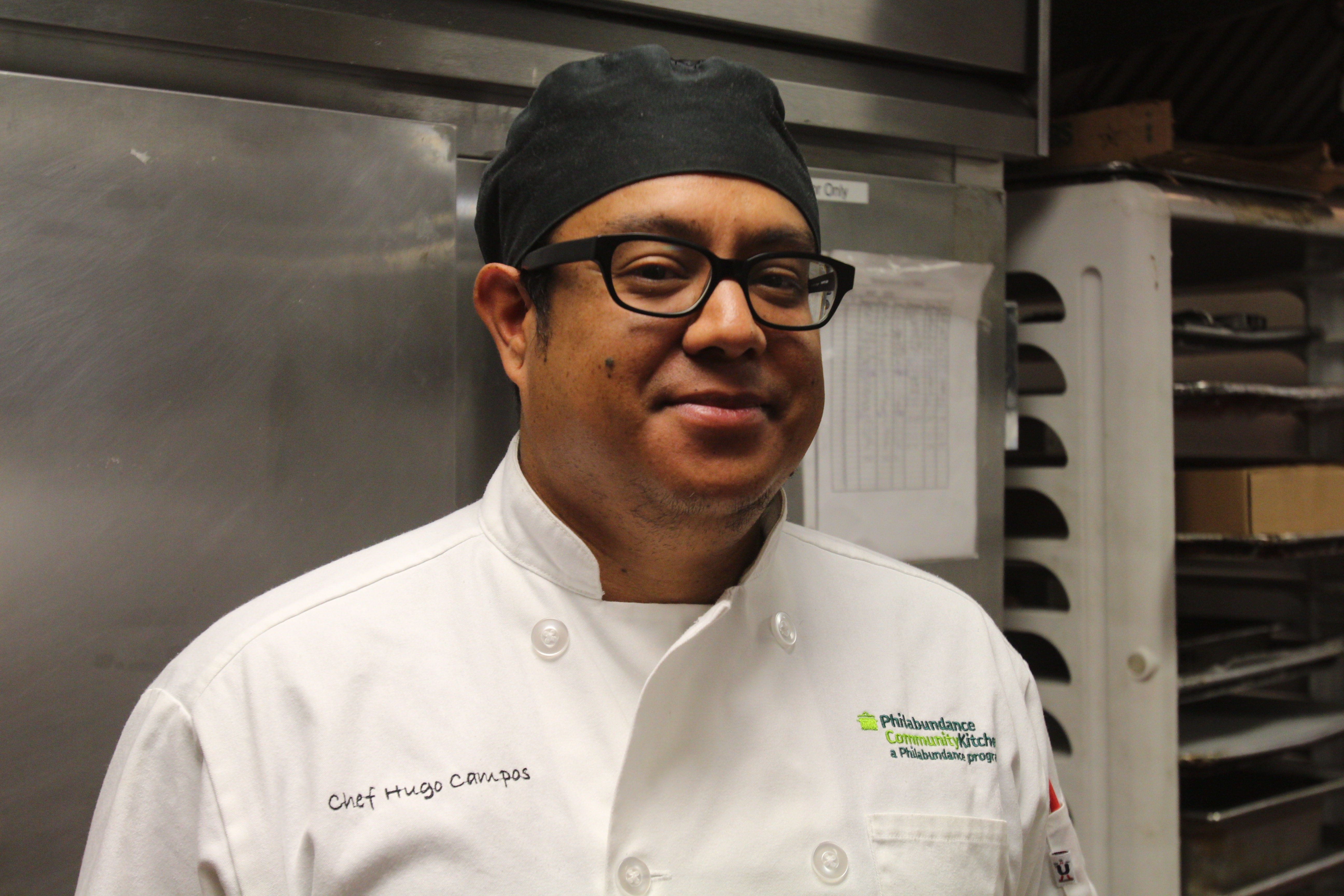 His desire to find similar work when he moved to the East Coast led him to Philabundance’s PCK program in 2015. Since joining, he has moved up from chef instructor to catering chef of PCKatering and Philabundance. In that time, Campos has seen firsthand the program's impact “beyond cooking” for students — many of whom are formerly incarcerated, or are coming from challenging life circumstances.

“And then on the flip side, we have a lot of people who come here, looking for a second chance, so to speak. Or just another opportunity,” he added.

Bandjar Jalosjos is a current student who says he is grateful for that “second chance.” While kneading dough, he described how the program has helped him move forward since he enrolled after hearing about the program while participating in the Philly RISE program for formerly incarcerated individuals.

“It’s a great opportunity...They really take it seriously here with the stuff that they teach us, not just in the kitchen but in the classroom as well,” Jalosjos said. 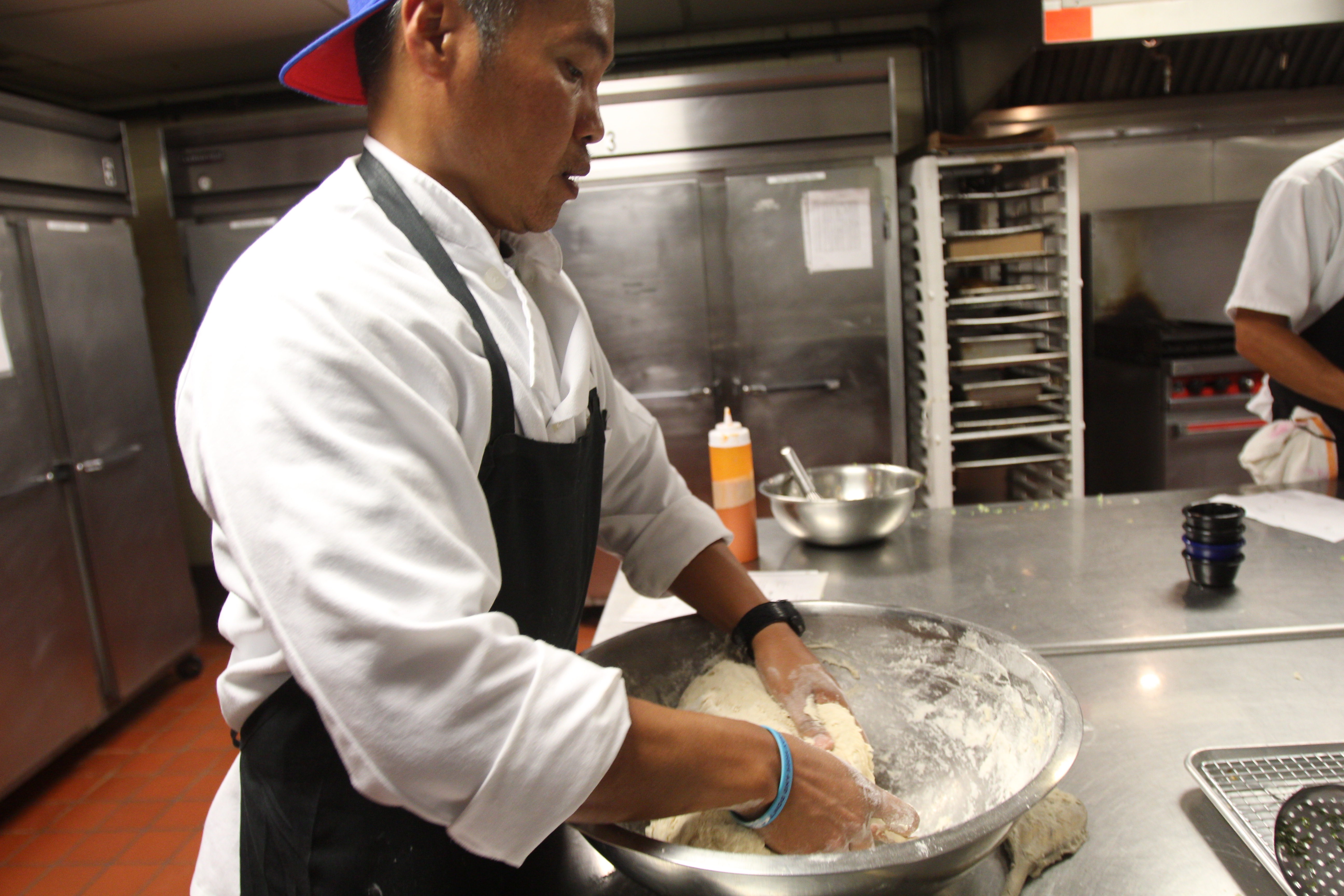 Like some of the graduates of the three-month-long program, Jalosjos said that he plans to enter the restaurant industry afterward. He is confident that after enduring the program’s various grades, quizzes, and midterms, his cooking skills, which had before only extended to making toast and putting rice in the rice-cooker, will be ready to put into action making complicated dishes on the line.

Campos said that having come from a similar place of being lost at some point in his career has helped him to be able to connect with the students — many of whom stay in touch with him long after they graduate the program through social media or email, asking for recipe support or advice on rates and business operations.

“I think one of the best ways to teach somebody is to walk in their shoes,” said Campos, noting that though he hasn’t ever been incarcerated, or experienced some of the other things that his students have, he is able to “relate to the struggle.”

“Just being able to be open and be vulnerable with them, and explain that, ‘Hey, I was down and out, and here’s my experience of going through that,’ I think you connect with them on a different level,” he said.

Taming Hunger: How Philadelphians can survive in food deserts