With the help of his family and friends, Hector Serrano’s Boricua is thriving, with a second location on the way.

Puerto Rican cuisine is commonplace in North Philly neighborhoods like Kensington, Hunting Park, and Fairhill. However, in old neighborhoods that were once home to large Puerto Rican populations like Northern Liberties — an area on the border of North Philadelphia now known for its pubs, breweries, and cafes catering to young professionals — Puerto Rican food is hard to find.

That was, until Hector Serrano moved into the neighborhood as the owner of Boricua, a new restaurant serving everything Puerto Rican cuisine has to offer.

Serrano saw the lack of representation and now runs a thriving family business changing that reality in Northern Liberties.

His family also stood beside him along the whole journey to opening his own spot, even when it wasn’t supposed to be a Puerto Rican restaurant. 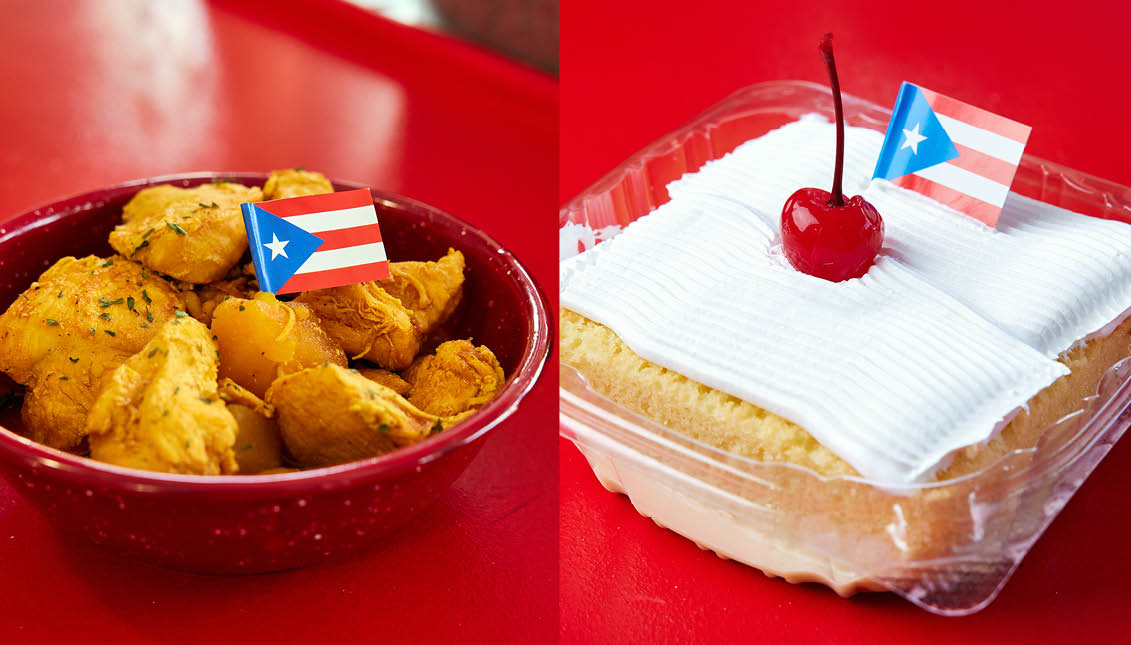 Serrano grew up on 19th and Wallace streets in Fairmount, an area considered the original Puerto Rican Barrio in Philadelphia.

He grew up with the smells and memories of his mother frying chuletas, stewing habichuelas infused with sofrito and spices, and roasting pernil in the kitchen.

His parents, who were born and raised in Arecibo and San Lorenzo, brought their love of cooking and family recipes when they came to the mainland.

By the time Serrano was four years old, his mother, Iris, enrolled him in a preschool that held supervised cooking classes from time to time.

It was there the teachers taught Serrano how to cook basic dishes, like scrambled eggs. Soon, Serrano’s mother brought similar cooking classes home for her son.

“Long story short, my mom said: ‘Well if they can teach you how to cook, I’m his mom, I’m even more careful,’ so my mother taught me how to cook,” Serrano told AL DÍA News.

That’s when Serrano’s mother started teaching him the basics of Puerto Rican cooking, starting with rice and beans. She also emphasized to him and his sister, Jazmin, the importance of being independent.

“My mom always had this saying: ‘You never know when you’ll have your first breath, so you have to be very independent,’” Serrano said. “Before we graduated middle school, we knew how to write checks and money orders.”

Eventually, the instilled independence would be a key tool Serrano needed for future endeavors. 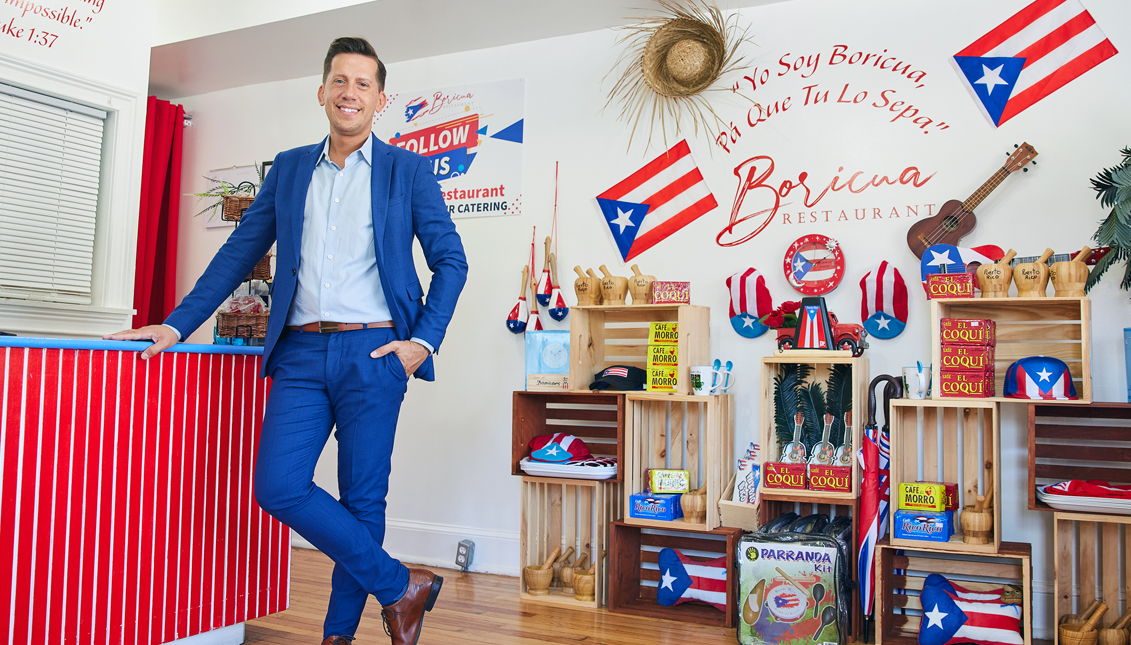 Opened in Northern Liberties amid the pandemic, the Puerto Rican spot has seen major success in the neighborhood.  Harrison Brink/AL DÍA News
A trip to Puerto Rico

Opening a restaurant wasn’t necessarily in the cards for Serrano, however, after he graduated from Philadelphia’s Latino Leadership Institute, he found himself more in tune with his culture.

The institute was founded on the basis of protecting Latinos and educating them about their culture and history.

Part of the program took Serrano to Puerto Rico for the first time, where he was in awe of its culture and customs.

“They showed us a lot of our history, like where the bomba came from, salsa, and the food. I didn’t even know that every single pueblo had its own mayor and its own flag,” he said.

The knowledge stayed with Serrano, and when he came back to Philly, he opened his own ballroom, called the Pearl Ballroom on 9th and Luzerne streets in Hunting Park.

It wasn’t until a comment from a customer about how delicious the roast pork (pernil) was that Serrano even considered a future in food.

“The customer said, ‘My husband is making me feel so embarrassed because this is his third plate, and I don’t want you to think that I’m hungry, he said this is the first time that we went to a place where the pernil is better than mine,’” he said.

The customer also told Serrano he was limiting his growth as a ballroom that opened only on Saturdays.

This comment struck a nerve for Serrano, who often thought about the catering business he ran with his family and how busy they were from working out of a modest kitchen.

Serrano thought about how he could serve his family recipes to his community, but wanted to make sure the location was in an area of Philly that had no authentic Puerto Rican restaurants.

Serrano had to choose between two potential locations: Center City or Northern Liberties. 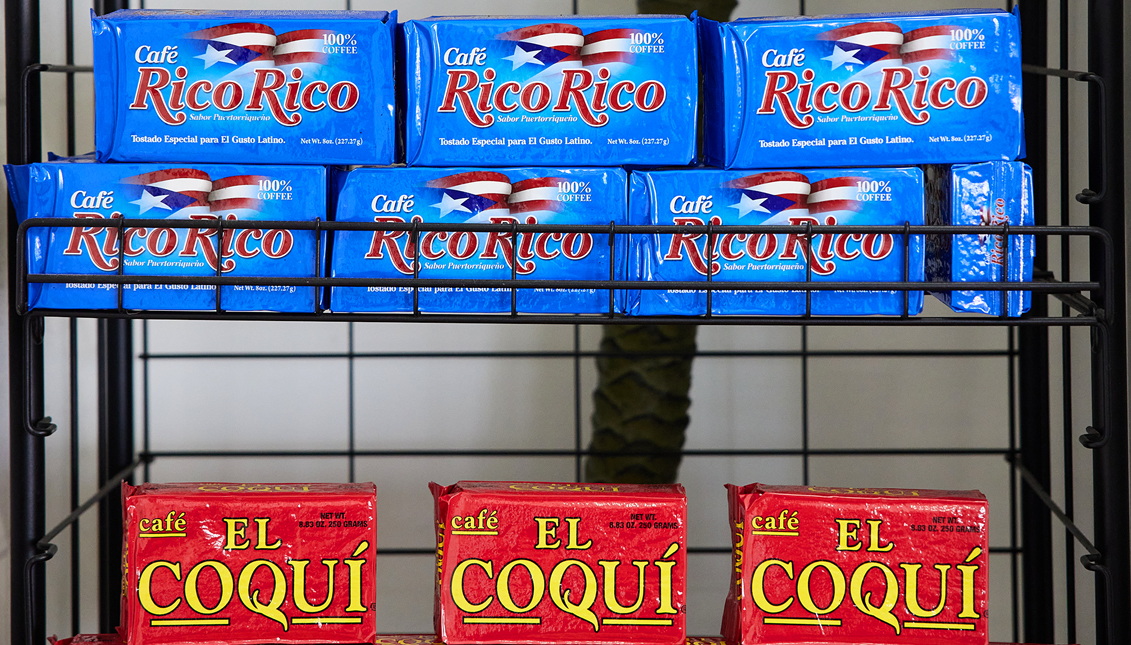 In addition to a menu reflecting Puerto Rican tradition, there are also other vitals for sale in the restaurant.   Harrison Brink/AL DÍA News
The reality of opening a restaurant

Eventually, he chose Northern Liberties, where his apartment was located. He found a space on 3rd and Cambridge Street, a block away from Girard.

It wasn’t easy opening a restaurant in an area known for its cafes, edgy lofts and upscale gastropubs, however, Serrano was determined to open something monumental to make him a household name for Latino entrepreneurs in Philadelphia.

He had praise from his friends and family, but non-Latinos in the neighborhood doubted him and his venture at first.

“It was hard,” said Serrano. “When we first opened, a few outsiders, non-Latinos kept on telling me, ‘You sure you want to open up a Puerto Rican spot? It’s not going to be successful.’”

The comments made Serrano second guess his process, but he eventually overcame his hesitancy and used all the money he had to open Boricua.

“I put all of my eggs in one basket,” he said. “It was crazy, I put everything into it, I wiped out my entire savings.”

It looked like an even more insane gamble as 2020 progressed. Just as Serrano was planning Boricua’s grand opening, the COVID-19 pandemic hit Philadelphia and the government closed down all non-essential businesses.

Serrano had to reschedule the grand opening.

“We actually lost business for three months because we were supposed to open March 13, the same week as the city closed,” he said.

Three months later, Boricua opened, and Serrano remembers only having $128 in his bank account.

The uncertainty was at an all-time high, but Serrano became an overnight success on Boricua’s first day.

Posts on his social media accounts, such as Instagram, show lines wrapped around the building and customers showing off his family recipes.

Serrano’s family all take turns cooking and depending on what dish is being cooked, it could take hours.

For example escabeche, a popular Puerto Rican side dish consisting of green bananas, chicken gizzards, sauteed onions, and olives, could take up to eight hours to achieve the perfect flavor.

“You have to boil the chicken gizzards, you have to rip the skin, and boil the guineos,” he said.

The seasoning is also paramount.

However, the star of the show is still their pernil.

“We’ve been to so many places and we’ve tasted pernil, and it’s sometimes dry or overcooked,” Serrano said. “We wanted it where the pernil is nice and tender and juicy.”

The pernil is delicious, whether it’s on a roll, or with their family’s famous potato salad on the side, and the right amount of ingredients is the most important part.

But no one outside of Serrano’s family knows the recipe or method to slow-cooking the perfect pork.

Another dish prepared by Serrano’s brother-in-law Frank, is the seafood salad.

“When we added the seafood salad it was a blessing from God, it was another hit,” he said.

Unsurprisingly, that recipe is also off limits.

“But I can tell you a few basic ingredients, like crabmeat, shrimp, peppers, and some seasonings,” said Serrano. 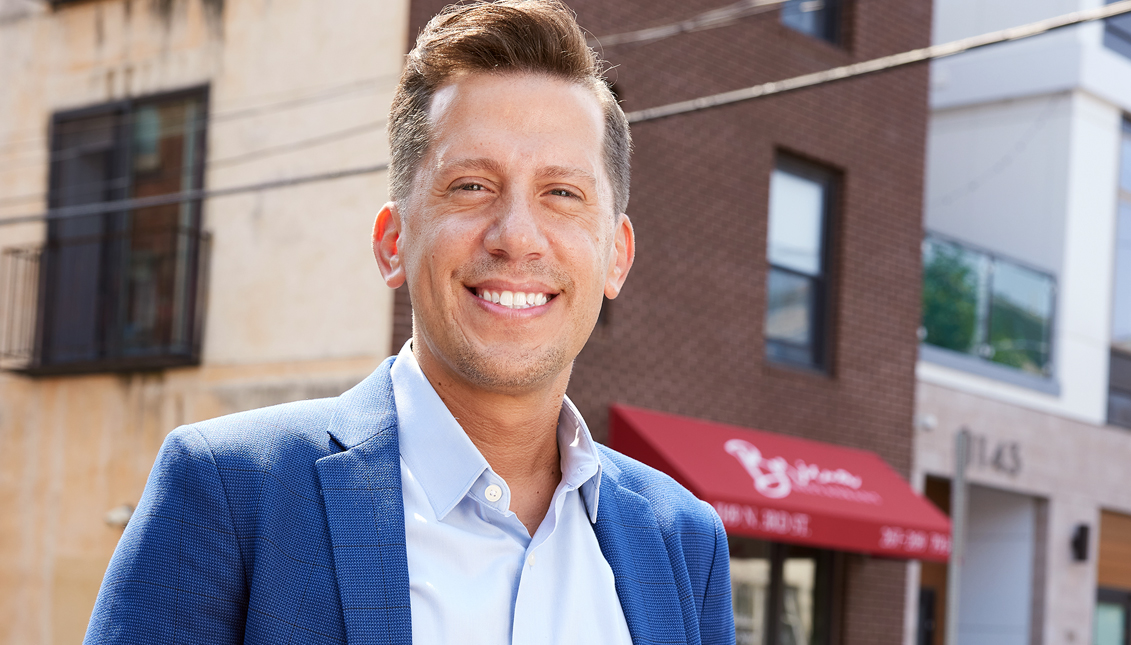 The success of the initial Boricua location has allowed Serrano to make plans for opening a second location.   Harrison Brink/AL DÍA News
Boricua #2

Despite the doubters, Serrano’s business is truly thriving, and he’s made a name for himself as an upward-thinking entrepreneur.

Serrano has other business ventures in the process, including the opening of Boricua #2.

“We will be opening a second location, the second restaurant will be on the main street, como de dice donde esta la Boricua on 5th street,” he said.

The second store is slated to open before Thanksgiving and will fit around 250 people for indoor dining. It will also feature salsa music, and a menu with a lot of fritura (deep-fried food).

“We’re gonna have cookies, pastries and danishes, it’s going to be a lot,” said Serrano

Another dish that has a bad rep, but is a true Puerto Rican staple is morcilla — a Spanish-style blood sausage eaten in Latin America.

Morcilla has many different variants, however the most common is made with rice, pig’s blood, garlic, and spices.

Much like Serrano’s first restaurant, his second location will have the look and ambiance of Puerto Rico with everything from the music, to the staff’s attire under consideration.

“I want our staff to wear guayaberas, I want it to be fun, I want them to have an experience and where they could take their parents to dinner for Mother’s and Father’s Day,” Serrano said.

Beyond Boricua #2, he also hopes to one day open a third space in Center City.

“We have a few realtors and a few people, even people who want to go into business with us because they’ve seen the success, they want to open a restaurant with us,” he said.

At the end of the day, Serrano achieved something he never thought possible.

“I would never in a million years think that a Puerto Rican boy from 19th and Wallace would have a Puerto Rican restaurant in a Caucasian neighborhood like Northern Liberties, where he would be selling coquito bottles on delivery services,” he said.

Puerto Rican cuisine is the heart and soul of its culture. The smells and ingredients are from its African, European, and Native American ancestors.

Whether classic staples such as arroz con gandules, or authentic dishes like mofongo, Serrano’s family dishes are worth every potential customers’ time.