How Chef Reeky, owner of Cheezy Vegan found his passion for the culinary arts while incarcerated

The most popular dishes at Cheezy Vegan is the McReeky Sandwich and Mac and Cheese. Photo: Cheezy Vegan.

How Chef Reeky, owner of Cheezy Vegan found his passion for the culinary arts while incarcerated

He opened his second restaurant in the middle of the COVID-19 pandemic.

As of 2021, veganism has made its way into the hearts of many Philly residents.

Whether it's for health reasons or ethical concerns, more and more people are indulging with vegan food for a better alternative to traditional food staples.

Chef Reeky, the owner of Cheezy Vegan in Delaware County and Chef Reeky’s Café & Juice bar in Southwest Philly, wanted to get into the vegan food scene because of its growing popularity.

Reeky opened his second space, Cheezy Vegan, in the middle of the COVID-19 pandemic, in November 2020. “I was a little bit apprehensive at the beginning, but the only thing that kept me grounded was that the previous restaurant that I had before it already had a vegan following,” Reeky said in a recent interview with AL DÍA News.

Despite being a little concerned about opening such a niche restaurant in the middle of a global pandemic, he knew that displaying the unique dishes was his true calling.

The way that he entered the food scene was not in your typical fashion.

“I started cooking in the penitentiary, I was 19 years-old and when I was sentenced, the jail was overpopulated,” he said. “In order for me not to be in my thoughts so much, I ended up working in the kitchen.”

Initially, Chef Reeky didn't really have a passion for cooking, but he found it when he was assigned as a kettle cook.

Three months later, he was the go-to guy in the kitchen.

Reeky absorbed all of the information and was able to graduate from the program and later earned a culinary degree.

After graduation, Reeky opened his own business. He went on to open another space that focused on healthy juices for locals.

Ever since he’s opened Cheezy Vegan, he has been thinking of what his next move will be.

“I am embarking on another restaurant this summer in South Philly,” he said.

So far, Reeky is in the process of setting up a new shop on 17th and Federal streets.

The store will showcase all natural juices, cocktail drinks and other delectable vegan options.

“I also would like to have a vegan food truck and highlight more plant-based alternatives,” said Reeky.

Of course, he will also have his famous (vegan) mac and cheese on display once he gets said food truck.

In fact, his mac and cheese has been the hot selling item at his restaurant in Delaware County.

“I would say that this is the most popular dish on the menu,” he said.

“It's mac and cheese with our homemade goulash right on top of it,” he said. 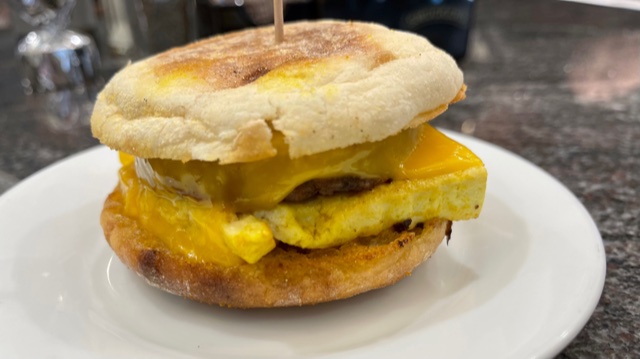 Another fan favorite is Reeky’s spin on an all-american classic called McMuffin from McDonalds.

He calls it  The McReeky.

“The sandwich is definitely a flagship for the restaurant,” he said.

Check out Cheezy Vegan on 604 Fairview Rd in Woodlyn, PA.

Small and midsize business leaders are confident heading into 2022