The Hispanic population growth in the country is not only a trend anymore.  What the results of the last census mean.

The United States is not a homogeneous country. It never has been. At its origin is the fruit of migrations and today, 245 years after its founding, it continues to be and evolves thanks to migrations.

Hispanics, Latinos, Latinx, we all come from different places and our origins are so rooted in the culture of the continent that it is impossible to deny they are also rooted in North America.

The 2020 census, of which we don't know all the data yet, is the best evidence to date of what was already sensed. The United States of the 21st century is a melting pot of cultures, not only European or African, but also Latin American and Asian from all latitudes. And among these, the weight of Hispanic culture is increasingly evident and irreversible.

The figures revealed by the census are overwhelming. Of 331 million Americans, 63.7 million consider themselves Hispanic. One in four Americans consider themselves Hispanic or Asian. In other words, more than 25% of the population identifies their origin outside the United States. In addition, the Hispanic population increased in the last decade by 23%, only surpassed by Asians, who increased by 41%.

The Latino influence has even reached places as "white" as the Dakotas. In North Dakota the Hispanic population increased 148% between 2010 and 2020, while in South Dakota, it increased 75%.

Latinos represent 39% of the population in California and Texas, and 26% in Florida — a trend that continues in the South of the country and has remained stable since the Hispanic population in the country began to be counted in 1980.

But what about the Hispanic population in other regions of the country?

The census data is thorough and divided by regions, states, counties, and curious enough can even know the origin of Hispanics in each of the regions.

In this way, we know, for example, that in Philadelphia, 15.6% of the population is Hispanic. The majority are Puerto Ricans and Dominicans, but in the last two decades, the number of Mexicans and Central Americans has increased.

The same phenomenon in Philadelphia is repeated throughout the Northeast.

In the South, the majority of Latinos identify as of Mexican or Cuban origin — such as in Florida. In the North, the trends are more for the Caribbean islands, Puerto Rico and the Dominican Republic.

However, Mexicans still represent the vast majority of Hispanics in the country, as 37.2 million Hispanics identify as Mexican.

According to Jeffrey Passel, senior demographer at the Pew Research Center, one of the most important findings of this latest census is precisely the mobility of Hispanics from the South to the North of the country and their growth in “white” states. 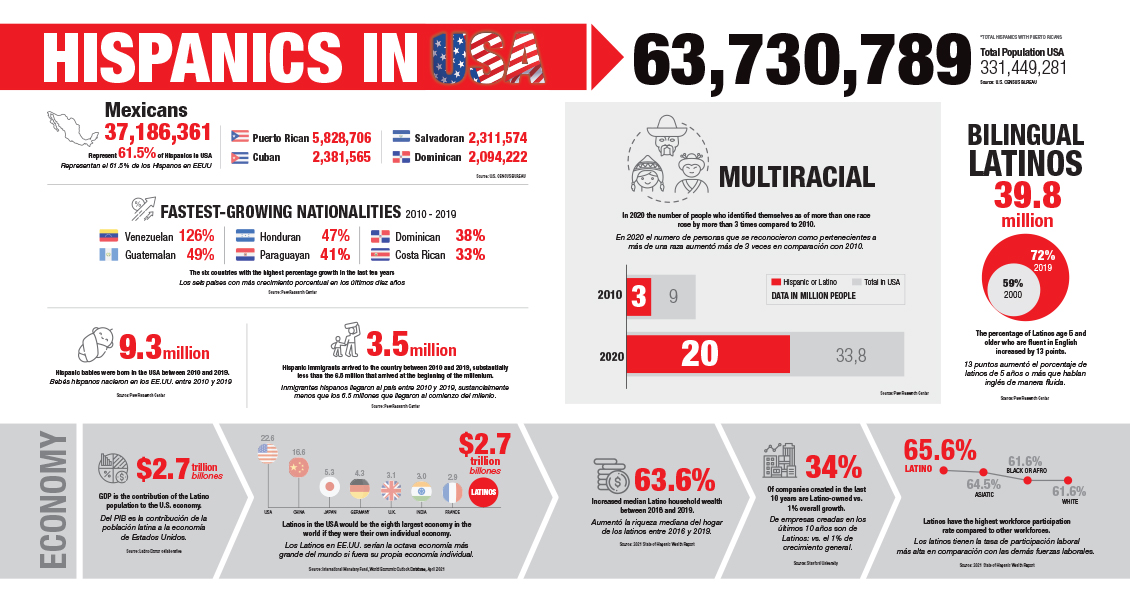 Hispanic, Latino, Latinx are the expressions used to talk about immigrants who come from the countries of Central and South America and from Spain. Brazil was excluded from this category of the census, because despite being Latino, their language is not Spanish.

In 1976, Congress passed a law that allowed the origin of Hispanics to be questioned in a category other than race on the census. In fact, it is the only law that mandates the collection and analysis of data on a specific ethnic group, apart from the category of race.

Thus, in the 1980 census, the specific question about Hispanic origin began to be asked. Even before this mandate, the government has tried to measure the Hispanic population in the country through surveys on the country of origin of people, using surnames, the languages they spoke and more as guides.

The question has changed little in the past 40 years, and although during the administration of President Barack Obama, the Census Bureau suggested joining the two questions about the ethnic origin of Hispanics and race, the Trump administration, which was in charge of the design and preparation of the 2020 census, did not follow through.

However, a change was made to the race question. In 2020, people who identified as white or Black were able to write a description about their origin. This, among other things, caused people who identify as Hispanic within the racial categories to change substantially. That is, they were no longer only Hispanic, but white-Hispanic, Black-Hispanic, or even multiracial.

According to Passel, “the format of the question on race, which allowed and, I would say, even encouraged people to give specific answers within racial categories”, was the cause of the most significant phenomenon in the 2020 census data: 33.8 million people recognized themselves as belonging to more than one race, an increase of more than three times, as 9 million did so in 2010, and only 6.8 million considered themselves of more than one race in 2,000, the first year in which this question was asked.

Among Hispanics, there was also a significant increase, as more than 20 million identified with more than one race in the 2020 census, representing an increase of 17 million in 10 years. 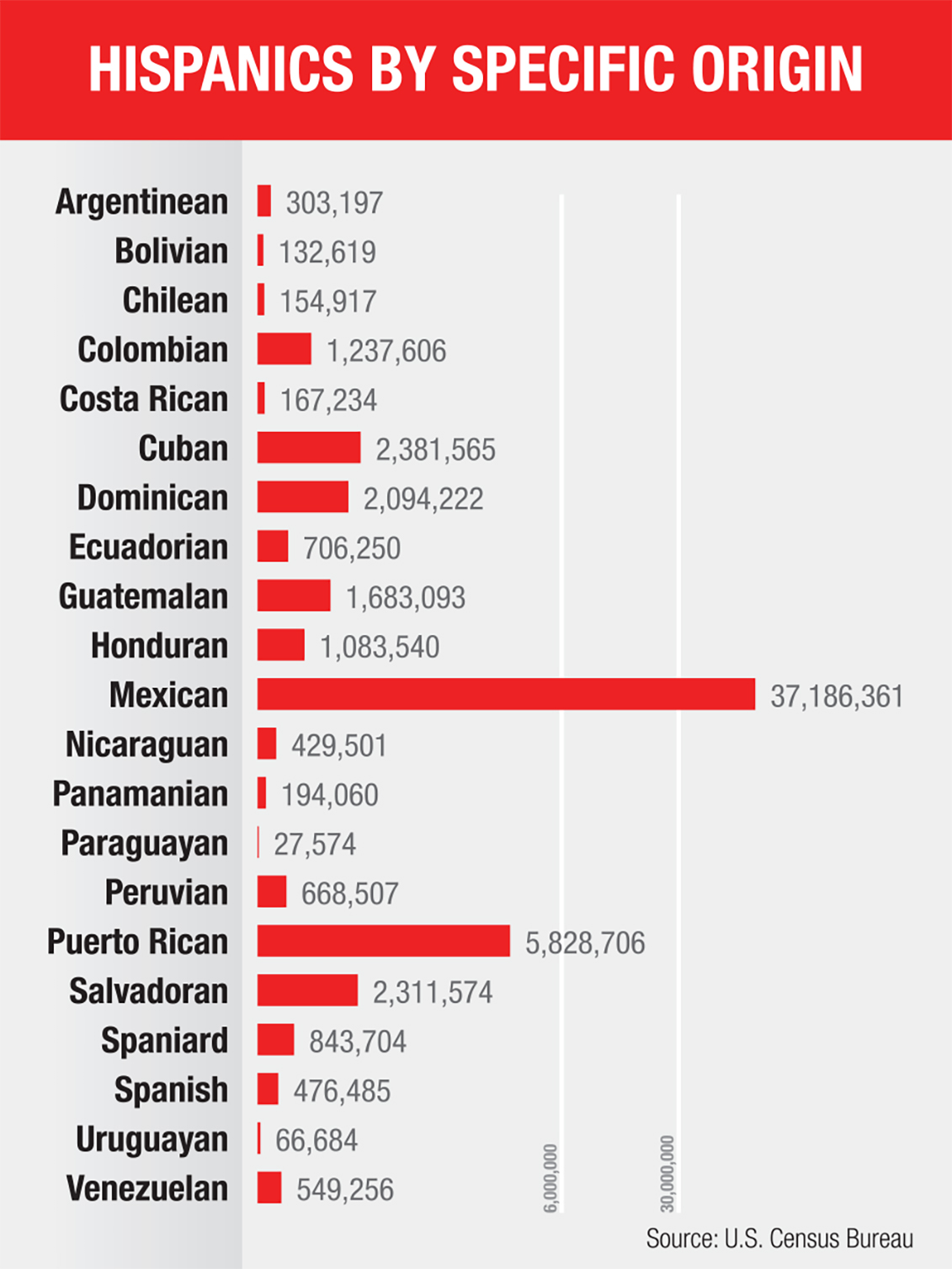 The fact that there are more Hispanic babies born in the country, many of these in multiracial families compared to new immigrants, demonstrates social mobility, as more and more people of different races and ethnicities marry each other, have children who inherit diverse origins, and these children identify with all their ancestors.

This phenomenon also responds to the passage of time. Multiracial babies of two or three decades ago are now young adults and have broader views of their origins. The multiraciality in second or third generation immigrants, which is what is being seen this decade compared to previous censuses, also implies a change in the vision of what it is to be white or multiracial, and how the youngest assume with more naturalness, and even pride, various origins.

Stanford University sociologist Tomás Jiménez told NPR that "older people who grew up in the mid-20th century were taught that Hispanics were white and that there could be a benefit in claiming their whiteness," in contrast , “U.S.-born people now responding to the census have been educated in a time of national anti-immigrant and anti-Latino politics. They are ticking the census boxes with a different sensitivity. "

But being multiracial cuts across other aspects of culture as well. In the last fifty years, for example, Latin music has influenced the culture and the Latin market, from salsa and Latin jazz in New York, pop figures such as Jennifer Lopez or Shakira, Mexican regional so popular in Chicano culture, and reggaeton of the last decade. All these rhythms have brought Latino culture closer to American society.

And while generations listen to music in Spanish and Spanglish, more Hispanics speak English — in 2019, 39.8 million were fluent in English, according to the Pew Research Center. But also, 42.5 million people speak Spanish as natives, 14.9 million have limited language proficiency and 7.8 million are studying Spanish, according to data from the Hispanic Council. 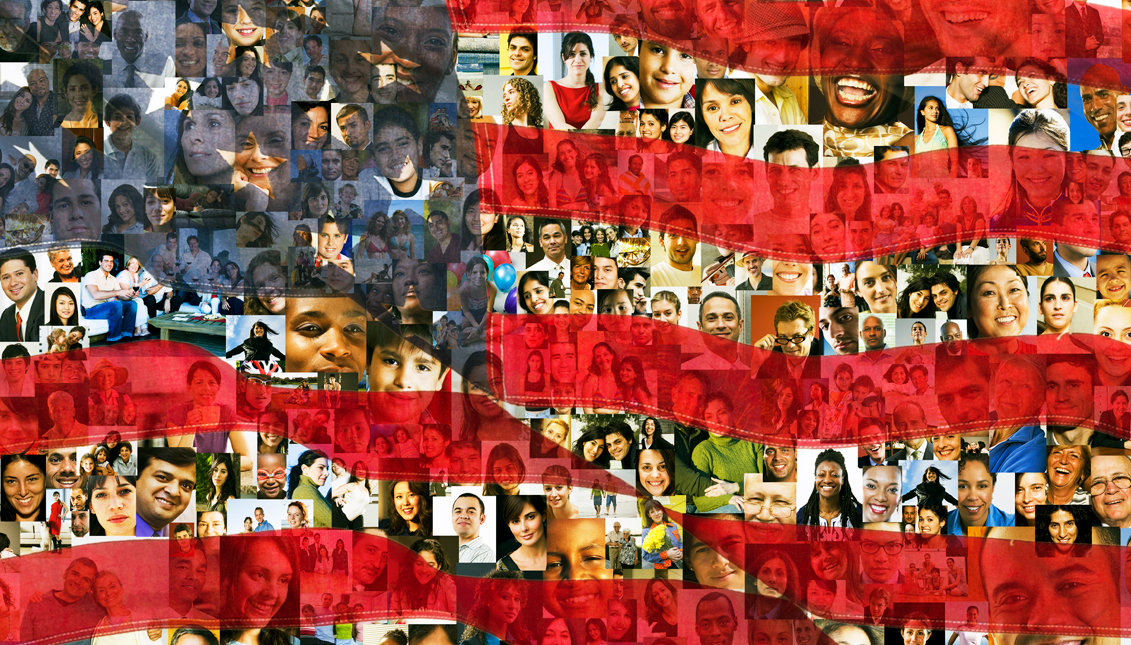 Multiracial babies of two or three decades ago are now young adults and have broader views of their origins.  Gettyimages
Hispanics, generators of wealth

It also doesn’t end there. These generations of Hispanics are taking the lead in new business creation and the job market. Latino startups far exceed those created in recent years by whites. Latinos are the group that has created the most companies in the last 10 years: 34% compared to 1% of general growth, and contribute $2.7 trillion of GDP to the economy of the country. That alone would be the eighth largest economy in the world.

As Janet Murguía, president and CEO of UnidosUS says, "the good news is that most Americans recognize the importance of Latinos and Latinas to our economy and appreciate our work ethic and values. The bad news is that the majority of Americans also believe in widely inaccurate and negative myths and stereotypes -perpetuated by the news and social media -about our size and immigration status that are preventing our country from making the investments and enacting policies that will benefit both our community and our nation."

The path is outlined and the projections are positive. Being multiracial is no longer a dream, it is a reality in which the Latino community has such an important place that it cannot be hidden.

To get AL DÍA Print Edition at the comfort of your home, please click here
TAGS
#2020Census
Latinos
POWER

Latinos or latinx? The debate rages