The Chilean writer and actress, a member of the feminist movement Women for Life, died at her home in La Reina, Chile, on Jan. 3. 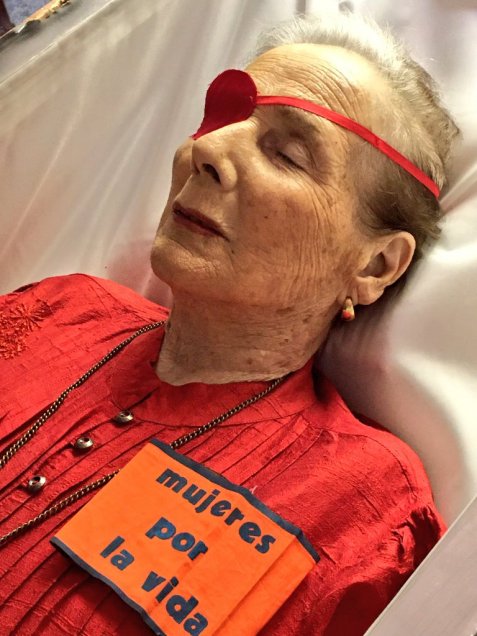 Red as a poppy: red dress, red lips and red the patch with which she was buried.

That's how Monica Echeverria was farewelled on January 5, fulfilling her last wish to be buried with a patch in homage to those who have suffered eye losses during the recent social protests in Chile and a sign on the left side of her chest that reads "mujeres por la vida" (women for life).

Mónica Echeverría was a Spanish teacher, actress, writer and political activist. Perhaps one of her most transcendent actions was to have participated in the Women for Life movement, a feminist collective that during the dictatorship resisted through public and peaceful interventions, where humor played a determining role. A historical precedent of the current collective Las Tesis.

Between 1974 and 1978 she lived in England, in exile, as two of her children were part of the underground resistance against the Pinochet's dictatorship. In 1988, she co-founded the Independents for the No Movement, which brought together people who were not members of political parties, were against the Pinochet dictatorship and promoted the No vote in the historic plebiscite of October 5 of that year. After the No victory, the group was renamed Independents for the Democratic Consensus.

In 1994 she co-founded the Estación Mapocho Cultural Center, the first of its kind after the return of democracy in Chile.

In 2003, in commemoration of the 30th anniversary of the coup d'état that overthrew socialist President Salvador Allende, the radio drama "The Final Epic of Salvador Allende" was presented, of which Echeverría was the author.

In addition, she wrote the novelized biographies "Krassnoff, dragged by his destiny", about Miguel Krassnoff Martchenko, one of the military men who participated in the assault that led to the coup d'état on Allende; “I, Violeta", about the singer Violeta Parra; and "Insatiables", inspired by the life of the dictator Augusto Pinochet.

To get AL DÍA Print Edition at the comfort of your home, please click here
TAGS
Chile
Mónica Echeverría
feminismo

Gaudí's first work outside Spain will be in Chile