Through a series of Clay and Conversation workshops, the nonprofit is inviting community members to participate and give feedback for what they want to see when the Clay Studio opens a new ceramics center in South Kensington in 2020.

Hurricane Maria wiped away half of Pablo Laureano’s apartment in Bayamón, destroyed half of his belongings, and took away his vision of a future for himself and his family, especially his eight-year-old daughter, on the island. So he packed up and moved to Philadelphia six months ago, ultimately finding work in a door-making factory in New York City, which he commutes to from Philadelphia for work every day.

On Thursday of last week, at a “Clay and Conversation” workshop hosted by the Clay Studio at Taller Puertorriqueño, led by local artists Jennie Shanker and Roberto Lugo,  Laureano used the invitation to paint a bowl with a vision of the future to reclaim some of what he had lost in that journey. 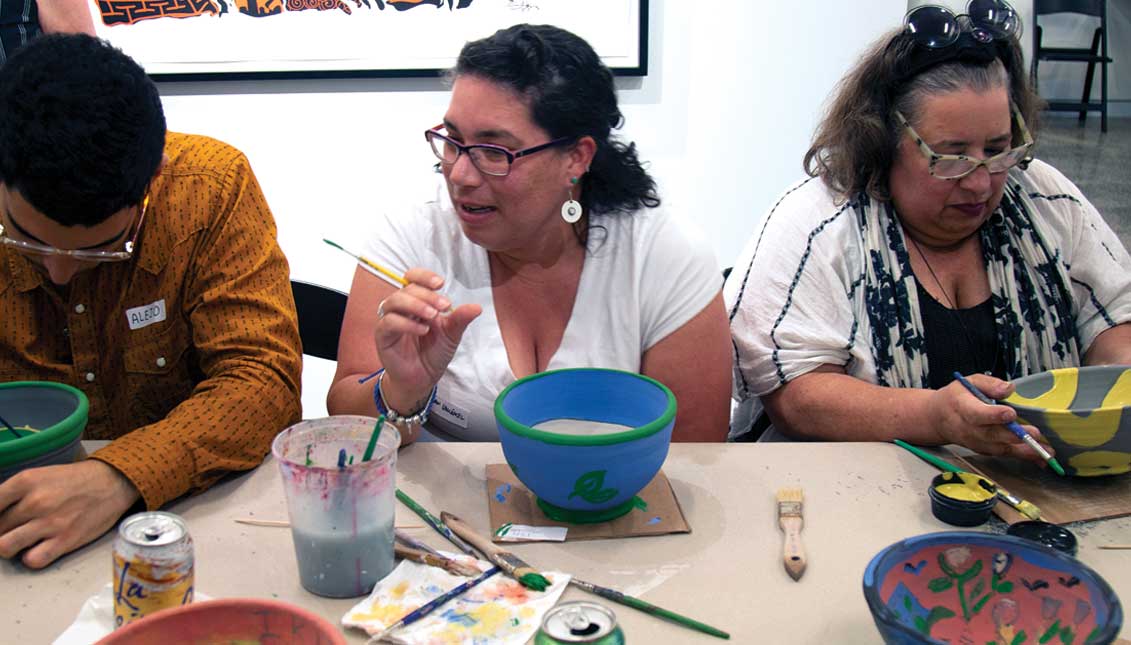 Laureano explained to the about 40 participants gathered there that his vision of the future represented a return to the most joyful parts of his past — perhaps, most importantly, a return to the island, his country, he said, that is his home. On the inside of his bowl he painted a scene of him and his stepfather fishing, a scene which he sculpted in the previous week’s workshop which asked participants to represent a memory that brought them joy and nostalgia.

On the outside of his bowl, was his world here on the mainland - a world composed of dense cities and large buildings. A world where extremes of wealth and poverty exist side by side, said Laureano, as employers pay workers the bare minimum while making double and triple that salary.

Laureano’s story that he expressed through his artwork to the group was one of the many personal stories and community-wide visions shared at the workshop, and indicative of the power that artmaking such as ceramics can have, said artist Jennie Shanker, co-instructor for the Clay and Conversation series, which is funded by the Pew Center for Arts and Humanities. 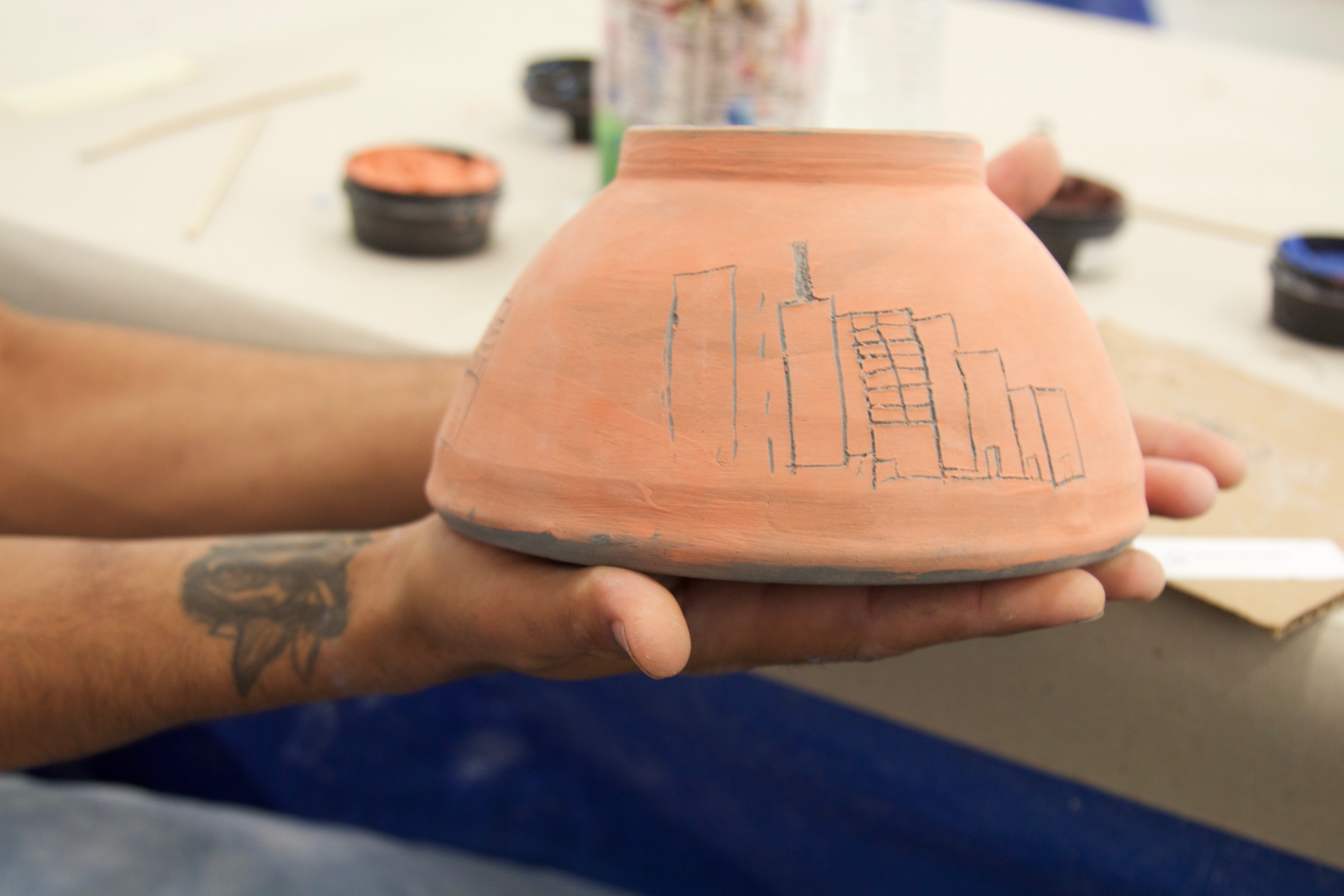 “We’re all telling these stories where we’re really touching each other and that’s made possible through being able to hold some clay and work together on something, and it’s really powerful,” said Shanker.

That sense of community is also what the Clay Studio is hoping to accomplish with the three “Clay and Conversation” workshops they’ve held so far. The over 40-years-old nonprofit will leave its longtime home in Old City in 2020 to open a brand new ceramic arts center at 1425 North American Street in South Kensington — and it’s looking to community members in that neighborhood to help them shape what the center and programming itself will look like.

“We want to come in and be respectful and ask the neighbors to welcome us, and also make sure that once we open our doors, they feel welcome to come in, feel agency of the space and feel like it’s really their space as well,”  said Jennifer Zwilling, curator of artistic programs at the Clay Studio.

In addition to a plan to amp up teen programming, Zwilling said that their hope is that they can build around the ideas and feedback that comes out of the Clay and Conversation sessions.

“These programs are literally where we’re asking people, so we’re not sure exactly what we’re going to do because we want to ask the community what they need, or what they would like to see from us,” explained Zwilling.

Artists Jennie Shanker and Roberto Lugo, both artists and professors at Tyler College of Art, are the instructors for the four workshops. Lugo, a local artist born in Kensington to Puerto Rican parents, currently has an exhibition of his own work on display at Taller Puertorriqueno, in an exhibit entitled “Boricua, Barrio, Barro,” up through Oct. 27.

“I think it’s so important to acknowledge arts organizations that are bringing it to communities like ours, communities of people of color, and not just keeping it in places where people are privileged,” said Lugo to participants at the end of the workshop, most of whom had attended the two previous sessions, Zwilling noted. 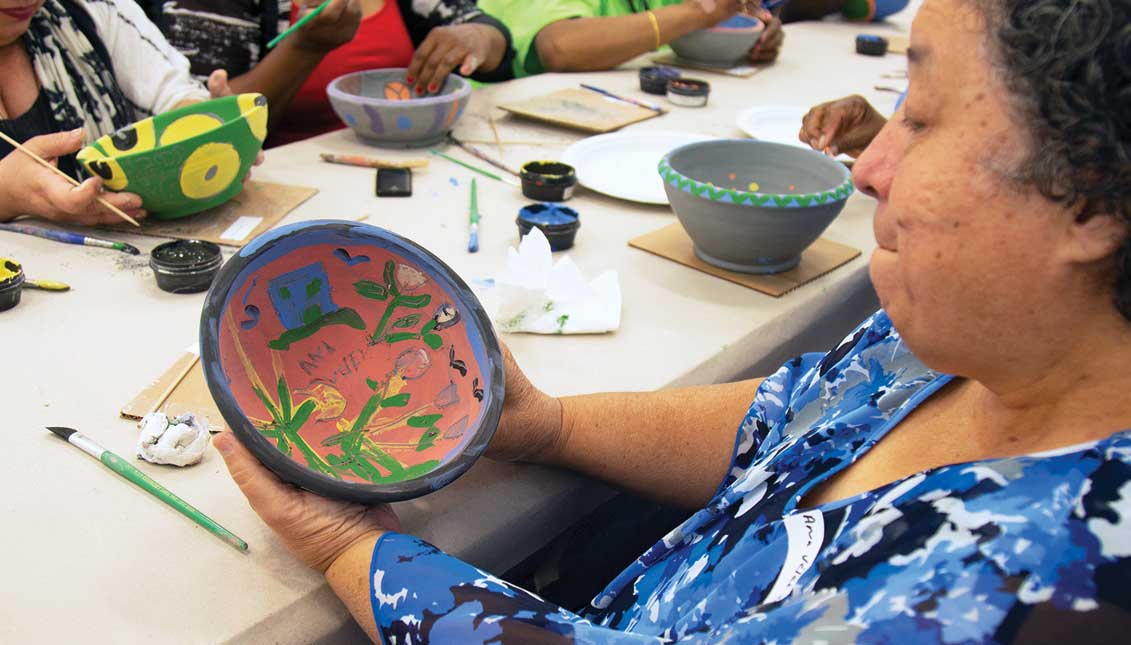 Ana Velez, a longtime resident of the neighborhood who first arrived there from Puerto Rico in 1985, said the workshops “have helped a lot.”

“I have kidney disease, so this helps you think that you’re not sick and that you have an art,” said Velez, whose bowl, which she painted in flowers and a small house, depicted her love for nature and the importance of cultivating gardens and flowers in the community.

Shanker said that clay is a powerful and accessible medium for most people.

“It’s not like you’re giving somebody a blank canvas and you’re telling them to make a self-portrait where the first thing they’re going to think is I can’t do it. It’s something where you’re putting something in their hands and they immediately want to do something, and no matter what their skill level they actually can do something. I think that’s one of the beautiful things about clay,” she said, noting that the Clay Studio will be able to reach more people and have a greater impact in the new location in South Kensington.

The final Clay and Conversation workshop will be held this Saturday at Al-Aqsa Islamic Center at 1501 N Germantown Avenue from 1 - 5 p.m. If you’re interested in attending you can go to www.claystudio.org for more information.