Paola Ramos (born 1987) is an American journalist. Ramos is a correspondent for Vice and is a contributor to Telemundo and MSNBC. Ramos’ work focuses primarily on Latino issues.   Miguel Fernández-Flores/VICE News/SHOWTIME

The Darien Gap is a natural and extremely dangerous barrier that divides the route between Colombia and Panama.

The jungle that separates Colombia from Panama, known as the Darien Gap, is one of the most dangerous routes in Latin America. Thousands of migrants from all over the world try to cross it every day with only one goal in mind: to reach the United States.

It is a journey of more than a week without shelter, water, or food, crossing 575,000 hectares of virgin and unforgiving nature, at the mercy of high temperatures or torrential rains, mosquitoes, snakes, and jaguars.

Yet, there is a danger that is even more life-threatening: the gangs of organized crime that control El Darién, like “El Clan del Golfo” from Colombia, the most powerful and largest drug cartel in the country. On the Panamanian side, entire families dodge the corpses they find in their path, at the risk of ending up with a similar fate.

“It goes far beyond snakes and scorpions. No one can pass through the Colombian side of the Darién without being approved by the Clan del Golfo, and the same routes they use to traffic cocaine are used to cross migrants,” Vice journalist Paola Ramos told AL DÍA. “However, for the coyotes, it is a business and one of the most interesting things they tell you is that they see this human trafficking as a humanitarian act.”

The worst part of the journey does not take place in Colombia, but in Panamanian territory.

“The Gulf Clan does not even dare to enter Panama because it is so dangerous and because of the numerous armed groups that control it. This is where the migrants start to see dead bodies and to be massacred, and where most of the sexual attacks take place”, she said. 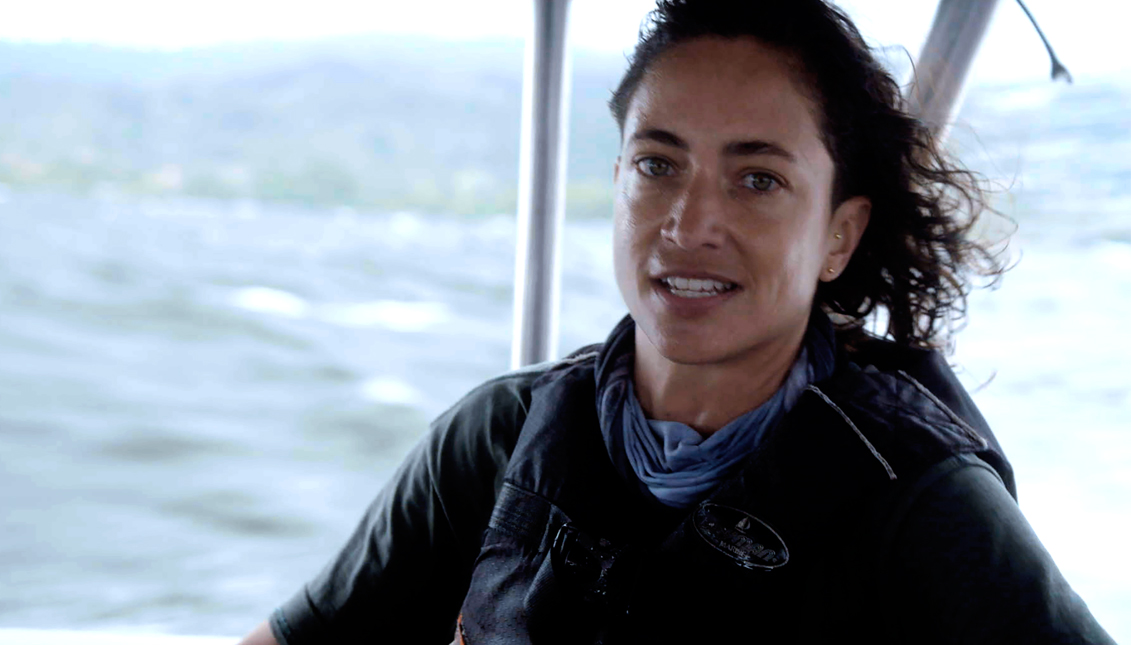 Ramos served in the Obama administration, including working for both President Barack Obama and Vice President Joe Biden and served as Deputy Director of Hispanic Media for the Hillary Clinton 2016 presidential campaign.    Srdjan Stojiljkovic/VICE News/SHOWTIME
An eye-opening adventure

Ramos and her team accompanied a caravan of migrants heading to Panama for seven hours, on a journey that would take them seven to eight days. An odyssey that is part of the second season of Vice’s award-winning docuseries and in which the reporter had the opportunity to experience first-hand one of the largest and, above all, most diverse and dangerous exoduses to the United States, which since Joe Biden’s inauguration has grown to Obama-era numbers.

“The idea is for people to understand that the images that we’re seeing in Mexico, on the southern border, are happening thousands and thousands of miles away. What you see in that jungle is what we see at the border: families who are literally carrying their children through this jungle,” Ramos said. Citing Unicef, she adds that in the last 4 years the influx of minors has increased 15 times; in 2019 there were 4,000 children and teenagers who entered this green hell.

“What is most impressive is to see the boats arrive loaded with mothers and their children, and then, when we accompany them through the jungle, to hear the babies crying in the silence or complaining because they were thirsty, hungry, or didn’t know where they were,” she said.

Twenty-four thousand people of more than 50 nationalities crossed El Darién in 2019, including Cubans and Haitians, Venezuelans, Brazilians, and migrants arriving from the most remote countries in Africa and Asia, such as Somalia, Cameroon, or Bangladesh. Around 16% were minors and some of them unaccompanied.

According to Panama’s National Border Service (Senafront), at the beginning of last year, this figure was seven times higher, since the statistics leave out those who did not manage to survive. 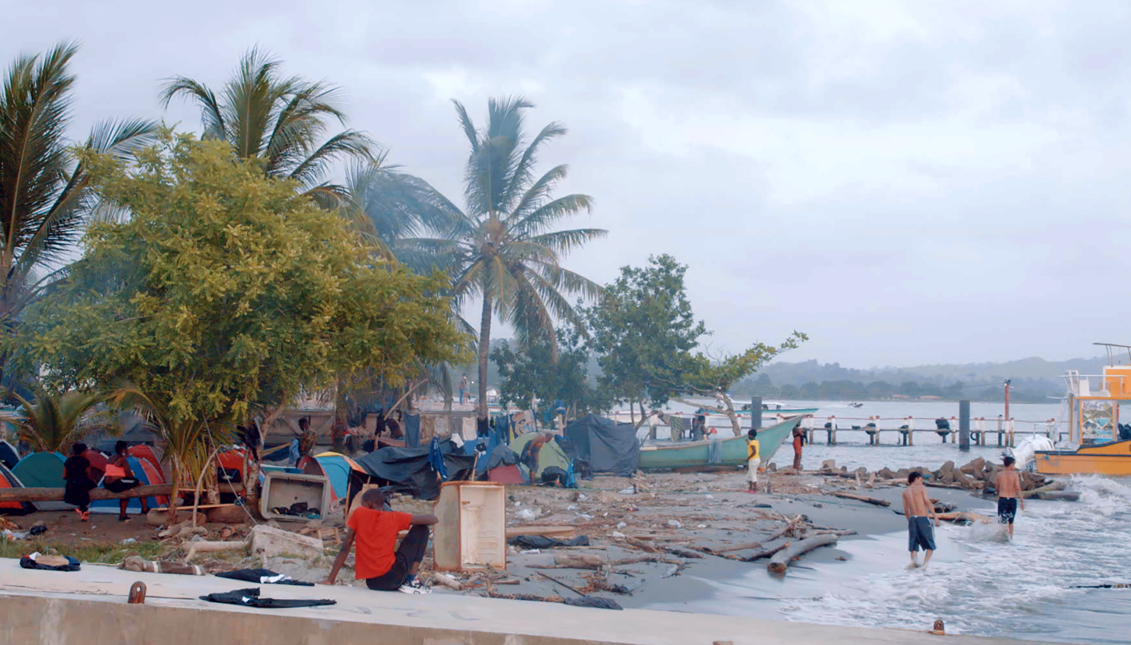 The Darién Gap is a break across the North and South American continents within Central America, consisting of a large watershed, forest, and mountains in the northern portion of Colombia’s Chocó Department and Panama’s Darién Province.  Srdjan Stojiljkovic/VICE News/SHOWTIME
The “Other” immigration

The migration phenomenon in El Darién is not recent but remains unknown. Especially, said Ramos, because whenever immigration is discussed, the focus is always on the border with Mexico, but rarely on where it begins.

“We talked to authorities in Panama and there is this idea that migration is a crisis but it is not very much implicated in policy. No one is talking about what is happening in El Darién. But we know that many of the migrants who cross the jungle are going to end up at the border with the United States and will be part of the 170,000 people who arrived in the country in March”, she said.

For Ramos, one of the fundamental problems is the continued existence in the United States of the so-called Title 42, which denies the right to seek asylum in the country and which contrasts with President Biden’s promise to restore human dignity in an immigration system that has become a breeding ground for cages and deportations in the Donald Trump era.

But what happens in El Darién also offers another, much broader and less stereotypical face of immigration, which Ramos tries to show and reflect in each of her stories.

“When we think of immigration in this country, we do so from a very Central American perspective and from the perspective of the lighter-skinned migrant. But what we see in El Darién are black migrants and this diversity is being lost sight of,” she said.

In fact, another of the clichés about migration that the report —and by extension, Ramos’s other works— challenges is that all migrants who try to cross the border, beset by a thousand dangers, are people from very poor origins. She does this by giving the example of a Cuban nurse who embarked on the perilous adventure pregnant, or the dozens of Cuban medical professionals she has interviewed over the years. 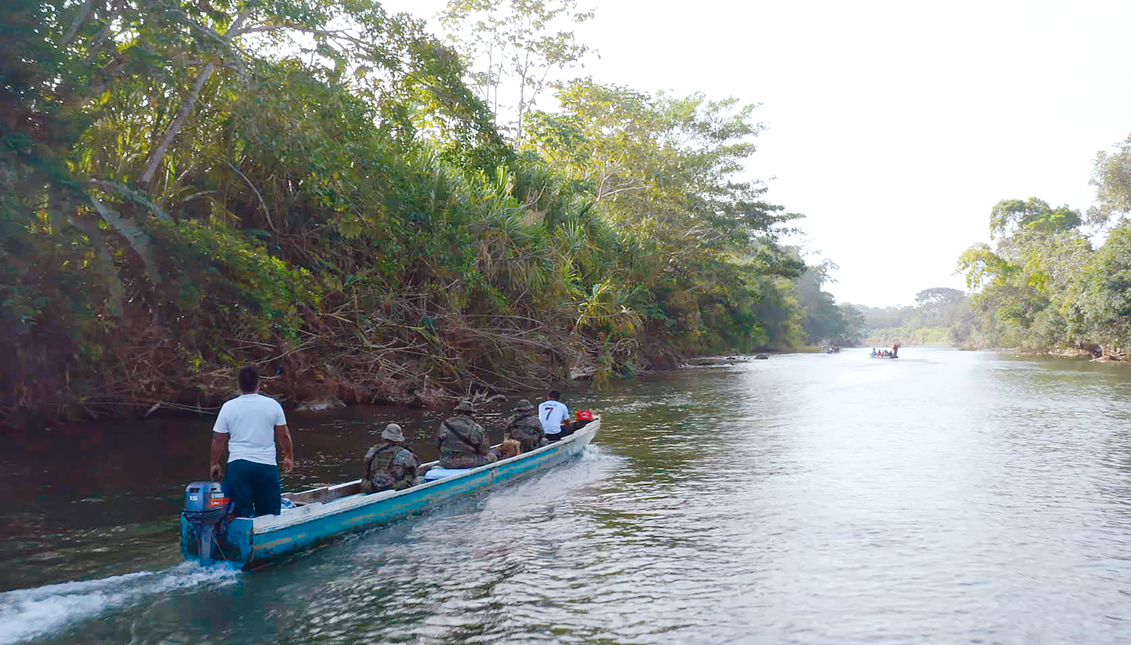 An “abyss and horror of mountains, rivers, and marshes,” in the words of one 16th-century traveler, the Darién Gap is Panama’s Bermuda Triangle: a place where things seem to go wrong more often than everywhere else.   Srdjan Stojiljkovic/VICE News/SHOWTIME
Breaking Stereotypes Through Journalism

“The people who are coming here also have careers, but these kinds of stereotypes have become so pervasive with Trump and continue to damage the image of the migrant. Republicans talk among themselves, but they never ask migrants and asylum seekers, and it is easy for clichés to be created without, for example, Ted Cruz talking to Cubans who have the same origin as his family,” Ramos, whose mother was born in Cuba, she said.

“Through journalism, I try to break the stereotype of who the migrant is at the moment and show the different faces, because the generation of migrants who came to the United States in the 60s and 70s, or my parents’ generation, are forgetting that they were also migrants and are losing that connection with what is happening today. The history of El Darién is not new and the Cuban migrant has been passing through there for a long time”, she said.

Ramos, who also belongs to the new batch of Latinx reporters and activists who are pushing for change in the country and making themselves heard by political leaders, is optimistic about the future.

“At President Biden’s first press conference, 80% of the questions were about immigration and that’s new to me. It’s a reflection that younger activists are making sure that all migrants are taken into account: black migrants, indigenous migrants... It’s a much more united voice than before when it was only about dreamers, and the numbers show that when you put politics aside, Americans tend to be pro-immigration,” she said.

Ramos, who is also the author of the book Finding Latinx (Penguin Random House), in which she explores Latinx identity(ies) through multiple stories across the country, will return to the border this month to understand whether the separation of families experienced under Trump is still being repeated “with another name and another image.”

“I want to understand the process of what it means to train a child to cross only as far as the United States. If it’s the same trauma,” she said.

We live in a time of conspiracies, a time of dialectics and cultural battles that have taken over the discourse on migration in a country built by migrants. When hysteria supplants reason, when, as Ramos reminds us, a congressman like Republican Ken McCarthy can talk about “terrorists crossing the border” and use the same language as QAnon, or Ted Cruz can go to the Rio Grande and blame the cartels for the situation there... When all that happens is when journalism should be more than ever the fourth estate.

To get AL DÍA Print Edition at the comfort of your home, please click here
TAGS
Paula Ramos
Darien
immigrants

The case of Gabby Petito: What is known about the missing van lifer